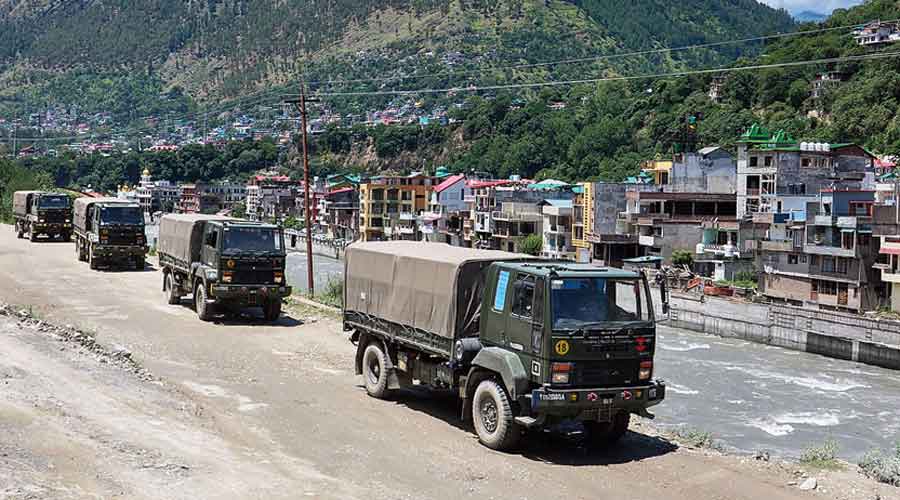 The Chinese army is building highways and roads along with additional settlements for its troops inside India-claimed lines in eastern Ladakh, sources in the security establishment said on Monday.

The development has deepened apprehensions among military veterans and security experts that China may be planning to hold on to the territory it has occupied and declare a news status quo on the Line of Actual Control.

“Intelligence reports suggest that the Chinese army is ramping up its military positions by building additional highways and roads in eastern Ladakh. It has also built new habitats for its troops inside India-claimed lines,” a security official attached to the Union home ministry told The Telegraph.

The Indian and Chinese armies have been locked in border standoffs at multiple points in Ladakh since May last year. China has so far shown no intent of disengaging from occupied territory in Hot Springs and the Depsang Plains, while agreeing to “partial” disengagement on its own terms from the Galwan Valley, Pangong Lake and Gogra.

In these three places, both armies have retreated by an equal distance, with the Chinese still entrenched within India-claimed lines and the Indians stepping back within their own territory – triggering charges of “ceding further land” to China.

“Disengagement from the remaining friction points is expected to be discussed at the next round of corps commander-level talks,” an army official said.

Thirteen rounds of military talks have been held between the two countries so far, with neither side mentioning a return to status quo ante – the original Indian demand – over the past few months. India’s veterans have accused the government of capitulation.

Defence ministry sources said India’s army had made mirror deployment of men and machines along the frontier in the face of the increased Chinese aggression and activity.

Each side now has around 50,000 to 60,000 troops along the Line of Actual Control in the sensitive areas of eastern Ladakh.

“India’s army has been building 73 roads of operational significance along the China border. The only concern is that our pace of work is tardy compared to China’s rapid expansion of military infrastructure in the region,” a defence ministry official said.

Once the roads have been built, he said, there will be faster deployment and better maintenance of the frontier posts.