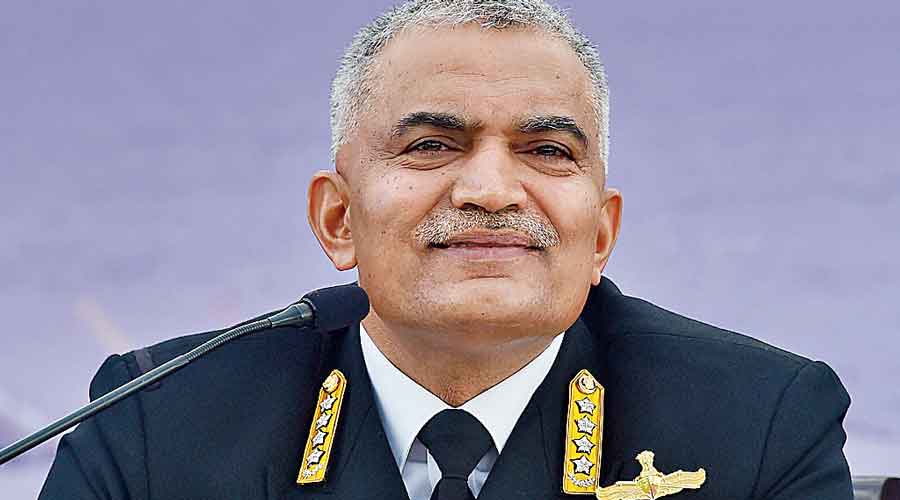 The Indian Navy chief, Admiral R. Hari Kumar, on Friday said the situation on the northern border had added to the security complexities but his force was fully prepared to deal with it.

“The situation on our northern border and Covid-19 have created two complex challenges and the Indian Navy is ready to tackle both,” Admiral Kumar, who took charge on Tuesday, told a news conference. India is locked in a border face-off with China.

The navy was carrying out the acquisition of platforms considering the possible security challenges, he said.

The Indian and Chinese armies have been locked in a border standoff in Ladakh since May last year.

China’s army is estimated to have taken over nearly 1,000sqkm of India-claimed territory.

Admiral Kumar said the Chinese navy had been present in the Indian Ocean Region since 2008 and had seven to eight warships there. “There is constant surveillance by our aircraft and ships and their activities are always kept under watch,” he said.

Sources in the navy said that Chinese naval ships had regularly been coming to the Indian Ocean since 2008 and deploying submarines for anti-piracy operations.

“India is worried about China’s growing influence in the Indian Ocean Region as the Chinese navy is taking an assertive stance in the South China Sea and challenging India’s domination in the region,” an official said.

There is a clear threat from Chinese submarines in the Indian Ocean even though Beijing claims they are there for anti-piracy operations, he said.

In 2019, a Chinese research vessel was driven away from Indian waters near the Andaman and Nicobar Islands as it did not have permission to operate there. The ship was suspected to be on a spying mission.

Sources in the security establishment said India was planning to set up coastal surveillance systems in friendly countries to counter China’s growing presence in the Indian Ocean Region. These systems involve radars meant for maritime surveillance that can easily detect boats, fishing vessels and any illegal activities in the sea.

The coastal surveillance systems are likely to be installed in Bangladesh, Sri Lanka, Myanmar, the Maldives and Mauritius, a security official said.