Children pay a price for play

On Tuesday, police met students and questioned those who had participated in the play 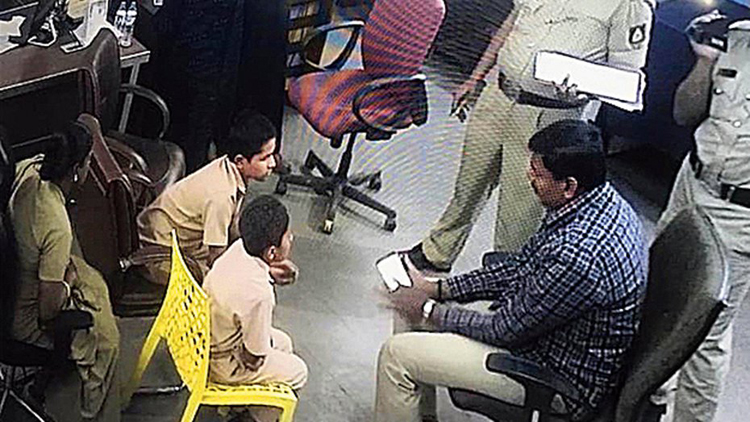 Make no mistake: the world’s largest democracy shows no mercy for staging plays that take a potshot at the Prime Minister.

Ask the 10-year-old pupil of Shaheen Primary and High School at Bidar in BJP-ruled Karnataka. Her mother has been arrested over the play her school had staged in protest against the Citizenship (Amendment) Act.

“Only a child knows how painful it is to live without her mother,” the Class VI student told The Telegraph on Tuesday.

“So far some 80 students and several teachers have been questioned. I really don’t know what they are trying to find out by repeating the same questions over and over again,” Madikeri told this newspaper on Tuesday.

On Tuesday — for the fifth day, no less — the police met students at the school and questioned those who had participated in the play staged on January 21 and those who were among the audience.

The skit, enacted by students of Classes IV, V and VI, had a child saying: “The government is asking Muslims to leave India.”

Responding to this, another child asks the child who plays her mother. “Amma, Modi is asking us to show documents of our father and grandfather. If not, he is telling us to leave the country.”

The mother responds: “If anyone asks for documents, hit them with slippers.”

Although neither the CAA nor the government, including the Prime Minister, has asked Muslims to leave the country, the lines do capture the anxieties swirling around the new citizenship matrix that includes the National Population Register and the proposed National Register of Citizens.

The police have arrested her 26-year-old mother for allegedly scripting the play, and the 52-year-old primary school-in-charge for failing to scrutinise the script before it was staged.

A sedition case has been slapped against the school management, based on a complaint filed by one Neelesh Rakshal, who describes himself as a social worker and farmer.

Policemen have made it a routine to visit the school in the morning and spend the whole day there. After pictures of men in khaki questioning little children went viral, two women from the Child Welfare Council have been present from the third day onwards.

Little action has, however, been taken against Sri Rama Vidyakendra High School, in Dakshina Kannada district, where students had staged a skit in December replicating the demolition of the Babri Masjid.

The school is run by the Sri Rama Vidyakendra Trust, headed by a powerful RSS leader, Prabhakar Bhat. The owner and three others have been booked but no follow-up action has been taken.

The contrast with Shaheen Primary and High School couldn’t have been starker.

“The first time the policemen came to question the students was on January 28, then on the 31st, February 1, February 3 and today again,” CEO Madikeri said, adding the repeated questioning had affected class hours.

“Three constables came at around 10.30am today (Tuesday) and asked for eight students. The deputy superintendent of police, Basaveshwara Hira, who usually comes around 1pm, started the questioning today also. This usually goes on till 4pm,” Madikeri said.

“This kind of questioning will leave a lasting impression on the little minds. I couldn’t have imagined facing policemen when I was their age.”

On Monday, deputy superintendent Hira had told local reporters children were not being questioned. “We are only examining the witnesses who watched the play. This is not an interrogation,” the police officer had said.

He could not be reached for comment on Tuesday. His mobile number remained busy or out of reach.