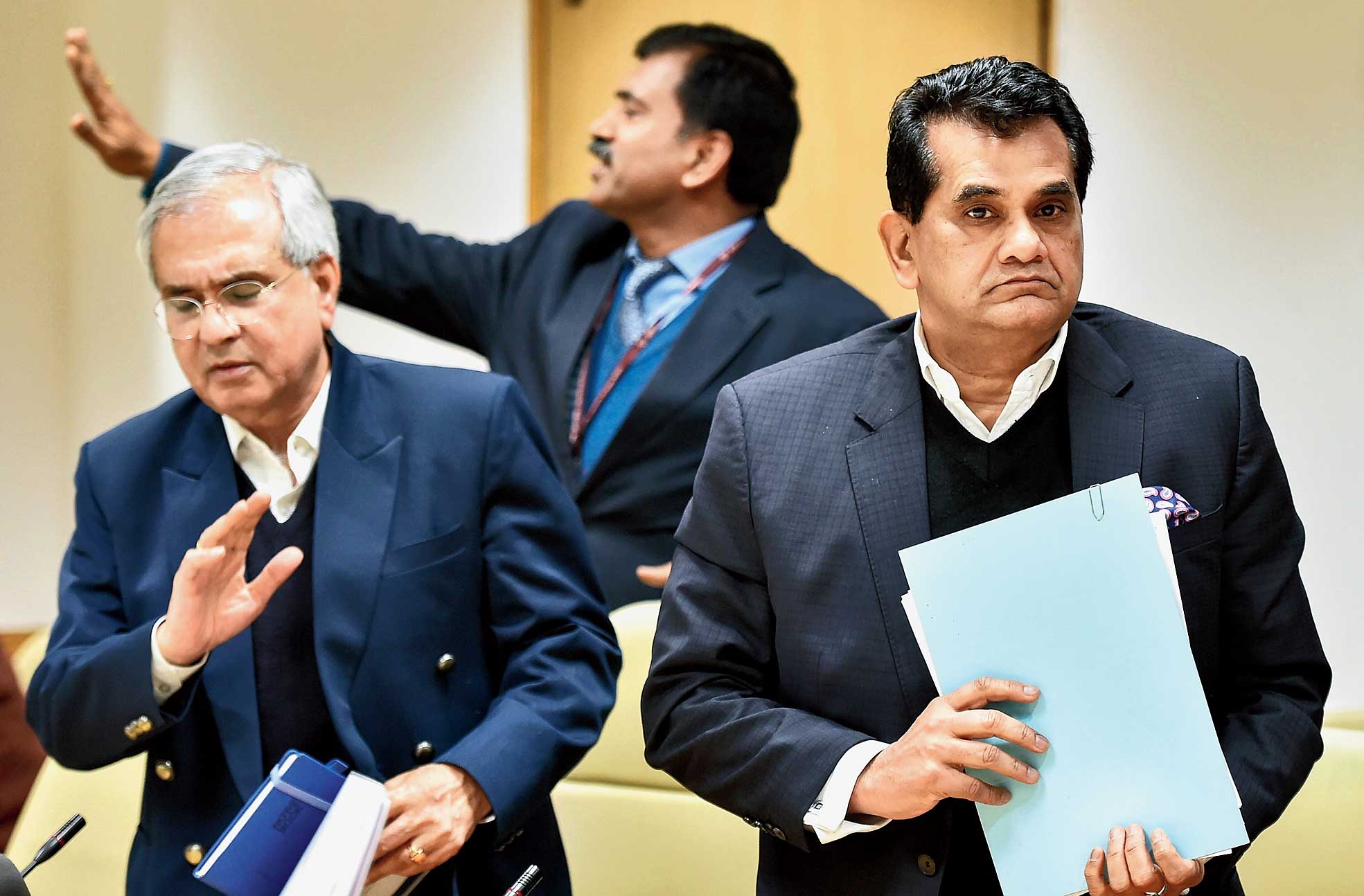 Niti Aayog vice-chairperson Rajiv Kumar, who was fielded by a red-faced Narendra Modi government to play down the controversy over a leaked jobs report that revealed that the unemployment rate in the country had surged to a four-decade high of 6.1 per cent, blew the damage-containment exercise to bits.

Kumar suggested that the Union cabinet would now approve the report before its release, possibly in March. The Freudian slip raised the horrific prospect of government interference in the preparation of the jobs data report, sparking serious worries about the integrity of the entire exercise.

The golden rule in data gathering is that the government never interferes with its collection, analysis and the preparation of the report — a quality of restraint that all previous administrations have tried to display in order to head off criticism of any data fudge.

On Tuesday, two independent members of the National Statistical Commission — P.C. Mohanan and J.V. Meenakshi — had resigned. One of the reasons was a reported disagreement with the Modi government over its failure to publish a report on employment prepared by the National Sample Survey Office (NSSO) that they had approved in early December. Mohanan was also the acting chairman of the commission.

The two NSC members resigned because they felt that the commission was being sidelined by the government and not being allowed to discharge its duties.

Floundering when faced with persistent questioning from reporters about who would now approve the final report, Kumar put his foot in his mouth: “I suppose the cabinet will now approve it.”

When reporters expressed incredulity over this statement, Kumar tried to backtrack: “The government, I suppose. I don’t know.”

Kumar said he had not reached out to the two NSC members who had resigned and tried to suggest that they may have quit because of “personal reasons”.

The burden of Kumar’s defence was that the unemployment numbers, which were reported by the Business Standard newspaper, were part of a draft report and the figures had not been finalised.

The NSSO report had covered the period from July 2017 to June 2018. The Niti Aayog vice-chairperson said the figures for the subsequent quarters — July-September and October to December — had been received and were currently being processed for veracity.

“When the six quarters of data is ready, we will present it,” Kumar said.

“This data (from the leaked report) has not been approved by the government. It is still being looked at. We have to provide on quarter on quarter comparisons. Without two more quarters of data, we cannot calculate the delta (that is, incremental growth between quarters) nor have we been able to check it for veracity.”

He said it was wrong to compare the latest NSSO “draft report” with the quinquennial survey on jobs that were last carried out in 2011-12 because the methodologies were different.

“It is not right to compare the two datasets; this data is not verified. It is not correct to treat this report as final,” he said.

Kumar contended that the Indian economy had consistently grown by over 7 per cent during the four years of the Modi regime despite a dip in credit offtake and private investment. “So, what is the source of this growth? It has to be employment,” he said.

The Statistical Commission had approved the NSSO report and had scheduled it for release on December 19 last year. The government had put it on the back burner because of its embarrassing findings.

According to the NSSO report, the unemployment rate had peaked at 6.1 per cent, the highest since 1972-73. Unemployment was higher in the urban areas (7.8 per cent) than in the rural areas (5.3 per cent). The report also said youth unemployment was at “astronomically high” levels of 13 to 27 per cent.

Kumar said the chief statistician was not present at the media conference because he was away in Lucknow.

The NSSO report ties in with the findings of an earlier study by the Centre for Monitoring Indian Economy (CMIE) which said India’s unemployment rate had shot up to 7.4 per cent in December 2018.

A political slugfest over the suppressed job data took the wind out of the election-oriented President’s address to Parliament through which the ruling dispensation had sought to paint a rosy picture.

“NoMo Jobs! The Fuhrer promised us 2 Cr jobs a year. 5 years later, his leaked job creation report card reveals a National Disaster. Unemployment is at its highest in 45 yrs. 6.5 Cr youth are jobless in 2017-18 alone. Time for NoMo2Go. #HowsTheJobs,” tweeted Congress president Rahul Gandhi, playing with the “NaMo” acronym created for Modi in the run-up to the 2014 polls.

The Congress also used Modi’s own words against him, borrowing from his echo of the film Uri’s dialogue “How’s the Josh” to create the hashtag “HowsTheJobs” to trend the issue of joblessness on social media.

Rahul’s reference to Modi as “The Fuhrer” — German for leader and a word associated with Adolf Hitler — drew a curious response from the BJP. The party likened Rahul to Mussolini in total contradiction to the Sangh parivar’s recorded admiration for the Italian fascist leader. Hindu Mahasabha founder B.S. Moonje had met Mussolini after which the Indian leader advocated the militarisation of the Hindu community.