Centre sets up expert group to recommend a minimum wage

It has given the govt three years to submit its report, prompting allegations of apathy and intentional delay from trade unions and labour policy researchers 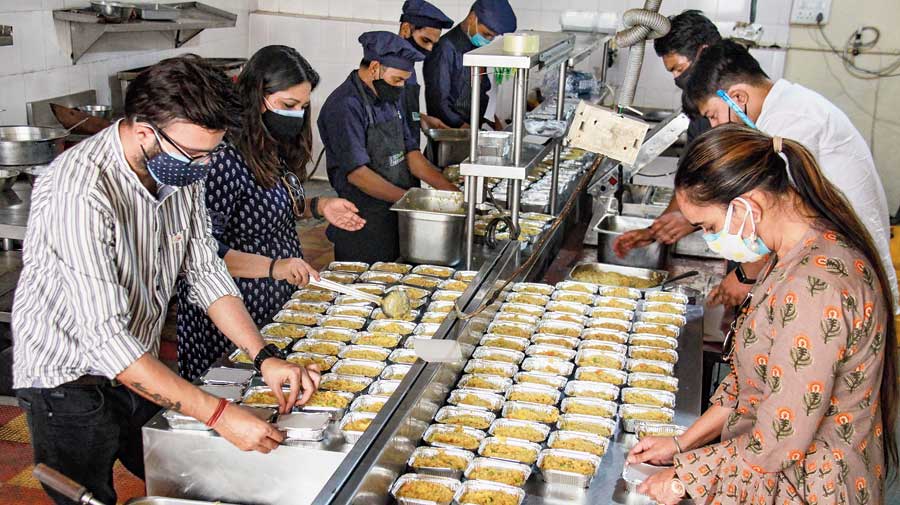 Advocate Neha Chaudhry, her friends and family members pack food for the needy at her residence in Gurgaon on Thursday. Neha has opened a kitchen which prepares around 1,000 food packets daily during the lockdown.
PTI
Basant Kumar Mohanty   |   New Delhi   |   Published 04.06.21, 01:23 AM

The Centre has set up an expert group to recommend a minimum wage and given it three years to submit its report, prompting allegations of apathy and intentional delay from trade unions and labour policy researchers.

An earlier committee had recommended a minimum wage of Rs 375 a day and the constitution of a new panel suggests that the government has not accepted the proposal, they said. The country does not have a stipulated national minimum wage, only an advisory that suggests an amount of Rs 176.

The unions and experts questioned the rationale behind forming a new committee at a time no fresh data, which would be needed to calculate a minimum wage, had been generated since the previous panel submitted its report.

The new committee formed by the labour ministry will be chaired by Prof. Ajit Mishra, the director of the Institute of Economic Growth. The mandate is “to provide technical inputs and recommendations on fixation of minimum wages and national floor minimum wages”.

“The group has been constituted for a period of three years…,” said a media release from the Press Information Bureau.

“To arrive at the wage rates, the group will look into the international best practices on the wages and evolve a scientific criteria and methodology for fixation of wages,” the media release said.

Under the new Code on Wages Act, the Centre has the power to notify a “floor wage” keeping in mind the minimum living standards. The floor wage will serve as the threshold below which no state can prescribe a rate.

The previous committee had calculated the minimum wage rate of Rs 375 based on the July 2018 price level. It had worked out an evidence-based formula that took into account a balanced diet of 2,400 calories, 50 grams of protein and 30 grams of fat per day per person. The panel had also accounted for expenditure towards clothing, education and housing, and multiplied the cost by 3.6 to include the spouse, two children and elderly parents.

A researcher on labour policies said, requesting anonymity: “There is no new evidence or data since the earlier committee gave its report in 2018. This exercise (of forming a new panel) has no relevance and rationale.”

The minimum wage notified by most states is around Rs 200 a day. The Centre has been notifying every second year a National Minimum Floor-Level Wage (NMFLW) that is not binding on the states. The NFLMW notified in July 2017 was Rs 176. A revision is due since July 2019.“The economy has to be revived now. If the government is serious about the economy, it has to increase wages, which is very low compared with the rates in comparable economies,” the researcher said.

He said giving three years to the expert group made no sense. “By the time the report comes, it will be June 2024, when a new government would possibly have come. That government will decide on implementation. This work should not take more than six months since reports are already available for reference,” he added.Labour economist K.R. Shyam Sundar pointed out that no representatives from trade unions and employers had been included in the panel.

Another labour economist alleged that the government had set up the panel under pressure from corporates, who do not want any increase in wages.

Senior labour and employment adviser to the government and member secretary of the committee, D.P.S. Negi said: “The tenure of the committee is three years but it will submit its report at the earliest. The members will look into all related issues and it is wrong to say there are no experts on wage in the committee.”

A pittance: the minimum wage question