Centre: Only one state has reported oxygen death after government inquiry 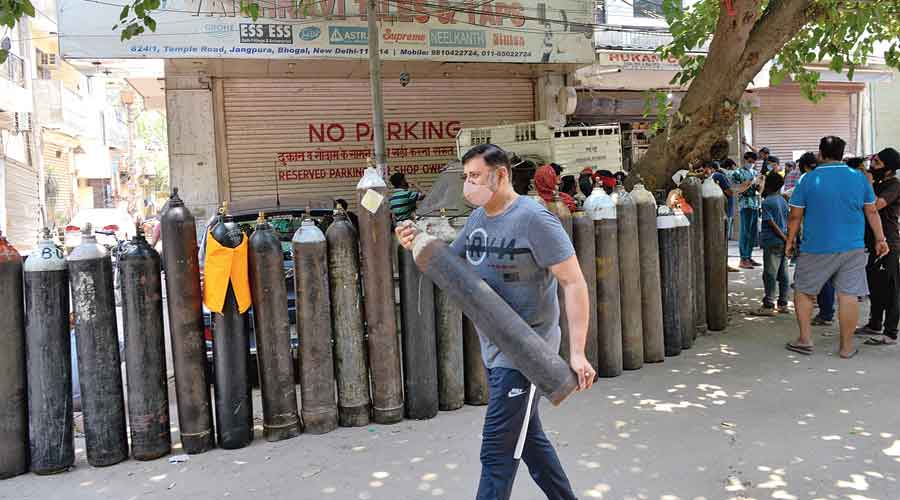 Last month, Opposition parties had hit out at the government for informing Parliament that no deaths due to oxygen shortage have been specifically reported by states and Union Territories during the second Covid-19 wave.
File picture
Our Bureau, PTI   |   New Delhi   |   Published 10.08.21, 08:16 PM

Only one state has till now reported "suspected" death due to oxygen shortage during the second wave of Covid-19 after the Centre sought data from them on such fatalities following the raising of the issue in Parliament, a top official said on Tuesday.

"When the question was raised in Parliament, states were specifically asked this question and as per reports received only one state mentioned suspected death and no state has so far said that there were deaths because of oxygen shortage," Joint Secretary in the Union Health Ministry Lav Agarwal said while replying to a query at a press conference.

According to sources, 13 states and UTs including Arunachal Pradesh, Assam, Odisha, Uttarakhand, Jammu and Kashmir, Ladakh, Jharkhand, Himachal Pradesh and Punjab have responded.

They said only Punjab has reported four "suspected" deaths due to oxygen shortage.

Last month, Opposition parties had hit out at the government for informing Parliament that no deaths due to oxygen shortage have been specifically reported by states and Union Territories during the second Covid-19 wave.

The Centre recently had sought from states and Union Territories data on deaths in connection with oxygen shortage during the second of Covid-19 earlier this year and the information was to be collated and presented in Parliament before the Monsoon session ends on August 13, official sources had said.

It was seen how the people, states and the Centre connected at all levels to increase the medical oxygen supply, he said.

Responding to a question on whether a large number of Covid-19 patients died on roads and hospitals due to acute shortage of oxygen in the second wave, Minister of State for Health Bharati Praveen Pawar on July 20 in a written reply in Rajya Sabha had said that health is a state subject.