Banks and insurance sectors are most hampered 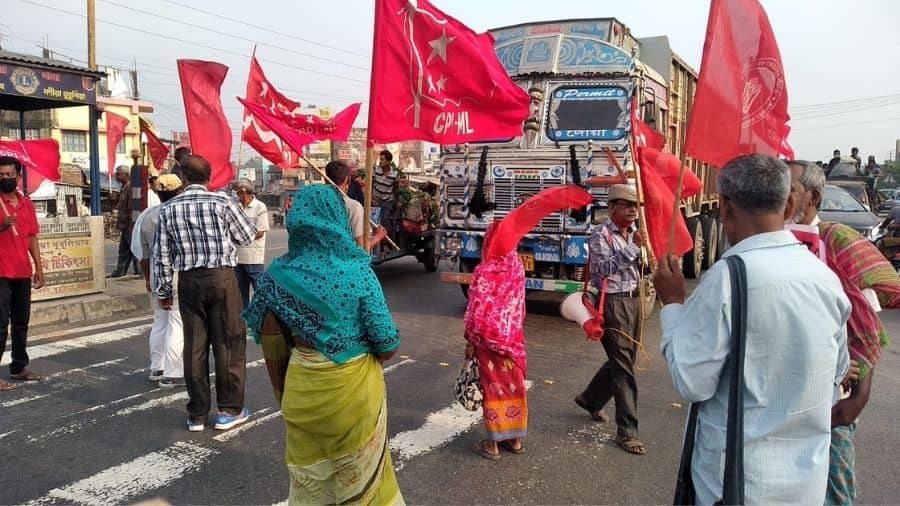 Central trade unions on Monday began a two-day nationwide strike to protest against the government's alleged wrong policies that are affecting farmers, workers and people.

About the impact of the agitation, she said that the entire coal belt (mining area) is affected in Jharkhand, Chhattisgarh and Madhya Pradesh.

The AITUC official noted that the banks and insurance sectors are affected all over India, while steel and oil sectors are also seeing partial impact due to the strike. Kaur said that she has got preliminary reports that markets are closed in Odisha.

Workers of NMDC went on a complete strike at its mine in Bacheli and Bhilai Steel Plant employees also refrained from working, AITUC said. As many as 10 central trade unions (CTUs) have joined hands to go on a two-day nationwide strike from Monday. About 20 crore workers are expected to join the strike.

The strike notices have been given by the unions in various sectors, such as coal, steel, oil, telecom, postal, income tax, copper, banks, and insurance, among others. The unions in railways and defence sector are making mass mobilisation in support of the strike at several hundred spots, the joint forum had said earlier.

A joint forum of central trade unions had given a call for a nationwide strike on March 28 and 29 to protest against the government policies affecting workers, farmers, and people.

Their demands include the scrapping of the labour codes, no privatisation of any form, scrapping of the National Monetisation Pipeline (NMP), increased allocation of wages under MNREGA (Mahatma Gandhi Rural Employment Guarantee Act) and regularisation of contract workers among others.

The central trade unions that are part of this joint forum are INTUC, AITUC, HMS, CITU, AIUTUC, TUCC, SEWA, AICCTU, LPF and UTUC.

Taking cognisance of the call, the Ministry of Power on Sunday had issued an advisory to states and other agencies to be on high alert and ensure round the clock electricity supply and stability of the national grid.

Normal life was disrupted at some places in West Bengal in the wake of a two-day nationwide strike called by central trade unions from Monday.

Transport services were affected in a few districts as protesters blocked roads and halted train movement at some railway stations on the Howrah and Sealdah sections.

Railway officials, however, said there were no reports of any major disruption so far. Operations at offices, educational institutions and commercial establishments were unaffected in most parts of the state, even as the trade unions backed by the Left Front exuded confidence that the strike would be successful on both days.

Banking services were partially impacted as branches in a few areas downed shutters with a section of employees not reporting for duty, while many ATMs remained closed.

However, there was hardly any impact on the functioning of new-generation private sector banks. A joint forum of central trade unions has given a call for Bharat Bandh on Monday and Tuesday, to protest against a number of government policies.

We are expecting participation of over 20 crore formal and informal workers with mass mobilisation across the country on Monday and Tuesday, All Indian Trade Union Congress general secretary Amarjeet Kaur had said on Sunday.

The two-day nationwide strike called by a joint forum of central trade unions began in Kerala on Monday with almost all institutions downing their shutters.

The joint forum has given a call for a nationwide strike on March 28 and 29, to protest against government policies affecting workers, farmers, and people.

State-run KSRTC buses did not operate while taxis, auto-rickshaws and private buses kept away from the roads across the state. Commercial vehicles including trucks and lorries are also not plying expressing solidarity with the strike.

However, the essential services including milk, newspapers, hospitals, ambulances were not affected.

According to media reports from various parts of the state, certain agitators allegedly tried to prevent employees of private firms from reaching their offices.

Meanwhile, police have arranged transport facilities for those who have reached the Thiruvananthapuram Central Railway station to travel to the Regional Cancer Centre.

The two-day strike by the Joint Platform of central trade unions is to protest against "the anti-worker, anti-farmer, anti-people and anti-national policies" of the central government. All employees unions in the state and the country except the Bharatiya Mazdoor Sangh are taking part in the protest.

The protesters on Monday morning tried to prevent some employees from entering Bharat Petroleum Corporation Limited (BPCL) in Kochi. Certain employees tried to enter the BPCL premises as the Kerala High Court had on Friday restrained five trade unions from participating in the nationwide strike. Considering a plea filed by the BPCL challenging the trade unions in the company joining the protest, Justice Amit Rawal had issued an interim order restraining the unions from going on strike according to their call from 7 AM on March 28 to 7 AM on March 30.