Researchers gagged, public presented with misleading pictures of the epidemic’s mode of spread in the country 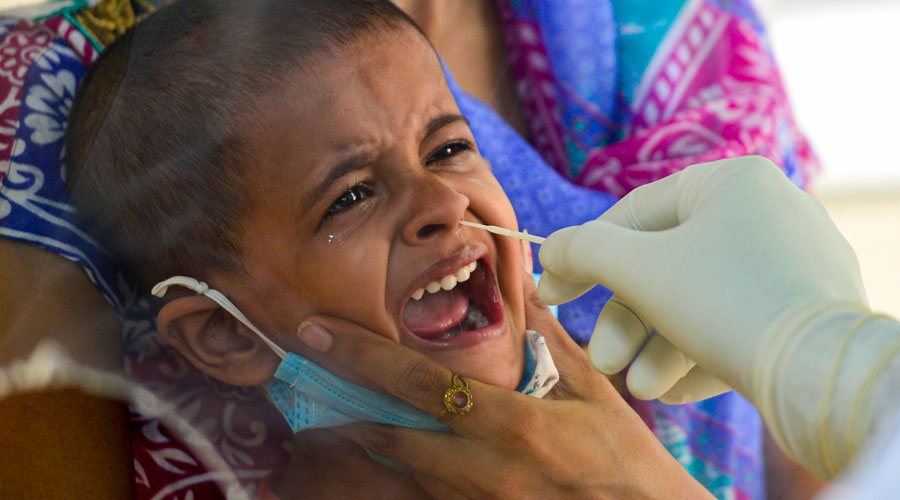 Officials of the Union health ministry had in early April blocked public disclosure of the names of 36 districts where researchers had found evidence of community transmission of the new coronavirus, three experts guiding India’s pandemic response have said.

Amid health officials’ persistent denial of community transmission, 16 of those 36 districts, covering areas in Calcutta, Chennai, Delhi and Mumbai among others, have emerged among places hit the hardest by Covid-19 in India, the experts said.

The experts’ disclosures to The Telegraph suggest that the health officials had gagged researchers and presented the public with misleading pictures of the epidemic’s mode of spread in the country, while denying community transmission — person-to-person spread of the infection where the source is difficult to trace.

Some clinician-researchers view the denials of community transmission by senior officials in the Union health ministry and the Indian Council of Medical Research as a breach of ethics.

Others contend that misleading information, coupled with testing strategies that did not screen patients with influenza-like illness (ILI) everywhere in the country until June 23, may have fuelled the epidemic’s spread by inducing complacency rather than enhanced vigilance.

Multiple experts within and outside the government believe that the efforts to withhold information about community transmission reflect bureaucratic and other influences.

“Bureaucrats rule over researchers, chairs matter more than evidence,” said a public health analyst and panel member guiding the government on Covid-19. “We are helpless. What can we do? We can cry.”

The Union health ministry and the ICMR, the country’s apex health research agency, did not respond to queries from this newspaper on these concerns.

Nudged by the ministry, the Centre and the states have established over 320,000 hospital beds, 128,000 oxygen-supported beds, 35,000 intensive care unit beds, and more than 21,000 ventilators for dedicated Covid-19 care.

States and districts grappling with large outbreaks have received guidance from the ministry on testing, contact tracing, surveillance, quarantine and home isolation.

“India took all the necessary steps well in time,” health minister Harsh Vardhan had said earlier this year. “I think we did our best and we did well. We are learning and are confident of doing better.”

Many experts agree with Vardhan. India probably did its best given its meagre public health resources and the myriad constraints on its pandemic response, they say, and the health ministry has therefore no reason to deny community transmission.

“Somehow this completely wrong notion has crept in that admitting community transmission means the administration is at fault or we’re all doomed,” a senior government official and member of the national task force on Covid-19 said. “It’s hard to dislodge it — so we keep hearing, ‘no community transmission’.”

In early April, researchers with the ICMR and the National Centre for Disease Control (NCDC) had tested patients hospitalised countrywide with severe acute respiratory illness (SARI) not attributed to an obvious disease.

The researchers examined throat and nasal swab samples from 5,911 SARI patients hospitalised for treatment of respiratory distress, not Covid-19. The results of the survey were awaited eagerly.

India had till April 2 recorded 2,301 Covid-19 cases and 50 deaths. Every patient then had a foreign travel history or contact with a patient. The health ministry asserted that the virus was spreading only along chains of contacts.

But the survey found 102 SARI patients infected with SARS-CoV-2, the virus that causes Covid-19. Forty patients across 36 districts in 15 states had neither a foreign travel history nor contact with any positive case. Some Covid-19-positive SARI patients were from districts without any reported coronavirus infection.

The researchers viewed this as evidence of community transmission. The virus had entered the 36 districts stealthily. Each Covid-19-positive SARI patient possibly implied at least three or four others with mild symptoms spreading the virus.

The ICMR-NCDC team decided to publish the findings in the Indian Journal of Medical Research but initially faced resistance from health officials.

“At one point, we weren’t even sure we’d be allowed to publish,” a senior researcher said, declining to reveal who had objected to the publication.

Eventually, the officials relented but asked the researchers not to name the 36 districts. The paper was published on April 9 in the IJMR without a table listing the districts.

Local authorities in the 36 districts and the states concerned were, however, informed and asked to take strict containment measures, a health official who requested anonymity said.

But officially, the health officials continued to deny community transmission.

By early June, 16 of the 50 districts or municipalities with the largest outbreaks in India turned out to be from the group of 36 identified by the SARI survey, an expert familiar with both the lists said.

A nationwide ICMR survey in May to look for previous exposure to Covid-19 found antibodies against SARS-CoV-2 in healthy people in dozens of districts. In some locations, up to 30 per cent of the people surveyed carried antibodies.

The findings implied that tens of thousands of people across India had contracted the virus and recovered without even knowing it, marking fresh evidence of community transmission.

To resolve any ambiguity, an ICMR panel that coordinated the survey told agency director-general Balram Bhargava that community transmission was occurring in the country, a researcher told this newspaper.

Yet on June 11, Bhargava again asserted at a health ministry media briefing that there was no community transmission in India.

Members of the ICMR panel were baffled. “That is not our interpretation,” a senior researcher said.

Health officials have continued to deny community transmission – the latest denial coming on July 9 – claiming the debate is irrelevant and mere semantics.

They assert that what counts is ground actions – early case detection, contact tracing, isolation of patients and quarantine of contacts.

The ICMR expanded the testing regime to ILI patients everywhere in India only on June 23, more than two months after researchers had detected community transmission in 36 districts. Until June 23, only those ILI patients who lived in containment zones were eligible for Covid-19 tests.

Without tests for all ILI patients in districts with community transmission, infectious disease experts say, the virus may have spread more easily from person to person, fuelling the epidemic’s growth.

“Those who prevented the names of the districts from reaching the public need to own moral responsibility for the extra deaths there,” said a public health expert and member of a government panel on Covid-19, requesting anonymity.

Sanjay Rai, professor of community medicine at the All India Institute of Medical Sciences, New Delhi, and president of the Indian Public Health Association, said that once community transmission has been detected, the focus should turn to “mitigation”.

The public disclosure of community transmission, experts say, is also critical to making people aware of the need to protect themselves through physical distancing, masks, and other safeguards.

The health ministry has since late March asked people to wear face masks, maintain physical distancing, and take other precautionary steps. But experts say the simultaneous denial of community transmission has been tantamount to “contradictory messaging” to the public.

“There are two ethical issues. The first is the suppression of facts about an infectious disease from people and the health system,” said Amar Jesani, a Mumbai-based physician, biomedical ethics specialist and editor of the Indian Journal of Medical Ethics.

“The second ethical issue emerges from the consequence of concealing information: local people when told about community transmission may adopt stringent precautions such as physical distancing or face masks. If they’re not told, people may lower their guard.”