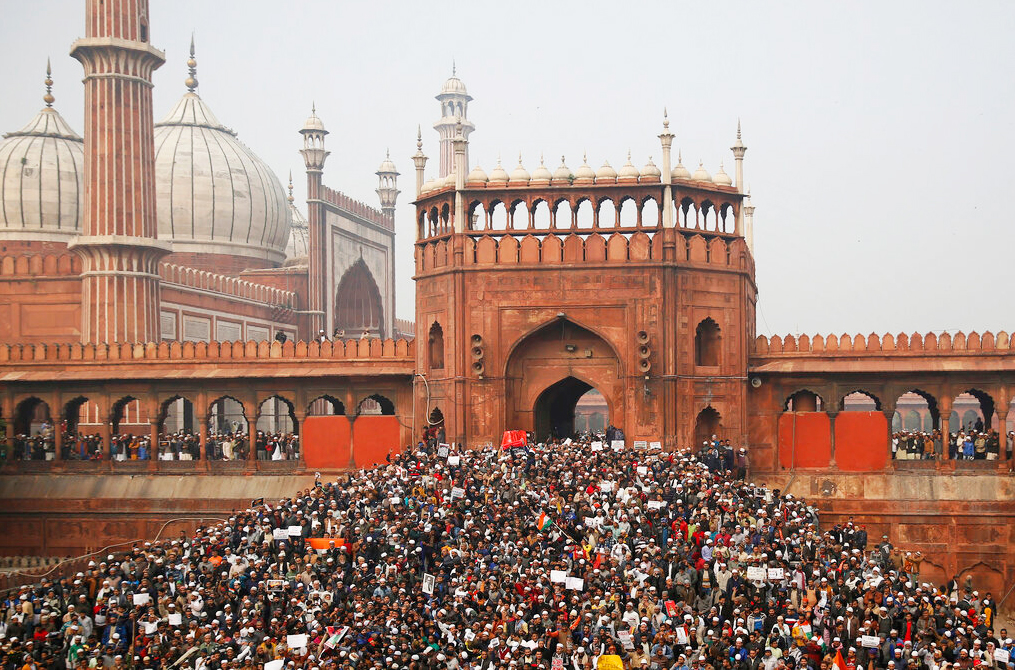 Sarfraz Alam shuddered as he recounted how policemen had attacked protesters “mercilessly” with batons near Delhi Gate on Friday evening.

He believes a “conspiracy” by mischief-makers, who engaged in arson and stoning, set up the police “barbarity”.

By the time the beatings were over, he said, bloodstains marked the streets where people lay with broken arms and legs, pleading for mercy.

“I saw a middle-aged man in a skullcap drop to his knees and beg for mercy but the police kept raining batons on him. Blood trickled from the side of his mouth and his right hand. That was the most horrifying moment,” Sarfraz, 28, said on Saturday afternoon, standing outside Daryaganj police station not far from the Jama Masjid.

The beatings came after a group of marchers from outside the Jama Masjid — where the protest had been peaceful — were stopped at Delhi Gate. Stone throwing followed and a vehicle was torched.

“Thousands had gathered outside and around the Jama Masjid and the protest was peaceful,” said Sarfraz, who had been camping outside Daryaganj police station since Friday night, frantically appealing to the police to release his cousin Razaullah, 25.

“But as soon as dusk fell, some mischief-makers torched a vehicle near the police station and threw stones, prompting the police to attack peaceful protesters. Why had the mob violence not taken place during the day? It was a conspiracy to target the protesters.”

Other eyewitnesses who spoke to The Telegraph too accused hoodlums of triggering the violence under the cover of darkness.

Video footage on social media appears to show policemen charging at people with batons and beating them without any provocation.

A statement issued by the Jamia Coordination Committee of the Jamia Millia Islamia condemned the police “brutality”.

“While media reports quoted the police as having used ‘minimum force’, independent reports, photos and videos show otherwise — an intention to inflict severe injuries on the protesters,” the statement said.

“They were badly beaten up, and legal (and) medical aid was denied to them. Forty people were detained, including eight minors…. This completely dismantles the police’s narrative.”

Arshad Alam, a resident, said: “The police not only targeted peaceful protesters but also local people trapped in the crowd. After the beatings, they picked up several people, including minors, at random and took them to the Daryaganj and Jama Masjid police stations.”

Sarfraz, an Uber driver, and his cousin Razaullah, a tailor, both residents of nearby Shastri Park, had gone to the Jama Masjid in the afternoon to offer namaz.

“After the prayers we decided to take part in the peaceful protest. As soon as (a group of marchers) reached a spot near Delhi Gate around 6pm, we heard someone had torched a vehicle,” he said.

“It was chaos all over. A large number of policemen came running, swinging their batons. I somehow managed to flee across the road but my cousin fell and the cops got hold of him, beat him up and bundled him into a van. I saw it from a distance and hid inside a lane.”

Residents of the Muslim neighbourhood said the police returned at night looking to pick up more youths but some community leaders intervened.

“The cops were abusing the community and threatening they would teach them (the youths) a lesson they would never forget,” said Junaid, a resident.

A schoolteacher said the police detained 40 people, including eight minors, at Daryaganj police station and refused to let them meet their families.

Late at night, a group of lawyers and civil rights activists approached chief metropolitan magistrate Arul Verma, who directed the Daryaganj station house officer to allow lawyers to meet the detainees and provide them legal remedies.

Verma further directed the SHO to provide the necessary medical care to the injured detainees. He pulled the police up for detaining minors.

“He said the detention of minors in a police station was a flagrant violation of the law,” a rights activist said.

Early on Saturday, the police said the eight minors had been released. Some of the adults were still being held in the evening.