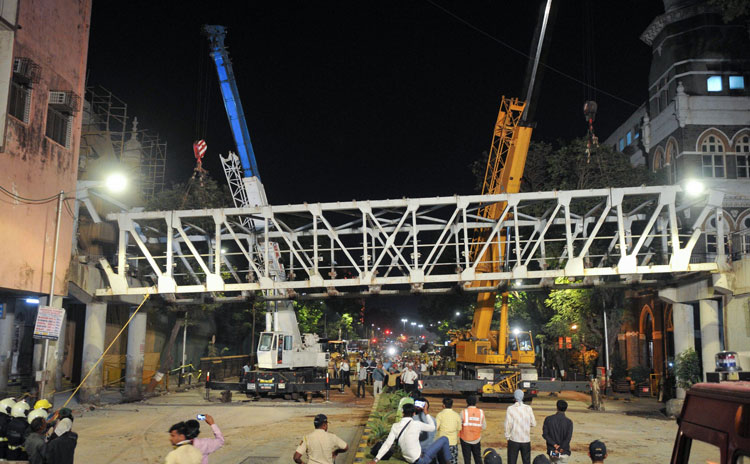 Police have lodged an FIR, with the provision to add names later, blaming the Brihanmumbai Municipal Corporation for Thursday’s collapse of the Himalaya foot overbridge near the Chhatrapati Shivaji Maharaj Terminus that has claimed six lives and injured 30.

The civic body, responsible for maintaining the bridge, announced its own probe but demolished the collapsed structure, prompting Opposition allegations that it was “destroying evidence” to protect errant officials.

Chief minister Devendra Fadnavis told reporters that he had asked for the names of the civic officials responsible for the cave-in by Friday evening.

A case has been registered under Indian Penal Code sections 304A (causing death by negligence) and 338 (causing grievous hurt).

Thane resident Mohan Kayangude, 55, who worked in a jewellery store in Zaveri Bazar, became the sixth victim when he died of his injuries late on Thursday night. Another injured, Dilip Parekh, is critical.

The civic body ordered two separate inquiries of its own after Fadnavis pulled up its bosses.

Civic commissioner Ajoy Mehta has instructed the chief engineer (vigilance) to identify the officials who had done the safety audit of the bridge and certified it fit. The report has to be submitted by Saturday.

The second inquiry will identify the cause of the accident apart from finding out details such as how well the bridge had been maintained, whether the safety audit was carried out in time, and what methodology had been used.

Fadnavis visited the St George Hospital, where some of the injured are being treated, on Friday morning.

“I met around 10 victims. One of them is in the ICU. The others are out of danger now,” he told reporters.

“I have given the BMC commissioner time till this evening to give (me the) names (of the officials) responsible for the accident. That the collapse took place even after a structural audit has raised questions. A foolproof probe will be carried out.”

But the demolition of the remains of the collapsed overbridge invited the question how the civic body or the police would conduct their probes without studying the post-collapse condition of the bridge.

Mumbai Congress president Sanjay Nirupam said: “The decision to demolish the bridge seems to have been taken to destroy evidence of negligence. Why couldn’t they wait till the probe was over?”

Milind Deora, former MP and the Congress’s South Mumbai candidate for the Lok Sabha polls, highlighted the bridge’s closeness to the civic headquarters and said its collapse therefore reflected “the height of civic apathy”.

He questioned the need for high-profile projects like the Bullet train between Mumbai and Ahmedabad — one of the Narendra Modi government’s showpieces — when the government couldn’t guarantee the safety of a footbridge.

“What use would a Bullet train be if Mumbai can’t even get safe foot overbridges? The basics should be fixed first,” he said.

Congress ally Nationalist Congress Party too called for the Bullet train to be scrapped.