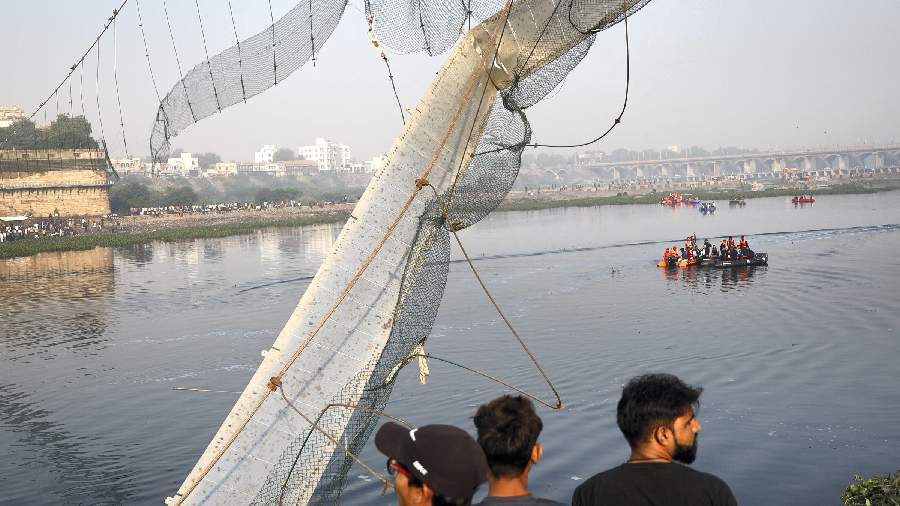 The Morbi municipality has appealed to the Gujarat government to return documents seized by a special investigation team (SIT) probing the collapse of a bridge in the town so it could respond to the government's show-cause notice asking why the civic body should not be dissolved over the tragedy, which claimed 135 lives.

All the documents are with the government-appointed SIT and the Morbi municipality does not have any document, an official from the civic body has said. The British-era suspension bridge on the Machchhu river in Morbi collapsed on October 30, 2022. The Gujarat government last week issued a show-cause notice to the Morbi municipality asking why it should not be dissolved for failing to discharge its duties.

In the notice, the state Urban Development Department directed the civic body to submit a written clarification in the form of a general body resolution by January 25.

The bridge was maintained and operated by the Oreva Group as per an agreement signed with the Morbi municipality.

The 52-member Morbi municipality held a meeting on Monday and passed a resolution urging the government to return documents seized by the (government-appointed) SIT so it could respond to the government's show-cause notice, the civic body's vice president, Jayrajsinh Jadeja, told reporters after the meeting.

All the 52 elected representatives of the Morbi Municipality are from the Bharatiya Janata Party (BJP), which is in power in the state.

"Since all the documents are with the SIT and the Morbi municipality does not have any document, the municipality passed a resolution urging the government to return them as soon as possible so that it could reply to its notice," Jadeja said.

In the notice, the Urban Development Department said the previous contract to operate the bridge expired in 2017. Between 2018 and 2020, the Oreva Group had written several letters to the Morbi municipality warning about the dilapidated condition of the bridge and also cautioned that a serious accident may occur if the bridge remains open to the public in such a condition.

However, the civic body did not take cognisance of such warnings by the company, the notice said.

Moreover, the municipality did not take any concrete action to take over the bridge from the company in 2017 after the completion of the contract and remained inactive despite knowing the situation of the bridge, it said.

Notably, the state government had on December 13 told the Gujarat High Court, which took cognisance of the tragedy on its own and registered a public interest litigation (PIL), that it had decided to dissolve the municipality. The court had turned down the plea of the civic body members to be impleaded as a party in the case.

Nine persons, including four employees of Ajanta Manufacturing (Oreva Group), have been arrested so far in the case.

They include two managers and as many ticket booking clerks of the Oreva Group that was managing the British-era bridge.

The SIT had cited several lapses on part of the Oreva Group in repairs, maintenance and operation of the carriageway.

A Gujarat court last week also issued an arrest warrant against Jaysukh Patel, managing director of the Oreva Group, after getting an application for the same from police under section 70 of the Code of Criminal Procedure.

Patel, who is not named as an accused in the FIR, had moved the Morbi sessions court on January 20 for anticipatory bail fearing arrest in the bridge collapse case. The hearing was adjourned till February 1 as the public prosecutor was not present.