At least three protesters were killed in suspected police firing and thousands defied curfew in Assam on Thursday as a backlash against the Citizenship Amendment Bill (CAB) escalated in spite of the Prime Minister seeking to allay the fears of “my brothers and sisters” in the state.

Talukdar identified them as Dipanjal Das of Lachitnagar and Sam Stefford of Hatigaon. Both places are residential neighbourhoods in Guwahati. Das and Stefford were among 21 admitted to the hospital with injuries, he added.

Talukdar appealed to the protesters to exempt medical services as the functioning of the hospital was being hampered.

Thursday’s protests appeared to be more intense than on Wednesday when thousands of students had poured out to register their protest when the Rajya Sabha was debating the bill that was passed at night.

The protesters are demanding exemption for entire Assam from the purview of the bill to preserve its demographic balance and cultural identity. 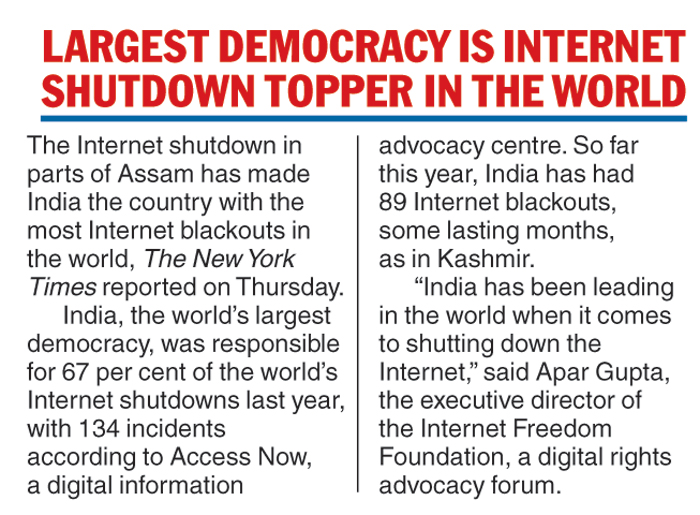 The nature of the protest as well as the response seemed different on Thursday, and parallels with Kashmir were not hard to miss. Appeals for peace have been issued by almost all stakeholders, including the government as well as the leaders of the protesting students. By nightfall, an eerie silence enveloped most of Guwahati, although the GaneshguriKhanapara stretch witnessed protests and the BJP office was gheraoed from two sides.

The police administration went through a shakeup and the army presence has been stepped up. Guwahati police commissioner Deepak Kumar was replaced by Munna Prasad Gupta. G.P. Singh, an inspectorgeneral with the National Investigation Agency (NIA), has been sent to Guwahati to “take charge” of the situation as ADG (law and order).

At Lachit Nagar in Guwahati, a kilometre away from the police headquarters, a protester was critically injured in police firing.

He later succumbed to his injuries at Gauhati Medical College and Hospital here.

Directorgeneral of police Bhaskar Jyoti Mahanta, whose convoy was allegedly stoned, said: “The youngsters need to maintain peace while protesting and abstain from damaging public property. The police will be forced to apply force if there is an unruly mob.”

*A striking feature on Thursday was the way the people brushed aside curfew, which has been extended by 48 hours, and flooded the roads. A rally called by the influential All Assam Students’ Union (AASU) on the Latasil Field drew a huge turnout.

The deployment of an additional 5,000 central troops to aid the state police, could not stop the rally, which was attended by singer Zubeen Garg, among others.

AASU declared that December 11, the day the “unconstitutional” CAB was passed, would be observed as Black Day in the entire northeast.

*The protesters are increasingly focusing their ire on not just representatives of the government but also those who they think have betrayed the cause. The headquarters of the Asom Gana Parishad (AGP), the party whose founders trace their roots to the Assam Agitation of the 1970s and 1980s, in Guwahati witnessed a big protest. The AGP, a BJP ally that supports the bill, also suffered some departures from the leadership during the day.

*The unrest has also spread to Meghalaya, the only other northeastern state other than Assam and Tripura that has not been fully exempt from the bill. Curfew has been imposed in Shillong from 10pm on Thursday. Across Meghalaya, mobile Internet services have been suspended for 48 hours from 5pm on Thursday.

Firebrand KMSS leader Akhil Gogoi was arrested in Jorhat as a preventive measure.

“I want to assure my brothers and sisters of Assam that they have nothing to worry after the passing of #CAB. I want to assure them — no one can take away your rights, unique identity and beautiful culture. It will continue to flourish,” Modi tweeted in the morning. It was retweeted by Union home minister Amit Shah, the aggressive champion of the bill.

In Guwahati, the AASU leadership and leading citizens also appealed for peace. AASU adviser Samujjal Bhattacharjya said that people should be prepared for a longdrawn agitation. They should hold peaceful protests as vested interests will be trying to derail the protest by creating unrest, Bhattacharjya said. AASU is organising a mass fast protest on Friday too.

Like Guwahati, the curfewbound Dibrugarh too remained on the boil through the day with the police opening fire at several places to contain protesters who set on fire Chabua’s UBI building and MLA Binod Hazarika’s residence.

In the morning, the protesters besieged the residence of chief minister Sonowal in Dibrugarh. The police fired blank bullets to disperse the protesters. Incidents of violence have been reported from several areas of the district.

The protesters vandalised the RSS office and a bus terminus in Dibrugarh and set afire two motorbikes.

Barak Valley, which has a significant Bengali population, was comparatively peaceful but blockades on the GuwahatiSilchar and AssamMizoram roads were reported.