BJP prays for wave to retain Kushinagar in Uttar Pradesh

The politically ignorant Musahars don't know the name of any leader except Modi, whose publicity was matchless 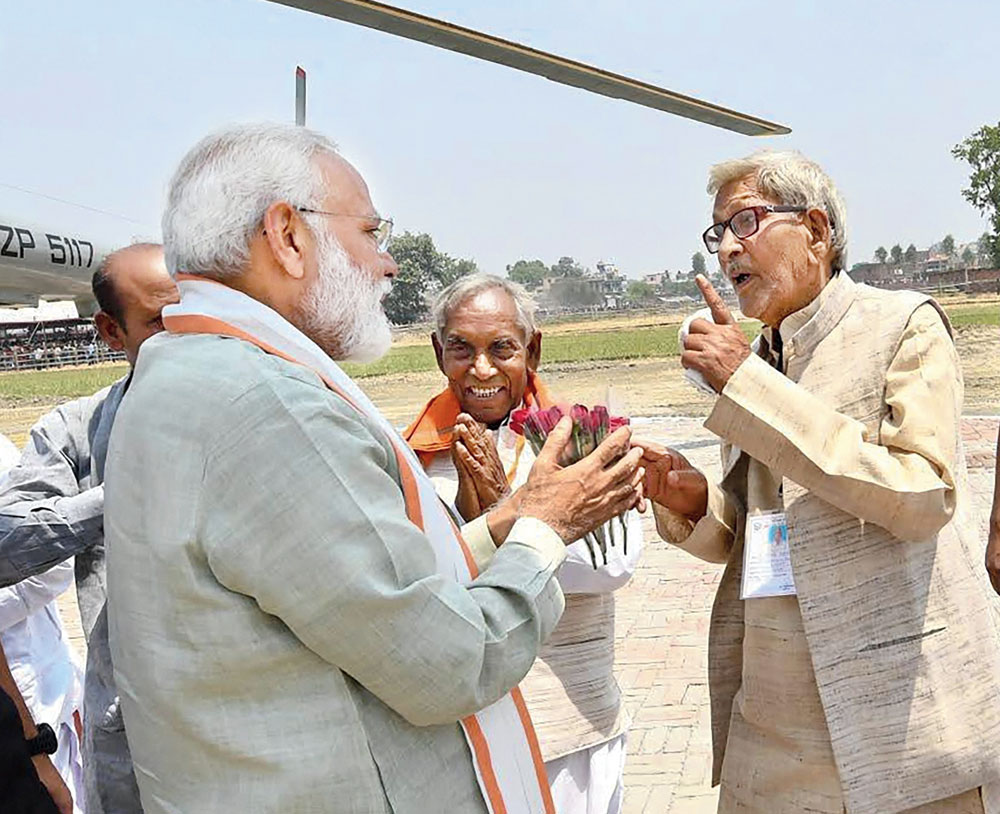 Asked what he would do, Awatar told The Telegraph that although he has yet to decide whom to support, he wouldn’t vote for the SP-BSP alliance. “Why should I vote for a party of the Yadavs when those caste men thrashed me,” he said. “We still have time to chose between the remaining two.”

He also said: “Modi has given us toilets.”

A toilet was constructed in front of every hut in Gurumiha Mafitola in the last two years.

“This doesn’t mean that the BJP nominee is going to win,” said Brijesh Govind, a local political observer. “Visit the villages at night and you will see an undercurrent in favour of the king in the conversations.”

The king here is RPN Singh of the Congress. He is the head of the erstwhile princely estate of Padrauna in the district. The former MP of Kushinagar (2009) and former minister of state for home affairs in the second UPA government had lost in 2014 in the Modi wave.

A BJP source said Rajesh Pandey, the incumbent party MP who had defeated Singh in 2014, had not won over too many friends among the electorate and faced allegations of land grabbing. “We will win if there is any wave for Modi and lose if it is not there,” a BJP leader said under cover of anonymity.

The only Muslim candidate is Md Usman of the Peace Party and some local residents believe it is part of the “micro-management” of the BJP, which is trying to divide the Muslim vote to weaken the Opposition.

Kushinagar is the land of the Buddha’s parinirvana (nirvana after death). But the only politician to make a passing reference to the Buddha here was Modi.

Kushinagar votes on May 19

Ram Awatar was thrashed twice in the last two weeks; once when he said he would vote for Narendra Modi and the second time when he said he wouldn’t. Now, the 65-year-old rat-hunter stays silent on voting preference in his Gurumiha-Mafitola hamlet of village Kudwa Dilip Nagar in Kushinagar and is thinking what he and the 25,000 Musahar voters should do at the polling booth.

“Some members of the OBC, specially the Yadavs of the district, are new supporters of Modi and they want the Musahars to vote for the BJP nominee (Vijay Kumar Dubey),” said Ram Briksha Giri, a social worker who has been working for the Musahars of Kushinagar for a decade. “First, the elder Yadavs attacked Awatar believing that although he was claiming his support for the BJP, he was actually a voter of the SP-BSP alliance candidate (Nathuni Prasad Kushwaha). Next time, Yadav youths beat him up so that other Musahars learn a lesson and vote for Modi’s candidate only. Yadavs are traditionally considered voters of the SP. So Awatar, who is politically little aware about the new equations, will never vote for the SP-BSP candidate if they are beating him.

“And this is exactly what the Yadavs want Awatar and other Musahars to do,” explained Giri, adding that the attacks were an indication that the elders and the youths have different methods but a common motive — of helping Modi.

“The Yadavs of the constituency are claiming that SP chief Akhilesh Yadav belongs to the Kamariya sub-caste, which doesn’t do the work of a gwala (cow herder). The Yadavs of Kushinagar mostly belong to the Ghosi sub-caste and they are gwalas. They used to support the SP but have shifted to the BJP because of this new analysis of Yadav caste in this region and the nationalistic euphoria created by Modi,” said Giri.

This argument was heard in the past in central UP districts of Etawah, Firozabad and Mainpur, political strongholds of SP founder Mulayam Singh Yadav.

“The Musahars believe that those who thrashed Awatar are anti-BJP. So now they are preparing to vote for the BJP with greater conviction,” said Giri.

He claimed that the politically ignorant Musahars didn’t know the name of any leader except Modi, whose publicity was matchless.

The experts say they are called Mus-ahar (rat’s food or rat as food) because they collect the remains of food grains from rat holes in harvested agricultural fields and because they eat rats.