Saffron leader however, has not revealed the names of alleged conspirators so far 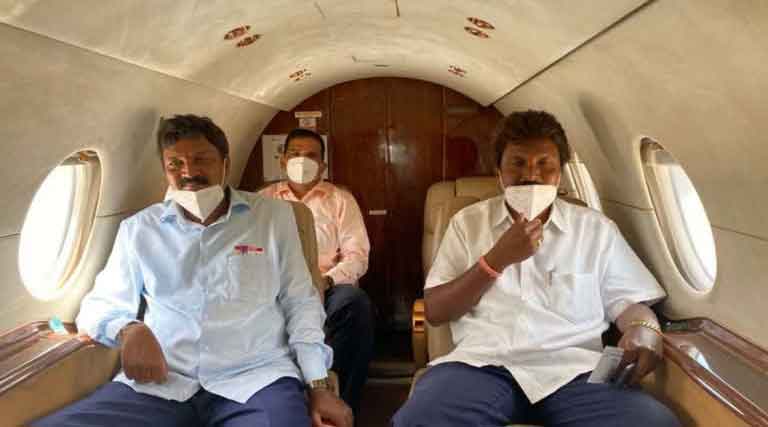 Former Minister and BJP MLA Ramesh Jarkiholi on Thursday claimed that the same team of conspirators were behind the 'sex CD scandal' involving him and the suicide of contractor Santosh Patil, the case in which Karnataka Minister K S Eshwarappa has been booked for abetting, as he demanded a CBI probe into both issues.

Noting that he will reveal certain facts regarding the case at a press meet on April 18, after getting permission from the BJP high command, he said Eshwaraapa should not resign until he is proven wrong.

The BJP leader however, has not revealed the names of alleged conspirators so far.

"I don't want to talk much, as I'm amidst family members who are grieving. I want to say that on Monday at 11 AM, I will hold a press meet, after talking to our high command. Same conspirators team is behind both Eshwarappa and Ramesh Jarkiholi (cases), I want to reveal it. I will speak after taking permission from the high command," Jarkiholi said.

Speaking to reporters here, after offering his condolence to Santosh Patil's family, he said, Eshwarappa should not resign, until his alleged involvement or wrong doing is proved.

"....I have suffered for the last one year because of a conspiracy against me, it should not happen to Eshwarappa, if he is wrong, let the court give him any punishment...I know what has happened behind, some people are trying to play politics," he added.

In March last year, news channels had aired videos of the alleged sex scandal, involving Jarkiholi, who was then the Water Resources Minister in Chief Minister B S Yediyurappa-led cabinet. He had subsequently resigned and has repeatedly claimed that he was innocent and that the video was "fake".

Meanwhile, Santosh Patil, a Belagavi-based contractor was found dead in an Udupi hotel on Tuesday, weeks after accusing Eshwarappa, who is also a senior BJP leader, of corruption. In a purported suicide note in the form of a WhatsApp message, Patil has blamed Eshwarappa for his death.

Further, raising questions about Santosh Patil's suicide, Jarkiholi said, "He had made a phone call to Nagesh (one of his associates) a few days ago and had said that Ramesh Jorkiholi will soon become a Minister with the Rural Development Ministry as portfolio and things will be good...why will he die? there is a question mark....I will reveal things on Monday."

Urging that his CD case and Santosh Patil's death have to be handed over to CBI for probe, he said, "...if both are given, the probe will reveal the Mahan Nayaka, who is behind it....it is the same team (in both cases).... let me not take names now, it will be wrong."

Jarkiholi earlier too had hinted about involvement of a "Mahan Nayaka" (great leader) behind the video clip allegedly involving him and its leak, and had accused state Congress President D K Shivakumar for indulging in a "filthy conspiracy".

Reacting to Jarkiholi's fresh claims, Shivakumar in Bengaluru said, "he should be first arrested...let him do whatever they want, we are ready for everything..."