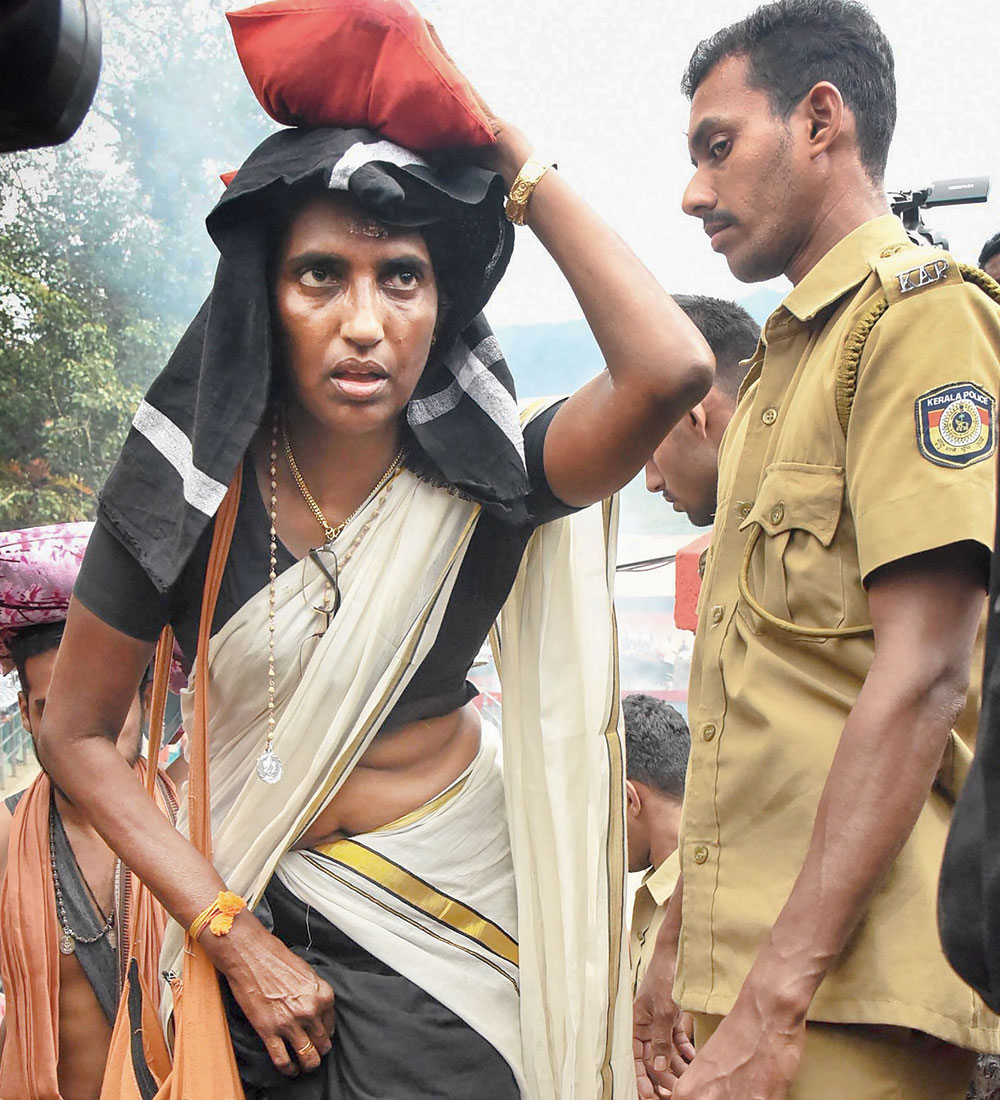 The BJP has urged its leaders and workers to set off for Sabarimala in “maximum” numbers every day to “protect the tradition”, according to an internal memo that flies in the face of the party’s professed stand on the temple agitation.

“As such, maximum number of workers should be sent from each constituency,” says the circular the party’s Kerala unit issued on November 17.

The circular comes at a time the Sangh parivar and some community organisations have been resisting the CPM-led state government’s decision to enforce the Supreme Court’s September 28 verdict that lifted a centuries-old ban on women of childbearing age from entering the shrine.

No woman between 10 and 50 has yet been allowed to enter the temple since September 28.

The BJP has so far officially denied any political agenda in the agitation. But an

early hint of the party’s intent may have come last week when Kerala unit chief P.S. Sreedharan Pillai was caught on video describing the Sabarimala row as a “golden opportunity”.

The comment had come at a meet of the party’s youth wing that was out of bounds for the media.

The circular belies the party’s declared stand. The memo, which covers a period from November 18 to December 15, urges party workers to head to the Kerala hilltop shrine to “protect the tradition”.

It contains dates, names of those in charge in each Assembly constituency and 58 state-level leaders who would lead the workers once they enter the temple premises.

“The in-charges (coordinators) for each constituency have also been decided. All those who are in charge need to communicate the time and place to assemble,” the circular says.

It is specifies that state committee members and district-level functionaries need to participate in the drive while clarifying that the dates and persons in charge in Alappuzha, Idukki and Pathanamthitta, where the temple is located, would be communicated later.

State unit general secretary M.T. Ramesh said he had no idea that such a circular had been issued. “I haven’t received any such document. The BJP does not have such a plan,” he told a Malayalam channel.

While some BJP leaders whose names figured in the circular didn’t respond to calls from The Telegraph, one leader confirmed the existence of the document but asked not to be named.

CPM state secretary Kodiyeri Balakrishnan slammed the circular. “This agitation is to create anarchy in Kerala. The Sangh parivar is using a method similar to Khalistani extremists,” he told a media conference, referring to the militants who had taken over the Golden Temple in the 1980s. “They are trying to take control of Sabarimala, for which they are using even women and children.”

CPM Lok Sabha member from Palakkad M.B. Rajesh said the circular had proved the BJP’s real motive. “This is clear proof about the BJP using Sabarimala as its political agenda. This reminds me of their Ayodhya kar seva.” The Ayodhya agitation had ended in the Babri Masjid being pulled down in 1992.

“They are either assembling en bloc at the temple or infiltrating genuine devotees to create trouble for political gains. It is also clear that all those who created law and order situations at the temple are fake devotees from the Sangh parivar,” Rajesh said.

Sixty-nine Sangh activists were arrested late on Sunday from the Sannidhanam, the last lap before the 18 sacred steps to the temple, after they defied police instructions not to camp in the area.

All of them were sent to judicial remand on Monday.