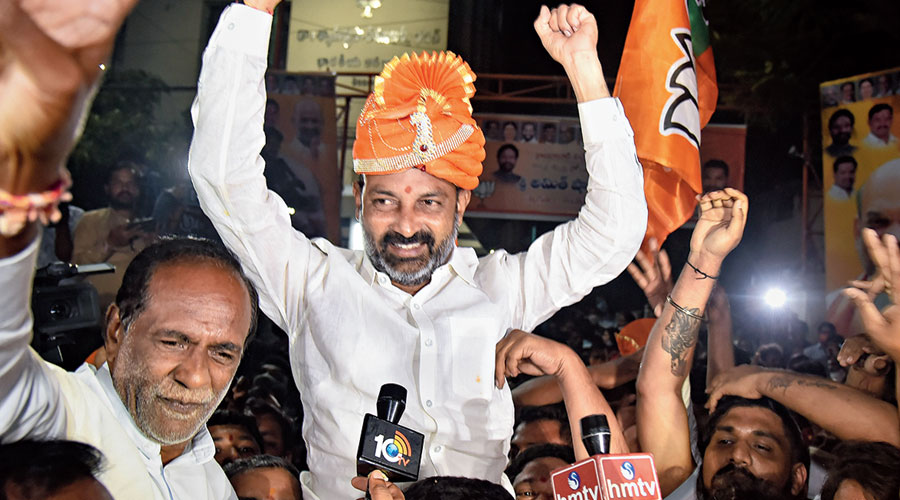 The BJP on Friday made huge gains in the Hyderabad civic polls, rising from minnow to serious competitor on the back of a polarising campaign, but suffered a blow in the Maharashtra legislative council elections where it lost from stronghold Nagpur.

By late evening, with results in 149 of the Greater Hyderabad Municipal Corporation’s 150 seats declared, the ruling Telangana Rashtra Samiti (TRS) had won 55 while the BJP tally was 48, ahead of the 44 picked up by Asasuddin Owaisi’s AIMIM. The Congress had won 2.

In the previous polls in 2016, the TRS had won 99 seats, Owaisi’s party 44 and the BJP just 4, which means the BJP’s gains have come at the ruling party’s expense.

The improved showing is significant for the BJP, for Hyderabad accounts for 24 of Telangana’s 120 Assembly seats — of which the BJP holds just 2 — and 4 Lok Sabha constituencies.

Hyderabad has a large Muslim population, and the BJP had run a high-decibel campaign targeting Owaisi to gain a foothold in a southern state it had little presence in.

Some BJP leaders posted self-congratulatory tweets addressing “Bhagyanagar”. Adityanath had said that if the BJP won, it would rename Hyderabad as “Bhagyanagar” – apparently after the Bhagyalakshmi temple near Char Minar.

However, in Maharashtra, the BJP won just 1 of the 6 legislative council seats that were up for grabs. The ruling Shiv Sena-NCP-Congress combine won 4 while 1 seat went to an Independent.

The real jolt was the BJP losing the Nagpur “graduate constituency”, a stronghold where all its top state leaders had campaigned.

Seven of the council’s members are elected by graduates from the state’s seven divisions, of which one is Nagpur, made up of six districts.

The results are a setback for the BJP’s efforts, led by former chief minister and now leader of the Opposition Devendra Fadnavis, to topple the Uddhav Thackeray government. 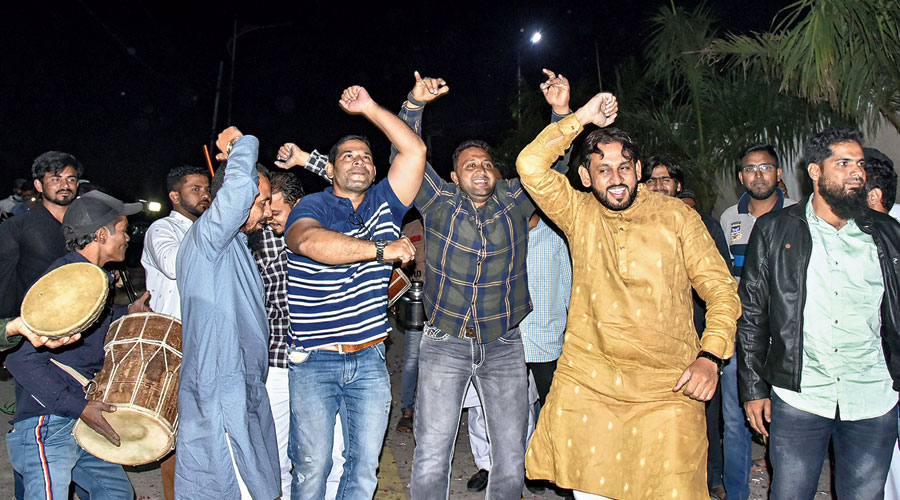 AIMIM supporters celebrate outside the residence of their party president Asaduddin Owaisi after his lead in the Greater Hyderabad Municipal Corporation elections in Hyderabad on Friday.
(PTI)

Nagpur city is the home turf of senior Union minister Nitin Gadkari as well as Fadnavis, apart from being the headquarters of the RSS.

The BJP also lost the Pune graduate constituency while wresting the Dhule local body constituency from the Congress on the back of defection by the previous incumbent.

In public, BJP leaders tried to ignore the Maharashtra results and celebrate the Hyderabad performance.

“Well done Bhagyanagar....!!!!! Great going team @BJP4Telangana. You made a mark,” BJP general secretary (organisation) B.L. Santosh had tweeted in the morning as the initial trends put the BJP on top.