Police filed an FIR against Akash Vijayvargiya and 10 others in connection with the assault, an official said 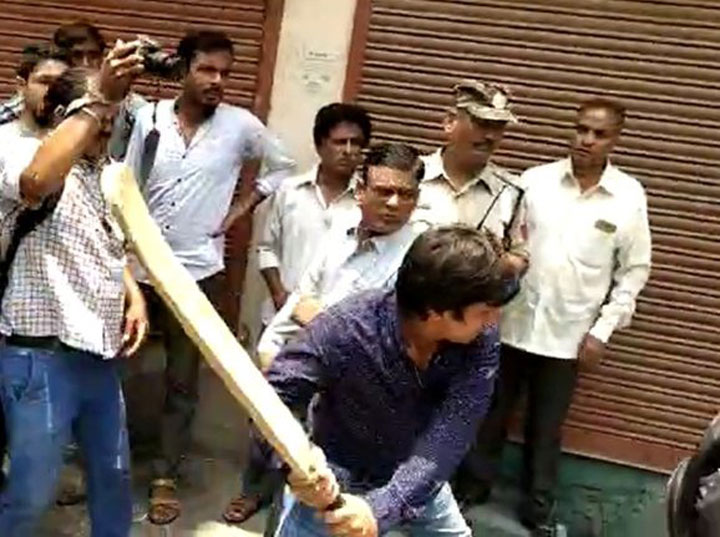 Akash went about beating up the officer even as mediapersons surrounded him with cameras and recorded the entire incident.
(Screengrab)
The Telegraph And PTI   |   Indore   |   Published 26.06.19, 01:23 PM

Madhya Pradesh BJP MLA Akash Vijayvargiya was arrested on Wednesday for attacking a civic body official with a cricket bat, after an altercation over a demolition drive.

A video of the assault went viral on social media.

Police filed an FIR against Akash Vijayvargiya and 10 others in connection with the assault, an official said.

Akash went about beating up the officer even as mediapersons surrounded him with cameras and recorded the entire incident.

#WATCH Madhya Pradesh: Akash Vijayvargiya, BJP MLA and son of senior BJP leader Kailash Vijayvargiya, thrashes a Municipal Corporation officer with a cricket bat, in Indore. The officers were in the area for an anti-encroachment drive. pic.twitter.com/AG4MfP6xu0

Justifying his action, Akash said: 'In the BJP, we have been taught, pehle aavedan, phir nivedan aur phir danadan. (first request and then attack).'

Eye-witnesses said the locals were protesting the razing of a house when Akash, who was a part of the protest, warned the civic body staff of consequences if they did not leave the spot.

Akash Vijayvargiya, BJP MLA on thrashing a Municipal Corporation officer in Indore: This is just the beginning, we will end this corruption & goondaism. 'Aavedan, nivedan aur fir dana dan' this is our line of action. #MadhyaPradesh pic.twitter.com/xYLqJnpWdZ

Akash's supporters removed the keys of the earth moving machine brought in to carry out a demolition.

Amid the altercation, Akash brought out a cricket bat and started hitting an officer who was talking on his mobile phone. The lawmaker's supporters also attacked the officer and abused him while police personnel tried to contain the situation.

Akash said some civic officials were razing houses which were in a good condition.

'This is a conspiracy between owners of the houses and officials. They want to raze the houses so that leaders of the ruling Congress can take possession of the land,' he said.

Some condemned the assault, some asked Madhya Pradesh Congress to take action against the incident, and some made snarky and funny comments.

Here are Twitterati's reactions to the footage released by ANI:

Dear @OfficeOfKNath when do you plan to arrest the violent legislator #AkashVijayvargiya why is he still on the loose?

This Gutkha goon beating up a govt officer with a bat is Akash Vijayvargiya, BJP MLA. His dad GutkhaRaja Kailash Vijayvargiya regularly flies business class to Kolkata to lecture Bengalis on culture. This old man also lectures women abt how to cover body. @JanAdhikar01 https://t.co/3dFSJou9D5

When power comes , real character of a person can be seen then . #AkashVijayvargiya

At a time when the world is obsessed with cricket and the ICC Cricket World Cup, here are some of the tweets addressing the lawmaker's batsmanship.

Proud of this boy #AkashVijayvargiya - well played shot. 👏🏼👏🏼@BCCI should look at him for the next IPL match 🏏
Now anti-encroachment officers will never dare to come here - this is the kind of fear that needs to be instilled 💪💪
.#BhaktBanerjee https://t.co/Z0Lt6HUBOk

New batsman of cricket team on the field to win match ! Putting his 100% ! No stone unturned!!mr Akash Vijayvargiya son of Kailash Vijayvargiya !! pic.twitter.com/KfQDUJ2HIm