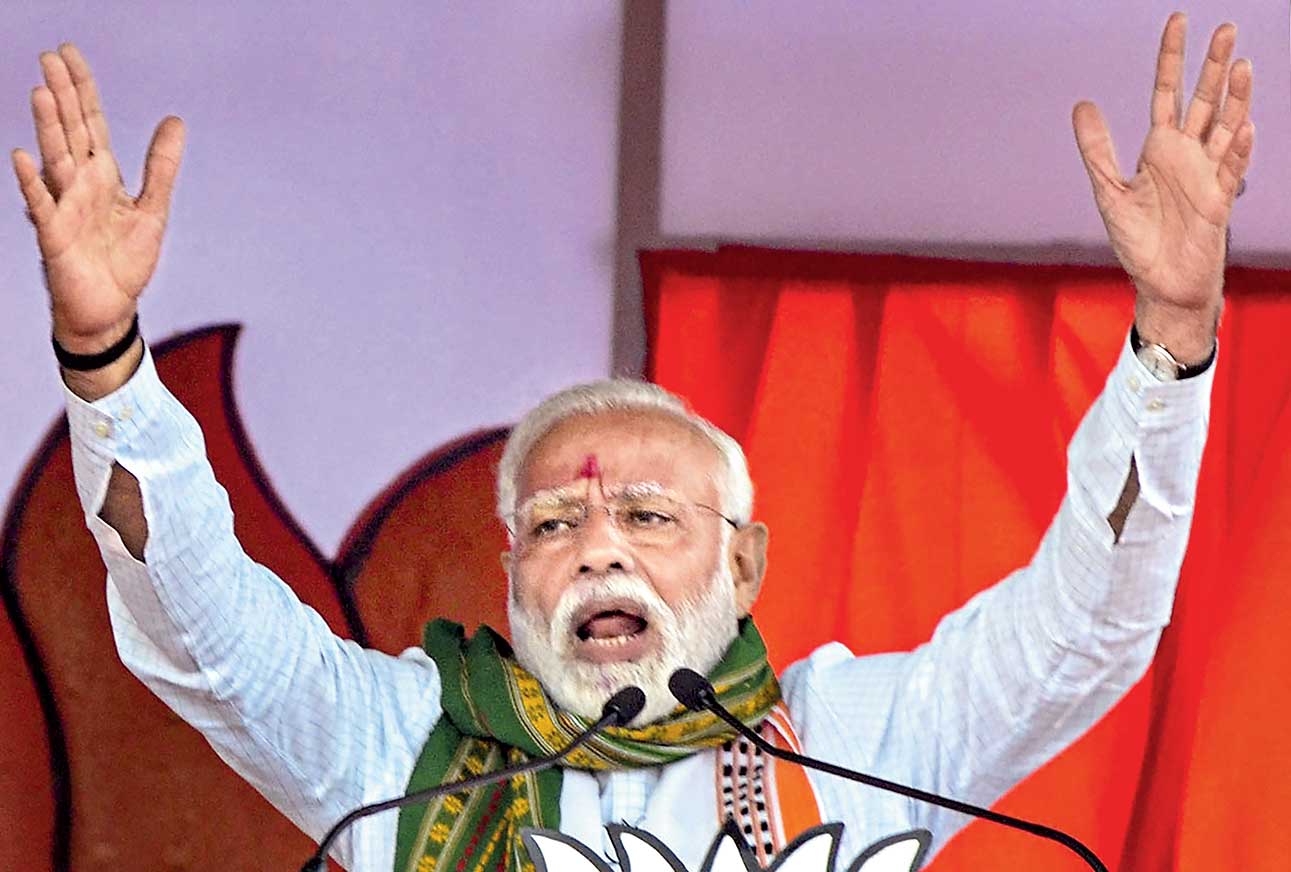 Narendra Modi in Tripura on Sunday. The Prime Minister also addressed a rally in Manipur during the day. A video posted online by the Twitter handle @ManipurTalks showed a crowd of women being pushed back into a ground by police.
(PTI)
Our Special Correspondent   |   New Delhi   |   Published 08.04.19, 02:09 AM

The BJP seems to have again chosen to rely on Prime Minister Narendra Modi’s personal charisma to try and retain power while suffusing its campaign theme with messages about the Balakot air strike.

While the manifesto is to be released on Monday, the campaign material unveiled on Sunday suggests the party believes that the Prime Minister’s image remains its best asset. And that turning the general election into a personality clash suits it better than locking horns with the Congress on policies and programmes.

It goes on to accuse the Congress of a pervasive nepotism, refers to the fast completion of projects under Modi’s rule, and makes vague references to black money and assistance to the poor.

It is silent on the budget promise of a pre-poll direct transfer of Rs 2,000 to poor farmers — part of a Rs 6,000-a-year scheme — probably to avoid comparison with the Congress’s promised annual dole of Rs 72,000 to impoverished households.

The youth are mentioned — not in the context of jobs or education but in connection with “josh” (zeal or passion) and military adventures.

In the video, this is accompanied with screenshots of newspapers reporting the Balakot air strikes.

The video of the song has visuals showing Modi attending international events, washing the feet of Dalit sweepers during the Ardh Kumbh in Allahabad and addressing huge crowds in political rallies.

Finance minister Arun Jaitley, who unveiled the campaign material, claimed the electioneering would focus on the government’s achievements and vision and its decisive leaders.

Jaitley taunted the Opposition for failing to project a leader, saying: “We are looking to form a government with one captain and not a team of 11 members with 40 captains. People now have to choose between a proven, decisive government and a mahamilawat (‘grand adulteration’, a gibe at the Opposition’s claim of a ‘grand alliance’).”

He added: “It's a matter of shame that the Congress manifesto doesn’t even mention anything about our middle class.

The poor, middle class and neo-middle-class will be at the centre of the BJP’s electioneering.” Jaitley accused the Congress of planning to levy more taxes, a charge the Congress has denied.

“We have constantly reduced taxes. The Indian middle class will impact the global economy in the coming decades in the same way the Chinese economy influenced it earlier,” Jaitley said.

He asserted that the full majority that the BJP had won in 2014 had helped the Modi government take big decisions on a range of matters, including national security, corruption and black money.

Jaitley cautioned the country against throwing up a hung Parliament, asking it to decide between “a weak Centre” and “a decisive Prime Minister heading a majority government”.