The pristine bird sanctuary is famous for 136 species of birds, and a sizeable population of rajhans or the bar-headed goose, which is a migratory bird 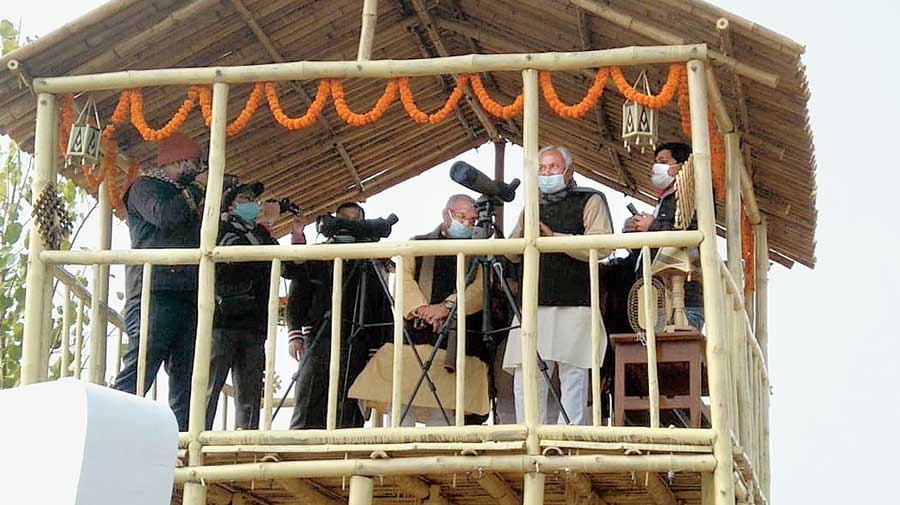 Bihar chief minister Nitish Kumar inaugurated ‘Kalrav’, the first ever bird festival of Bihar at Nagi-Nakti bird sanctuary in Jamui district, around 200km southeast from the state capital on Saturday.

The pristine bird sanctuary is famous for 136 species of birds, and a sizeable population of rajhans or the bar-headed goose, which is a migratory bird. The number of this particular species touches 1,600 at times, which is around 3 per cent of its entire population in the world.

“This is a very beautiful place with regard to the environment and a large number of birds reside at the sanctuary. Many migratory birds come here during winter. Several experts and ornithologists from different parts of the country are also visiting here to guide the people,” Nitish said after inaugurating the festival.

Highlighting the need to protect the birds, the chief minister said that the objective of his visit to the sanctuary was to give a message to the people to do so for the coming generations.

“Such bird festivals should be organised every year to inspire and encourage the people. Experts tell that many of the migratory birds fly 13 days to arrive at such sanctuaries during winter, and keep returning every year if they like the place,” Nitish added.

Bird ringing was also done on the occasion. It helps individual identification and tracking of their movements.

Nagi-Nakti are twin dams separated by six kilometres, and spread across 1123 hectares surrounded by hills and forests. The Nagi dam is well known for the presence of ‘tor’ or freestanding rock outcrop, making it more beautiful. Such rock outcrops are rare in the eastern India, and is the only one in Bihar.

“Bihar has several bird areas and is among the riches in the country when its comes to the number of bird species. This three-day bird festival is the first one in the state. It will keep revolving and will be organised in different bird areas every year,” environment and forest department principal secretary Dipak Kumar Singh told The Telegraph.

Dipak said that tourist cottages, bird interpretation centre, and information about heritage sites in the area have also been made available for the visitors.