A chosen bunny in the making

The hare and the hound are running together; it doesn’t test imagination to tell how the tandems usually end 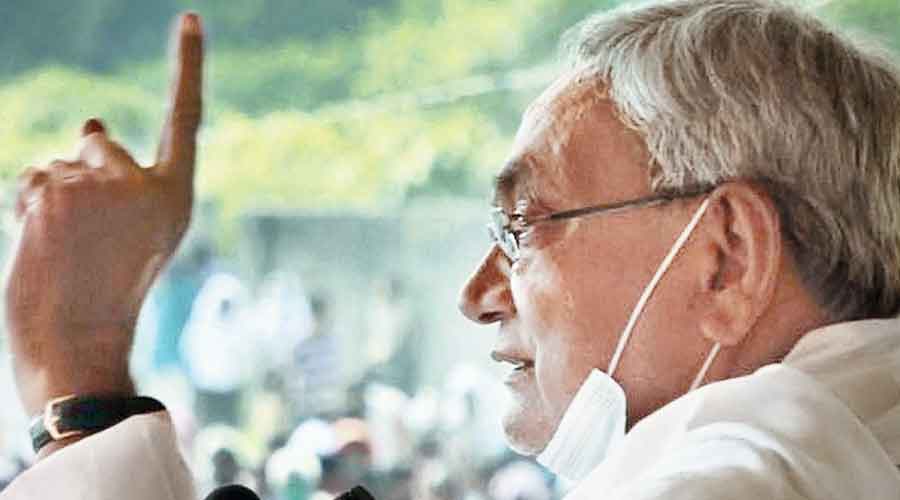 Chief minister Nitish Kumar has become the hare of the Bihar campaign, the BJP its hound. The two are running together; it doesn’t test imagination to tell how hare and hound tandems usually end.

Bihar has turned into a teeming melee, thick with the kicked-up dust of battle that defies clear deciphering, just as it also defies cognition of a rampant and killer pandemic.

But the verdict on Nitish Kumar already lies inscribed in bold letters on the unintelligible skirmishing for Bihar’s honours: he is headed to drastic diminishment. Should Nitish manage to secure — as Union home minister Amit Shah has publicly promised — a record fourth term as chief minister, it will be as chosen bunny of the BJP.

The one clear message ringing out from Bihar is that Nitish’s public image has nosedived — “sushasan babu” has become a thing of ridicule. He has been mocked and taunted during election outings, angrily motioned to go back where he came from, called, among other things, a “chor”.

Nitish is visibly riled; footage from the campaign trail is peppered with a chief minister in episodic outbursts of public anger. He is staring at the price he might have to pay for taking his eye off the governance ball to play survival games.

It can be of little comfort to Nitish that many of those chanting “Nitish hatao” are also chanting “BJP lao”; not all the anti-Nitish sentiment translates into anti-NDA sentiment. The BJP, on the contrary, cannot be unhappy to sip the juicy paradox that this is —  it has been spared palpable public annoyance, the blame is all for Nitish to hog.

As one state BJP leader said, no words minced, “If Nitish has been taking all the credit as ‘sushasan babu’, he must now also take all the blame for what has gone wrong.”

Could it be a mere accident that Nitish, the anointed face of the NDA in Bihar, finds no mention on the BJP’s campaign menu for another “NDA sarkar”? He is not in the promotional clips, he is not on the posters, he was nowhere around when the BJP released its manifesto. For the BJP, it is all Narendra Modi and him alone.

The BJP is clearly relying on another spell of the Modi talisman over Bihar and employing its war chest and wares to upscale its performance to the exclusion of Nitish. It often even appears a strategy —  a risk-ridden one — working at Nitish’s expense.

Here is where the hounding of the hare comes. For all the chortled protestations over the rebellion of Chirag Paswan of the LJP, the fact remains he is still an NDA ally. He is contesting all non-BJP seats on a strident anti-Nitish platform and could cause maverick damage. There is nothing to suggest that if required, Chirag will not become intrinsic to the BJP’s game plan post-election.

There is also the other “grand alliance” the BJP has nudged to formation, the coming together of marginal players like Upendra Kushwaha’s RLSP and Mayawati’s BSP, now joined by Asaduddin Owaisi’s AIMIM, which enjoys some heft in Bihar’s Seemanchal region. This is the region the BJP has largely left for Nitish to contest.

Hares usually scamper alone, hounds hunt in packs; the BJP has ensured Nitish has more biting to fight off than just from the churning challenge of Tejashwi. Where they gnash and how deep they cut remains an imponderable, but it is a risk the BJP appears ready to run in order to secure a dictating hand over Nitish.

That said, it remains a risk whose logarithm isn’t easy to calculate. Electoral spins can often spin out of control; voter equations are algebraic, seldom arithmetical. Two and two do make four but in adding them you may lose sight of what might be adding up to six elsewhere in reaction.

As the BJP manifesto revealed on Thursday, the party senses the threat Tejashwi has overnight conjured out of widespread voter concern over unemployment, especially among the youth. Its redoubled promises over providing jobs are a knee-jerk response to the sentiment Tejashwi has triggered.

It’s early in the campaign yet; it hasn’t been fired by its dominant themes. Tejashwi has lit a flame, a novel enunciation of distress and redress at a remove from beaten themes of caste and creed. His chief opponent, Prime Minister Modi, intends his first outing on Friday and what he says will probably provide a better sense of where this could head.

Nitish, meantime, must mull the best utilities of a rubbed-out reputation.