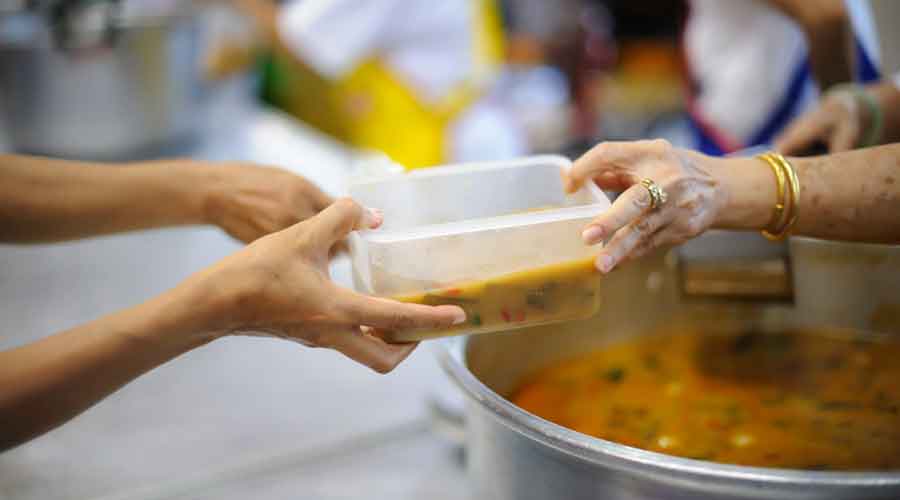 Under the Annapurna scheme, cooked food is provided at Re 1 to the poor and the hungry at railway stations, bus stands, temples and market places
Shutterstock
Subhashish Mohanty   |   Bhubaneswar   |   Published 14.01.21, 12:44 AM

The Bhubaneswar Municipal Corporation on Wednesday banned distribution of free food and clothes to the homeless people living on the roadside under its jurisdiction and urged all those who wanted to engage in charity to do so using the BMC platform.

The step seems to have been taken to checkmate Bhubaneswar’s BJP MP Aparajita Sarangi’s Annapurna scheme under which food is being distributed to the poor for just Re 1.

BMC commissioner Prem Chandra Chaudhary said: “No one is allowed to distribute free food and clothes to the poor and the homeless on the roadside. We request individuals and organisations to distribute free articles and food to the destitute at the shelter houses managed by the corporation. They can seek the BMC’s permission to do this.”

The corporation also cautioned that those who violate the law will have to face legal consequences. The corporation, however, asserted that it wanted the city to be free of beggars. “If food and clothes are distributed on the roadside, the destitute will hesitate to go to shelter homes. It will thwart our purpose of making the city free of beggars,” said a senior BMC official.

Sarangi launched her Annapurna scheme on January 7 and has been providing free food to the poor at a subsidised rate of Re 1. Ahead of the urban elections, the move is being seen as a clever strategy to influence the poor who are going to play a major role in the polls. It also poses a serious threat to the Odisha government’s Aahar scheme, under which meals are provided to the poor at Rs 5.

Sarangi has maintained that she will go ahead with her Annapurna scheme. “Annapurna Yojana is not a free scheme. We will continue with the scheme,” she said.

Under the Annapurna scheme, cooked food is provided at Re 1 to the poor and the hungry at railway stations, bus stands, temples and market places. The expenditure is borne by various organisations.

This is not the first time that Sarangi, a former BMC commissioner herself, has clashed with the urban body.

Last October, the BMC had locked her office here citing violation of Covid-19 guidelines. After Sarangi challenged the order and produced proof of Covid guidelines being violated in the ruling BJD’s office and started doing her office work on the roadside, the corporation had unlocked her office immediately.