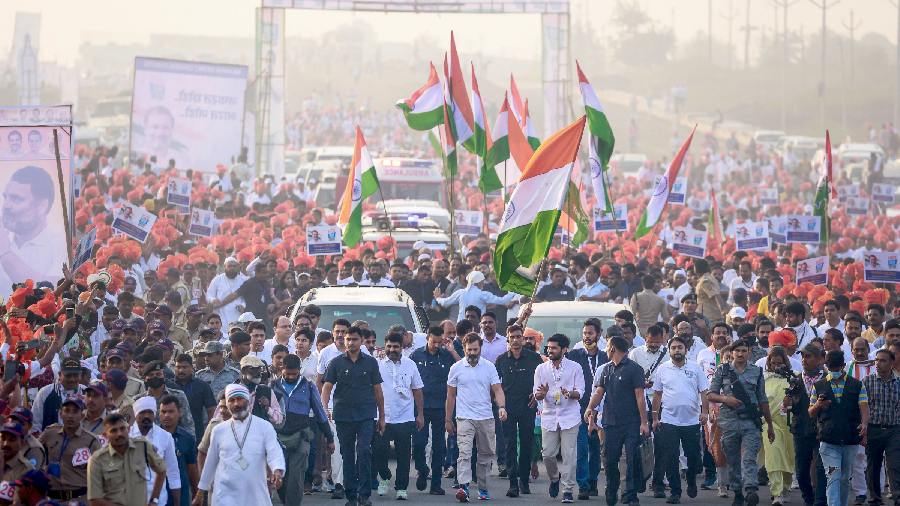 The Bharat Jodo Yatra led by Congress leader Rahul Gandhi continued on the 10th day of its Maharashtra leg on Wednesday in Washim district.

The foot march, which began at 6 am from Jambhrun Phata, will proceed to Medshi village in the evening and will take a night halt at Patur in Akola district.

The yatra started on September 7 from Kanniyakumari in Tamil Nadu and entered its 70th day on Wednesday.

Gandhi on Tuesday claimed the Bharatiya Janata Party (BJP) keeps attacking the Constitution everyday as it does not want to accept that Dalits, tribals and the poor should get rights.

He had also targeted Prime Minister Narendra Modi over the implementation of Goods and Service Tax (GST) and the 2016 note-ban exercise and dubbed them as "two weapons to kill" small and medium businessmen, shopkeepers and farmers.

Gandhi had also hit out at Hindutva ideologue V D Savarkar and alleged he was "working" for the British and took pension from them.

The Bharat Jodo Yatra, a mass contact initiative of the Congress, entered Maharashtra on November 7 from Telangana. It has so far covered Nanded, Hingoli and Washim districts in the western state.

The foot march will further cover Akola and Buldhana districts in Maharashtra before proceeding to Madhya Pradesh on November 20.

The NCP and Shiv Sena leaders, allies of the Congress in the Maha Vikas Aghadi (MVA), have participated in the yatra in Maharashtra.