Advertisement
Home / India / Before China, Modi not so brave: Rahul

Modi went to China, bowed and said 'Keep Doklam, no one in India will know', the Congress chief said 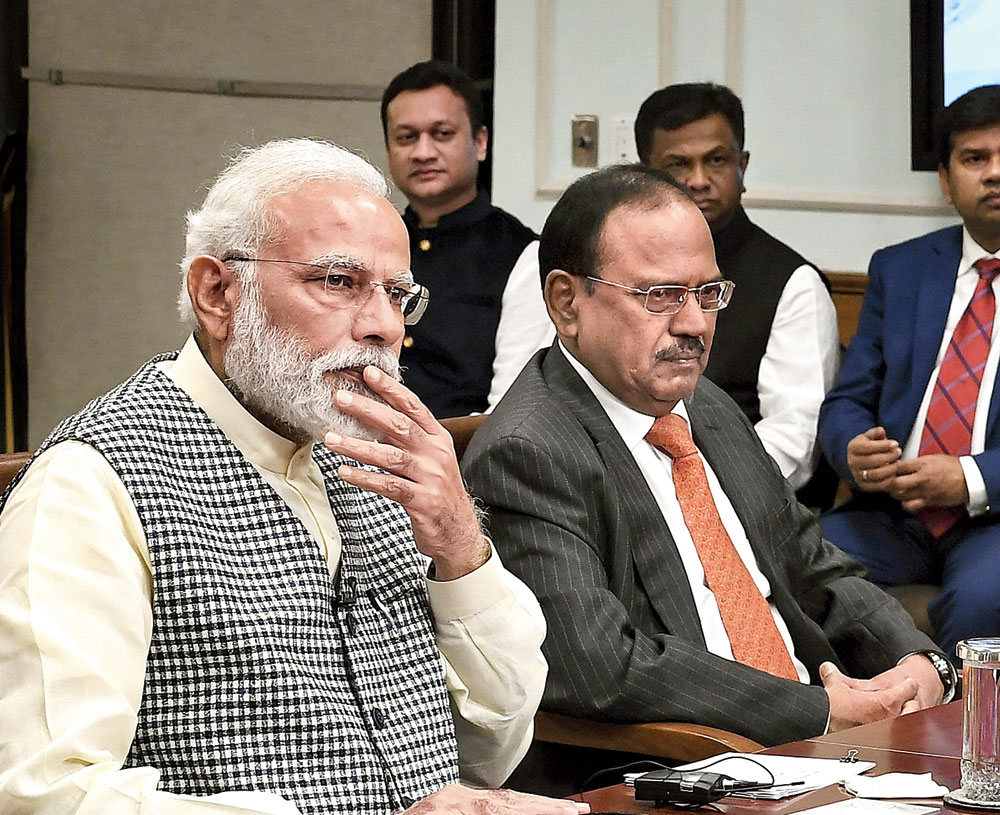 Narendra Modi and national security adviser Ajit Doval at an event in New Delhi on Monday. Congress leader Rahul Gandhi pointed out on Monday that Doval had escorted Masood Azhar in 1999 to Kandahar where the terrorist was freed.
(PTI)
Sanjay K. Jha   |   New Delhi   |   Published 11.03.19, 09:55 PM

Rahul Gandhi on Monday put Narendra Modi’s “ghar mein ghus ke maarenge” bluster to a reality test, contending that the 56-inch chest had meekly surrendered before China because he is essentially a “coward”.

The Congress president appears to have decided to counter Modi’s muscle-flexing over the airstrikes in Pakistan with a two-pronged approach: expose the BJP’s poor track record on terrorism and juxtapose the Prime Minister’s post-Pulwama swagger with his own past conduct.

Rahul cleverly used the China example rather than one from Pakistan, which evokes majoritarian passions.

Modi, who has repeatedly bragged since the airstrikes that it was his nature to go into the enemy’s home and beat them, will find it difficult to argue that his courage should not be judged in the context of China.

Rahul rubbed the message in: “Modi then went to China on a no-agenda meeting. Modi folded his hands, bowed to him (Chinese President) and said, ‘Keep Doklam. I won’t tell anybody in India….”

He then linked Modi’s conduct to the RSS ideology and underlined that the leader who wrote letters begging the British for mercy was “Veer” (Brave) Savarkar for them.

Rahul brought up the attack in Pulwama in which 40 CRPF troopers were killed. Pakistan and the Jaish-e-Mohammed were behind the attack, he said, but asked who had released Jaish founder Masood Azhar from an Indian jail.

Modi’s national security adviser Ajit Doval had escorted the terrorist to Kandahar in December 1999 where he was freed, he pointed out.

The Congress does not bow before terror, Rahul asserted, pointing out that two Prime Ministers from the party had been assassinated. “The country knows this truth,” he said.


I too have fought Modi, I know him. If you stand up to him, he will run away.
- Congress president Rahul Gandhi


Rahul to Modi: Who released Masood?