Eventually, the PM had to cancel a rally, turn back and leave Punjab — his first visit to the election-bound state after the repeal of the farm laws ending in ignominy 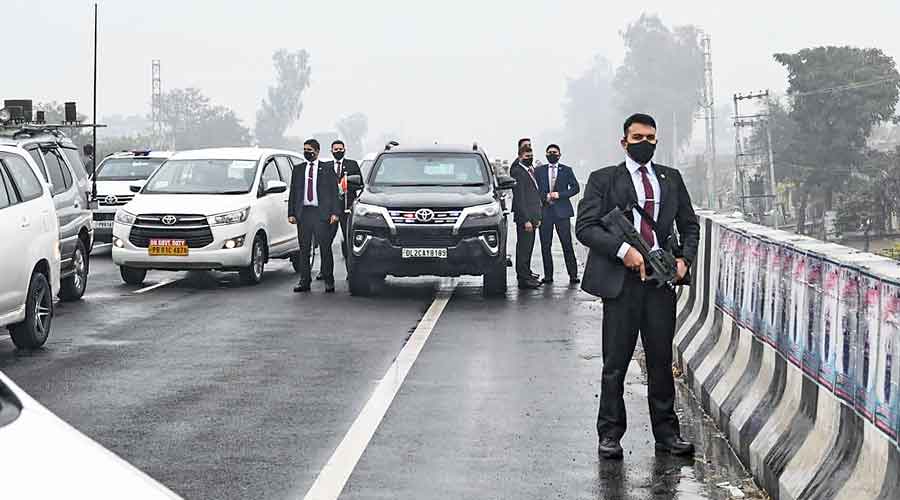 The biting sarcasm showed how much it was hurting — and it was more illuminating than any of the official versions flowing from the seat of power.

“Apne CM ko thanks kehna, ki main Bathinda airport tak zinda laut paaya (Convey my thanks to your CM, for I could return to Bathinda  airport alive),”  the ANI new agency quoted Prime Minister Narendra Modi as telling Punjab officials at the Bathinda airport before returning to  New Delhi.

The statement — not disowned till Wednesday night, the catchphrase catching the fancy of at least one minister — was vintage Modi, rippling with the hyperbole associated with the campaigner-in-chief. But it was hardly business as usual.

The mighty Modi was standing down and abandoning the post — something unheard of in the battle lore built around the Prime Minister.

On a day of extraordinary events, Modi and his cavalcade were stuck on a flyover in Punjab’s Ferozepur for “15 to 20 minutes” after they ran into a protest by farmers. Eventually, Modi had to cancel a rally, turn back and leave Punjab — his first visit to the election-bound state after the repeal of the farm laws ending in ignominy.
Suggestions have been made that Modi called off the visit also because of a fear of low turnout at the rally.

The visible reason was the protest by the farmers who have already been infuriated by a question attributed to Modi — “Did they die for me?” — when Satya Pal Malik, now Meghalaya governor, raised with the Prime Minister the deaths of hundreds of farmers during the movement against the contentious farm laws. Malik had claimed he found Modi’s attitude “arrogant”.

On Wednesday, the Kisan Ekta Morcha, the official handle of the farmers’ movement, tweeted under the hashtag “GoBackModi”:  “Let’s make it very clear. This is because of huge protest by farmers and people of Punjab that Modi had to cancel his event. There were very few people in the rally ground. Most of them were forced to attend. The rally is cancelled due to negative response by Punjabis.”

The farmers were  protesting  the inaction of the government on many assurances given to them last month, following which their year-long agitation had been called off.
The BJP, as being feared by a section of farmers, described the events as a “major security lapse”, and the Union home ministry asked the Congress-run Punjab government to file an immediate report, saying it did not ensure the required deployment.

Union home minister Amit Shah said such dereliction of the security procedure was unacceptable and accountability would be fixed. Shah termed it a “Congress-made happening” and sought an apology from the principal opponent.  Ministers and chief ministers of BJP-ruled states joined in the political offensive.

BJP national chief J.P. Nadda accused Congress leader and Punjab chief minister Charanjit Singh Channi of refusing to get on the phone to address the “major lapse in the security of the Prime Minister”.

A statement from the Union home ministry was the first to flag the “security breach” and blame it fully on the Punjab government. Before this, news flashes had said Modi’s rally in Ferozpur has been cancelled because of rain and inclement weather.

“Around 30km from the National Martyrs Memorial in Hussainiwala, when the PM’s convoy reached a flyover, it was found the road was blocked by some protesters,” the home ministry statement said.

“The PM was stuck on the flyover for 15-20 minutes. This was a major lapse in the security of PM,” the statement said, adding that “after this security lapse, it was decided to head back to Bathinda airport”. From Bathinda, Modi flew back to Delhi in the evening.

This was Modi’s first visit to poll bound Punjab after he was forced to repeal the farm laws. He was scheduled to launch a bunch of development projects and address the  rally to kick-start his party’s poll campaign in the state where the AAP is being considered the principal challenger to the Congress.

Modi was scheduled to land at Bathinda and then use a helicopter to reach the National Martyrs Memorial. Rain and poor visibility  forced a last-minute change, and Modi decided to drive down from Bathinda after “necessary confirmation of necessary security arrangements by the DGP Punjab police”, according to the ministry statement.

The statement claimed that Modi’s schedule and travel plan was communicated well in advance to the state government. According to rules, it was the state’s responsibility to make necessary arrangements for “logistics, security as well as keep a contingency plan ready”,  it added.

Shah, who was initially silent as his ministry statement had done the needful, later launched a scathing attack on the Congress.

Shah tweeted: “Today’s Congress-made happening in Punjab is a trailer of how this party thinks and functions.”

“Repeated rejections by the people have taken them to the path of insanity. The topmost echelons of the Congress owe an apology to the people of India for what they have done,” the tweet added.

The BJP has very little influence in the border state, dependent for the past two decades on the erstwhile ally Akali Dal, which snapped ties over the farm laws. The BJP has now tied up with former chief minister and Congress rebel Amarinder Singh’s newly launched party and a breakaway faction of the Akali Dal.

The BJP was hoping Modi’s rally, in the backdrop of the “goodwill” due to repeal of the farm laws, would give a leg-up to the party in the state where the Arvind Kejriwal-led Aam Aadmi Party seems to have emerged the principal challenger to the ruling Congress.

The BJP is now seeking to use the “serious security lapse” to draw political capital. “When the PM had his security breached, Congress leaders erupted with joy, asking him how his josh was!” women and child development minister Smriti Irani said.

“PM Modi, magnanimous as ever, on his way back, communicated, ‘Zinda laut raha hoon’,” she added.