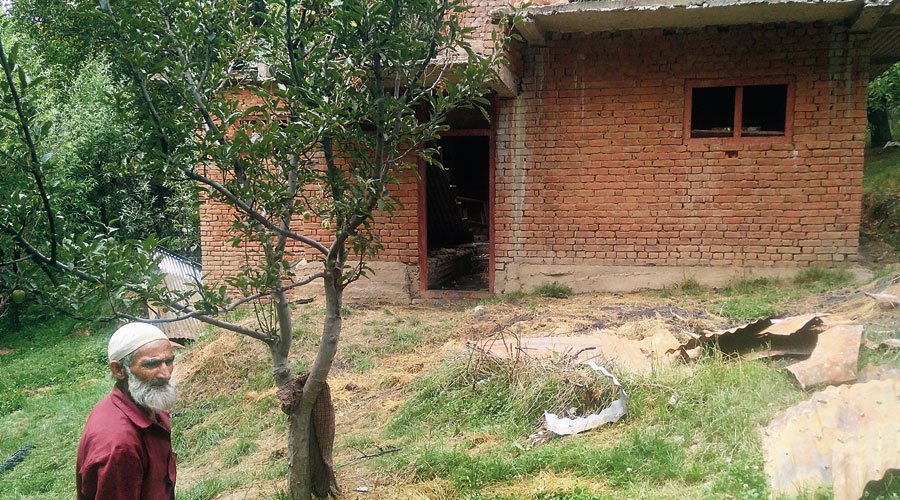 A villager stands in front of the barn in Shopian where the alleged gunfight took place
Telegraph picture
Muzaffar Raina   |   Jamnagri   |   Published 14.08.20, 02:50 AM

A largely intact barn stands in a secluded spot surrounded by an ocean of apple orchards in this village, asking silent questions about the army’s claim of a “gunfight” at the site in which it killed three young men last month.

The army says the trio were unidentified militants who had fired at its soldiers from inside the barn. But a few families in Rajouri, Jammu division, say the slain youths were three missing cousins who had travelled to Kashmir to work as labourers but were killed in a staged encounter.

A police team led by a deputy superintendent left for Rajouri on Thursday to collect DNA samples from members of these families so they can be matched with the samples taken from the slain youths.

Mohammad Yosef, the distraught father of the “missing” Ibrar Ahmad, 25, said he and his son were the only males in the family who lacked an army background. He wondered how the army could kill a man from a family full of serving and retired soldiers.

“Seven people from my family are soldiers or former soldiers. My brother, Hawaldar Bashir Ahmad, is a Kargil war veteran. Another of my brothers is a retired honorary captain. Five other relatives are in the army,” Yosef told The Telegraph over the phone. “I challenge the army to prove they (the slain youths) were militants. I have faith in the government and hope the guilty will be punished.”

Yosef said his son, father of a two-year-old boy, used to work as a labourer in Kuwait but could not go back to the Gulf because of the pandemic.

The alleged gunfight took place in the early hours of July 18 at the barn, built recently by Jamnagri resident Mohammad Yousuf Bhat to store his apples.

Two days earlier, two men from Rajouri — Ibrar Ahmad, 17, and his brother-in-law and namesake, 25 — had left for Chowgam in Shopian to work as labourers. One of their relatives, Imtiyaz, 22, was already working as an apple-orchard labourer in Chowgam, 8km from Jamnagri, and they meant to join him.

The families last spoke with them on July 17 evening. By the next day, the phones had stopped ringing.

Questions over the army’s version had surfaced soon after the “encounter” but no one came forward to claim the bodies for three weeks. The families of the “missing” men from Rajouri, living across the Pir Panjal mountains around 130km away, were continuing their search.

It was on August 10 that the families stumbled upon social media pictures of the three “dead militants” and confirmed they were their missing children.

The barn bears hardly any signs of a gunfight. It’s not only almost intact but has only a handful of bullet marks. In most encounters — routine in the Valley — the houses where militants take shelter are riddled with bullets before being blown apart by shells and explosives.

Local people said the roof of the barn had been stacked with hay and caught fire. They said they saw soldiers removing tin sheets from the roof in the morning.

The barn stands deep inside the orchards, with the closest habitation being Seer Mohalla, home to 25 Gujjar families some 200 metres away.

Mohammad Ashraf, an orchardist and a member of one of these families, said he had heard gunshots at 2.30am on July 18.

“For the next few hours, there was no firing. Around 6 in the morning, more firing followed. Around 7am, the army knocked on our doors and asked us to accompany them and confirm whether the slain youths were local militants,” Ashraf said.

“We saw three bodies lying on the ground. We told them that we didn’t know them. We had suspicions (about the army account) as they (the dead youths) were wearing ordinary clothes and looked like labourers.”

Ashraf said he was surprised not to find any cordon around the village. During all encounters, the security forces seal the area off to prevent the militants escaping.

“None of us had seen any soldiers in our village while the gunfire was going on,” Ashraf said.

Police sources said they had misgivings about the encounter and arrived at the site in the morning to find the media already assembled several hundred metres from the spot. Normally, the army, police and the paramilitary forces carry out anti-militant operations together.

A police handout on July 18 said the operation had been carried out by 62 Rashtriya Rifles, with the police and the CRPF joining later.

Farida Banu, a landlady in Chowgam, confirmed that the three “missing” men had rented an accommodation from her on July 17 afternoon for Rs 1,600 a month.

Farida said the three had bought the essentials to run the kitchen. She said she did not find them at their lodgings the next morning.

“The door was closed from the inside but nobody answered our knocks. We peeped through the window, which was open, and found nobody inside,” she said.

He said they were also checking the call details of the three “missing” youths, from the phone numbers provided by the families, to ascertain whether they were in touch with militants.