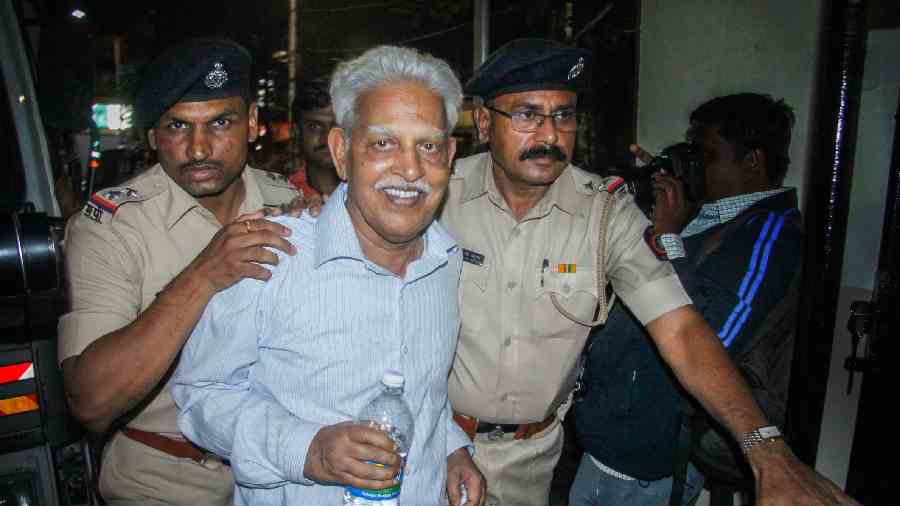 Telugu litterateur P. Varavara Rao’s family on Wednesday welcomed the Supreme Court’s judgment granting him regular bail on the grounds of advanced age and multiple ailments, hoping this could eventually lead to him being in the care of his family in Hyderabad and possible acquittal.

The Elgaar Parishad-Maoist links case accused’s nephew, author N. Venugopal, told The Telegraph: “It (today’s judgment) ended the immense anxiety and uncertainty we have been experiencing for the last 18 months. But it is only the first step towards allowing him to be in Hyderabad and the ultimate trial and acquittal in the case.”

The apex court has ordered Rao to remain in Mumbai, and said the regular bail granted to him instead of the interim bail he had been getting on medical grounds was not a reflection on the merits of the case.

Rao, arrested in August 2018 from his home in Hyderabad, has been living in Mumbai since he was granted temporary medical bail by Bombay High Court for the first time in February 2021.

“Earlier he was living in suburban Bandra. Since March 2022, he has shifted to a rented place in suburban Goregaon. His family members, who are in Hyderabad, keep visiting him,” one of his lawyers, Satyanarayan Iyer, told the news agency PTI after the Supreme Court verdict on Wednesday.

Venugopal said another petition was pending before the Supreme Court for modification and relaxation of the bail conditions so that Rao could be in Hyderabad.

“However, that petition has not yet been listed. Today, Anand Grover (representing Rao) mentioned that petition also and Justice Lalit said: ‘Let it be listed and then we can take it up.’ We do not know when that will be listed,” Venugopal said.

Justice U.U. Lalit was part of the three-judge bench that granted regular bail to Rao and was the judge who read out the order. The court took note of Rao’s advanced age, his health that had not improved and ailments that could get “aggravated” in jail, and the fact that even charges had not been framed.

The court rejected the NIA’s argument that age cannot be a ground for relief “if the crime is heinous” and that Rao was not seriously unwell.

Sixteen intellectuals, academics, lawyers and activists have been arrested in an investigation into alleged Maoist links to an Ambedkarite event called the Elgaar Parishad on December 31, 2017, which was followed by caste clashes the next day at Koregaon village on the banks of the Bhima river near Pune that claimed one life. The eldest of the accused, Jesuit priest and tribal rights activist Stan Swamy, 84, died of post-Covid complications in judicial custody last year. Rao and jurist Sudha Bharadwaj are out on bail.

Rao’s lawyer Grover asked during the hearing in the Supreme Court whether the prosecution wanted Rao to meet Fr Stan’s end.

Rao suffers from umbilical hernia, Parkinson’s disease, dementia and several other ailments. While in Navi Mumbai’s Taloja Central Prison in 2020, his lawyers had cited that his urinary catheter had not been changed for three months when even the best catheters need to be changed once a month. This was suspected to be the cause of a urinary tract infection.

Bombay High Court had allowed him to be moved to a private hospital after two years in jail, observing that he was “almost on his deathbed”.

Venugopal, also the editor of the Telugu monthly Veekshanam, told this newspaper on Wednesday: “It (the book of poems) is under process, may take a few months to come out.”

In 2010, Penguin had published Captive Imagination, an English translation of Rao’s letters from solitary confinement in Secunderabad prison between 1985 and 1989. The 62 poems for the upcoming book include some from his collections of poetry from 1979 to 1985, Bhavishyatthu Chitrapatam  (Portrait of the Future).

The poems about repression and his time in police custody was published by Samudram Mudranalu in 1986 and was banned by the government of undivided Andhra Pradesh from 1987 to 1990 while Rao was in jail in connection with two Naxalite cases. The first case was withdrawn and he was acquitted in the second.