At odds on impact of odd-even on pollution 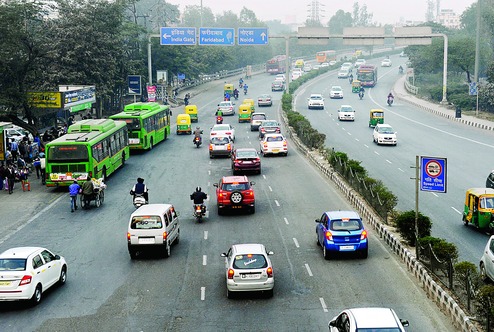 New Delhi, May 10: Curbs on road traffic imposed by the Delhi government last year through the so-called "odd-even" formula virtually failed to reduce air pollution over the capital, scientists said in a report that contradicts speculation that the move had cleaned the city air.

The first peer-reviewed research report to quantify the effect of the traffic curbs in Delhi between January 1 and 15, last year, has documented such small decreases in a key air pollution measure that the scientists say the experiment may be labelled a failure.

The study by researchers at the Indian Institute of Technology, Kanpur, and other academic institutions has found that levels of 2.5-micron-sized particulatematter (PM2.5) fell by only 2 to 3 per cent at most sites sampled across the National Capital Region. The PM2.5 levels dropped by 8 to 10 per cent in only three pockets of Delhi.

"Odd-even was a failure - there is no doubt about that," said Sachchida Nand Tripathi, professor and coordinator of the Centre for Environmental Science and Engineering at IIT Kanpur. "We did not find any significant reductions in the air pollution based on the PM2.5 levels."

The study's findings were published earlier this week in the research journal, Environmental Science and Policy.

But an environmental researcher who was not associated with the new study said the observed reductions should be viewed as encouraging and not dismissed as a failure. "The scale of the air pollution problem is so huge that even this 8 to 10 per cent reduction is very important," said Anumita Roychowdhury, executive director at the Centre for Science and Environment (CSE) in New Delhi, a non-government agency that has been advocating traffic curbs among other measures to improve air quality.

"I think their findings actually contradict their assertions," Roychowdhury said. "Even an 8 per cent drop would mean that this single step of keeping some cars off roads helped arrest any further rise in PM2.5 levels that were already at dangerous levels - this, plus the small reduction, is itself significant."

But the scientists who conducted the study say their analysis underscores the need to back policy with good science. "Before governments intervene, they need to be much better informed about the science - we need, for instance, a much better understanding of the myriad sources of PM2.5," Tripathi said.

Tripathy and his colleagues from the Indian Institute of Tropical Meteorology, Pune, and the National Physical Laboratory and The Energy Resources Institute, New Delhi, divided the National Capital Region into 9km by 9km grids and tracked PM2.5 levels using satellite before during and after the 15-day odd-even experiment.

The Delhi government had imposed the odd-even traffic curbs amid concerns that PM2.5 levels had climbed to levels between 400 and 500. CSE had last year based on air pollution monitoring stations across the capital had said the experiment had reduced peak levels of PM2.5.

Besides traffic emissions, construction activity, crop residue burning and diesel generator sets are among other sources of particulate matter. The scientists say their findings highlight the need for a long-term "inter-sectoral" action plan to deal with the problem of air pollution.