Jagdeep Dhankhar asked JU VC Suranjan Das over the phone to call police to the campus as this is “2019, not 2014” 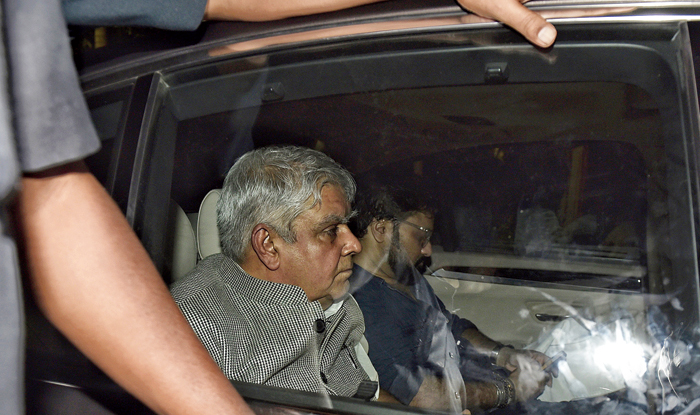 Chancellor and governor Jagdeep Dhankhar asked Jadavpur University vice-chancellor Suranjan Das over the phone to call police to the campus as this is “2019, not 2014” while the academic was being wheeled into hospital on Thursday evening, three sources told The Telegraph on Friday.

This newspaper tried to obtain a response from Raj Bhavan but could not do so because of the late hour at which the multiple sources corroborated the information.

The sources said the governor was talking at the top of his voice over the phone and appeared upset that Das was adamant about not calling the police to the campus to rescue Union minister and BJP MP Babul Supriyo, who was barricaded by students.

The disclosure came on a day chancellor Dhankhar issued a fresh statement in which he referred to “the issue of serious lapses by the university VC, including virtual abandonment of his obligations… in attending to the situation appropriately and inadequate security arrangements for the Governor/Chancellor during his visit….”

The chancellor’s statement ended on an ominous note, saying the alleged lapses “are receiving his attention for way forward steps”.

The statement did not mention it but sources in academia claimed the chancellor had the power to remove a VC on certain grounds, including incompetence and partisan behaviour.

During the phone conversation on Thursday, the references to 2019 and 2014 came as the VC drew the chancellor’s attention to the fallout when the police were called to the JU campus in September 2014 during a students’ siege over a sexual harassment case. The then VC, Abhijit Chakrabarti, was eventually forced to resign.

“The governor then said something like, 'This is not 2014, this is 2019. You should call the police to the campus. The Union minister is stuck',' said a source who did not want to be named because of the nature of the information. Two other sources corroborated the information.

It's not clear what the governor meant by the reference to the change between 2014 and 2019. One perceptible change has been the spectacular rise of the BJP in Bengal.

Told this is not 2014, sources quoted Das as pleading with the chancellor: 'Sir, I'm unable to call the police to the campus. I'm trying to resolve the situation and teachers have been talking to the students so that they can be persuaded to withdraw the blockade. I would quit, but I won't call the police.'

One source said the chancellor replied: 'That (resignation) is up to you.'

On Friday evening, in a formal statement, JU contradicted the chancellor's views on using the police to deal with a campus situation, described the 'incident' that occurred when Supriyo visited the campus as 'extremely unfortunate', condemned the provocations and said it was regrettable that the governor's vehicle was obstructed.

'Equally unfortunate was the incident of vandalism,' the statement signed by JU registrar Snehamanju Basu said.

The statement added: 'The university… believes that the campus cannot be administered with the help of police which provokes adverse implications. It was due to the pursuance of university teachers and employees, not the intervention of police, that led to the withdrawal of the blockade in front of excellence's car in the spot.'

Amid questions why the VC had left the campus before the minister had been rescued, Basu's statement said: 'Unfortunately, both vice-chancellor professor Suranjan Das and pro-vice-chancellor Pradip Kumar Ghosh, both of whom tried to assuage and pacify both sides, fell ill and had to be rushed to a hospital. We wish both a speedy recovery.'

The Jadavpur University Teachers' Association (Juta) said several aspects of the minister's behaviour 'were very provocative', expressed deep hurt at the role of the chancellor and felt the students should have shown more restraint.

A statement in Bengali said: 'Several aspects of the honourable minister's behaviour were very provocative - as a result the situation became complex. Juta strongly condemns the manner and tone in which a central minister attacked the vice-chancellor of a university standing on university premises.'

On Dhankhar, Juta said: 'We are deeply hurt by the role of the honourable chancellor and governor at the university yesterday (Thursday).'

It added: 'Instead of falling for provocation, the students should have shown more restraint.'