AAP wins 92 of Punjab’s 117 seats, continuing with its trend of registering landslide victories 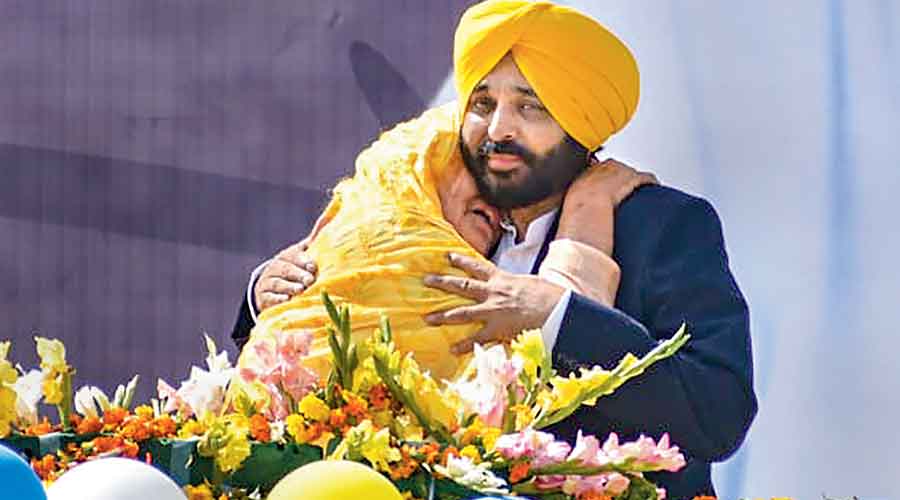 The Aam Aadmi Party swept the Punjab polls on Thursday, smashing the political establishment and prompting its leader Arvind Kejriwal to signal he now hoped for a breakthrough at the national level in the 2024 general election.

Less than a decade after its birth, the populist party formed on an anti-corruption plank now rules Delhi as well as Punjab — and won two seats in Goa too on Thursday.

“This is a revolution, it has shaken big chairs,” AAP national convener and Delhi chief minister Kejriwal told supporters at a celebration here.

Kejriwal named heavyweights who had lost their seats, among them former chief ministers Parkash Singh Badal of the Shiromani Akali Dal and Amarinder Singh and Charanjit Singh Channi of the Congress, apart from leaders such as Sukhbir Singh Badal, Bikram Singh Majithia and Navjot Singh Sidhu.

“For 75 years these parties (followed) the British system and looted the country…. We have changed this system in seven years…. First, there was a revolution in Delhi, then one in Punjab; now it will spread across the country,” Kejriwal said.

Delhi MLA Raghav Chadha — the AAP’s co-minder for Punjab where he was projected as the party’s Hindu face — said: “The AAP will be the Congress’s national and natural replacement…. Arvind Kejriwal is the hope of crores of people. If God is willing and people give an opportunity, he will definitely be seen in a bigger role, that of Prime Minister, soon.”

In Punjab, the AAP was ready to reap the electoral harvest of the yearlong farmers’ agitation against three central farm laws. The ruling Congress hurt itself with confusing messaging and infighting.

AAP chief minister-designate Bhagwant Mann, a satirist inspired by Italian comedian Beppe Grillo who leads the Five Star Movement — an anti-establishment party similar to the AAP — said his first step would be to generate employment.

Mann said he would take his oath of office in Bhagat Singh’s village Khatkar Kalan, and that pictures of the revolutionary freedom fighter and B.R. Ambedkar — rather than his own — would be put up in government offices.

The AAP’s promotion of the “Delhi Model” — of subsidised water and electricity, better schools and public healthcare — appears to have gone down well in a state facing an economic downturn and shrinking agricultural incomes. This is now a counter to the BJP’s “Gujarat Model” and “Double-Engine Growth”.

The zeal for change had to be “hammered in”, a party strategist said.

“After leaders like legal activist H.S. Phoolka quit, and the state party split in the years after 2017, the party invested in the propaganda for change,” the strategist said.

“We don’t have a personality-centric party…. Once the voters accepted our welfare model for change, they supported the party irrespective of the candidate.”

The credit for the triumph is being given to AAP observers Sandeep Pathak, a Delhi-based academic, and the party hand from Uttar Pradesh, Deepak Chauhan.

They built the campaign from scratch — doing surveys, creating and countering propaganda, selecting candidates and troubleshooting — while not being seen even once in public.

The party consciously kept away its NRI supporters to insulate itself from the influence of separatists.

Just before polling, estranged AAP leader and poet Kumar Vishwas accused Kejriwal of taking support from Khalistani separatists during the previous election — an unproven charge made in 2017 as well. The allegation threatened to scare away Hindu voters from the AAP.

On Thursday, Kejriwal said: “In the end they resorted to calling me a terrorist. Through the results we’ve got today, the people of this country have proved that I am not a terrorist but a good son of this soil.”

Channi, the first Dalit to become Punjab chief minister, lost both the seats he contested from to the AAP, with the Congress reduced to 18 seats from 77.

The party was torn by infighting between its state unit chief Sidhu, who wanted to be projected as candidate for chief minister, and other factions. The last-minute replacement of Amarinder with Channi as chief minister to prevent Dalit voters migrating to the AAP too failed.

The AAP carefully placed pictures of its leader Harpal Singh Cheema — a Dalit and the leader of the Opposition in Punjab — besides those of chief minister candidate Mann.

The Akalis, despite swapping the BJP for the BSP as an ally, could no longer draw water from the well of federalism and identity politics. Its local cadre quietly switched sides, hoping to survive on the crumbs from the AAP’s banquet until their party sees better days.

The BJP and its new allies — Amarinder and Akali rebel Sukhdev Singh Dhindsa — were swept away by a wave of rage against the Centre for refusing to repeal its new farm regime for a whole year and for defaming Punjabi peasants as Khalistanis.

It's revolution in Punjab: Kejriwal