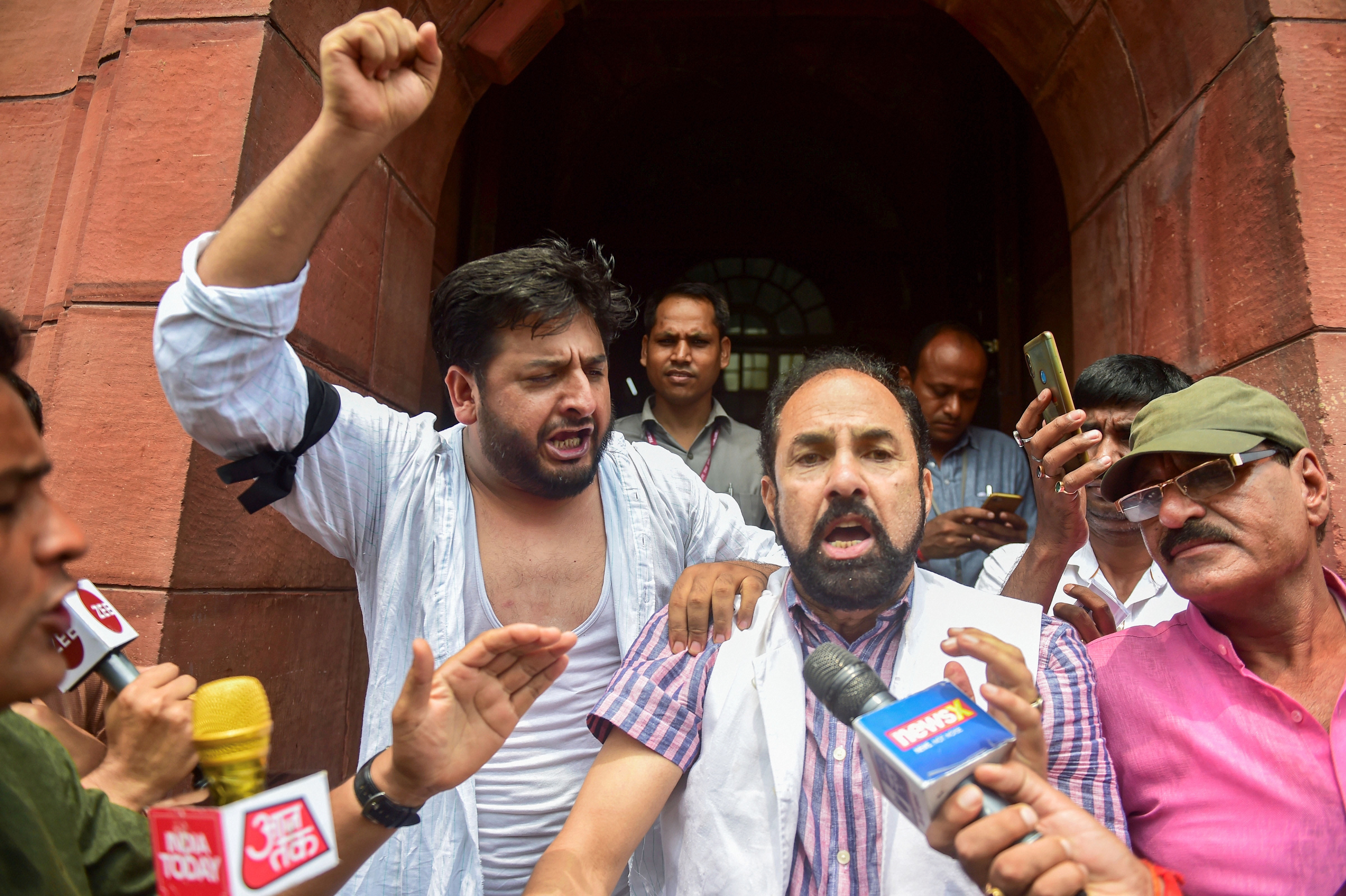 Congress senior leader Ghulam Nabi Azad said the move by the BJP-led government today had 'betrayed' the people of the state.

Former Jammu and Kashmir chief minister Omar Abdullah, also under house arrest, released a statement that said the decision was 'unilateral decision' by government, 'a total betrayal of trust'. The government 'resorted to deceit, stealth in recent weeks to lay ground for these disastrous decisions', he added.

The Narendra Modi government today made the BJP's and parent organisation RSS' longstanding demand see the light of day by bringing a Presidential order that scrapped special powers to Jammu and Kashmir under Article 370.

The Congress's P. Chidambaram said: 'This is the worst day in the history of the Constitution of India.'

Home minister Amit Shah, who made the announcements in the Rajya Sabha, said the order was brought under Part 3 of Article 370. 'Rashtrapati sansad ki is sipharish par ghoshana karte hain, ki... jis din Rashtrapati ke dwara is ghoshana pe hastakshar kiye jayenge, isey sarkari gazette mein prakashit kiya jayega, us din se Anuchhed 370 ke sabhi khand laagu nahin honge (The President on the dvice of the Parliament announces that... the day the President signs the order, publishes it in the gazette notification, from that day all sections of Article 370 will cease to be implemented),' Shah said.

Minutes after Shah read out the statement and the Opposition's shrill cries of 'No' filled the House, the gazette notification was out.

Section 3 of Article 370 says: 'Notwithstanding anything in the foregoing provisions of the article, the President may, by public notification, declare that this article shall cease to be operative or shall be operative only with such exceptions and modifications and from such date as he may notify.'

The Article says that 'the recommendation of the Constituent Assembly of the State'  shall be 'necessary before the President issues such a notification'. The Constituent Assembly of Jammu and Kashmir was dissolved in 1957. Since December 2018, Jammu and Kashmir is under President's Rule. Some lawyers said that making such sweeping resolution in such a scenario was legally problematic. Whether it will be challenged in court is to be seen.

BJP MPs described the move as 'bold', 'historic' and 'monumental'. Former finance minister Arun Jaitley said in a blog that no dynamic nation can allow this situation to continue. 'A historical wrong has been undone today. Article 35A came through the back door without following the procedure under Article 368 of the Constitution of India. It had to go,' he said. 'The decision of the government will help the people of Jammu and Kashmir the most. More investment, more industry, more private educational institutions, more jobs and more revenue will come,' he said.

In the Rajya Sabha, Shah also moved a bill seeking the state's bifurcation into two Union Territories, one of Jammu and Kashmir and the other of Ladakh. Later in the evening, the Upper House passed the bill.

Opposition parties in the Rajya Sabha and the National Conference and People's Democratic Party in Kashmir called the move anti-people and against democracy.

The move is this BJP government's boldest step yet on Jammu and Kashmir, an expected move as Shah had made it clear that abrogation of special powers was one of his areas of focus as the new home minister.

The BSP and AAP supported the resolution and the bill, but the Janata Dal (United) did not. The Samajwadi Party stood with Opposition parties during a news conference.

The handle of PDP chief Mehbooba Mufti, who is under house arrest, said: 'GOIs intention is clear & sinister. They want to change demography of the only muslim majority state in India , disempower Muslims to the extent where they become second class citizens in their own state.'

GOIs intention is clear & sinister. They want to change demography of the only muslim majority state in India , disempower Muslims to the extent where they become second class citizens in their own state.