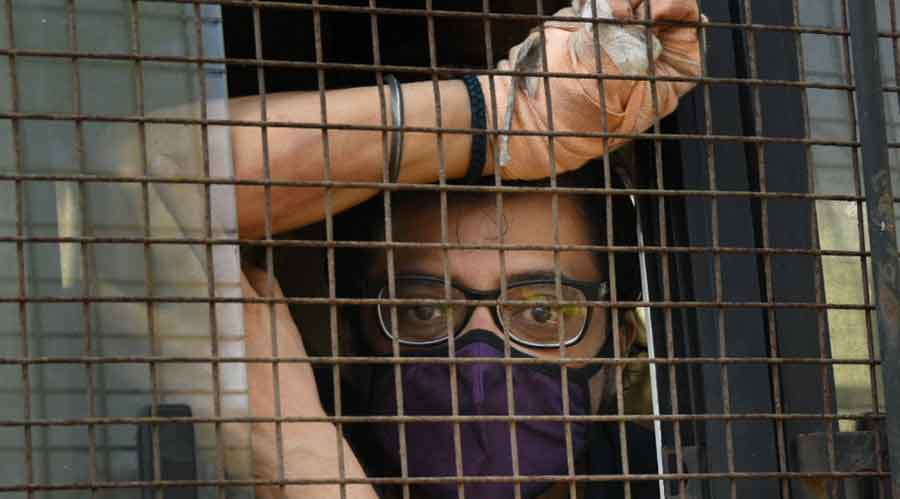 The Supreme Court on Wednesday granted interim bail to journalist Arnab Goswami in the 2018 abetment to suicide case.

A vacation bench of Justices D Y Chandrachud and Indira Banerjee also granted interim bail to two others -- Nitish Sarda and Parveen Rajesh Singh -- on personal bond of Rs 50,000 each.

The bench said their release should not be delayed and the prison authorities should facilitate this.

The top court directed that Goswami, Sarda and Singh shall not tamper with evidence and cooperate in the probe in the case.

Goswami, Editor-in-Chief of Republic TV, had challenged the Bombay High Court's November 9 order refusing to grant him and two others interim bail in the case and asking them to move the trial court for relief.

The top court, while hearing the plea, expressed concern over state governments targeting some individuals on the basis of ideology and difference of opinion.

"We are seeing case after case where high courts are not granting bail and failing to protect personal liberty of people," the bench said while hearing Goswami's plea.

The bench asked Maharashtra whether there was any need for custodial interrogation of Goswami, who is the Editor-in-Chief of Republic TV, saying the issue pertains to personal liberty .

It observed that Indian democracy is extraordinarily resilient and the Maharashtra government must ignore all this (Arnab's taunt on TV).

"Whatever be his ideology, least I don't even watch his channel, but if in this case constitutional court's do not interfere today, we are travelling the path of destruction undeniably.

"If the government targets individuals on this basis...You may not like television channels but this should not happen, ," Justice Chandrachud said, adding, the point is can you deny personal liberty of a person on these allegations.

The bench observed that assuming the FIR is gospel truth but that is a matter of investigation.

"Is not paying up money abetment to suicide? It will be a travesty of justice if bail is not granted while FIR is pending, the bench told senior advocate Kapil Sibal who was appearing for the state."

Justice Chandrachud also observed that courts are being attacked for judgements delivered by them.

Senior advocate Harish Salve, appearing for Goswami, referred to various cases lodged against him and the channel and alleged that Maharashtra government is targeting him.

This is not an ordinary case and the Bombay High Court being a constitutional court should have taken note of the incidents. Is this a case where Arnab Goswami is put in Taloja jail with hardened criminals, Salve said.

I would urge the case to be transferred to the CBI and punish him if he is guilty. What will happen if a person is granted ad-interim bail, he said.

Sibal referred to the facts of the case and said that details of investigation conducted in the matter are not before the apex court and if it intervenes at this stage, it would set a dangerous precedent.

Senior lawyer Amit Desai, also appearing for the state, said this is not a case where the court should exercise its extraordinary jurisdiction to grant bail at interim stage.

He said the state's ability to investigate a criminal case has to be respected.

Goswami has challenged the Bombay High Court's November 9 order refusing to grant him and two others interim bail in the case and asking them to move the trial court for relief.

The three accused were arrested by Alibaug police in Maharashtra's Raigad district on November 4 in connection with the suicide of architect-interior designer Anvay Naik and his mother in 2018 over alleged non-payment of dues by companies of the accused.

The high court had, while rejecting the interim bail pleas of Goswami and two other accused Feroze Shaikh and Nitish Sarda, had said, "no case has been made out for us (court) to exercise our extraordinary jurisdiction".

Apart from seeking the interim bail, the journalist and other accused had also sought a direction from the high court for staying the investigation into the case and quash the FIR against them.

The high court will hear their pleas seeking to quash the FIR on December 10.

Goswami was arrested on November 4 from his Lower Parel residence in Mumbai and taken to Alibaug in neighbouring Raigad district.

He and the two other accused were later produced before a magistrate who refused to send them in police custody and remanded them in judicial custody till November 18.

Goswami was initially kept at a local school which is designated as a Covid-19 quarantine centre for the Alibaug prison.

He was on Sunday shifted to the Taloja jail in Raigad district after allegedly being found using a mobile phone while in judicial custody.