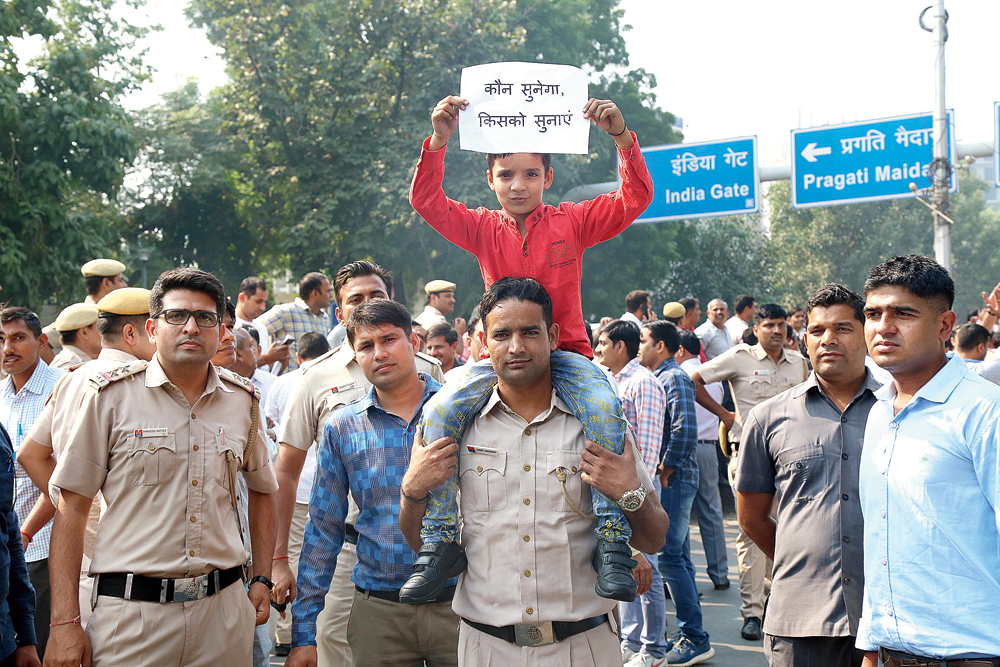 Carried on the shoulders of a Delhi policeman outside the law-enforcement agency’s headquarters in New Delhi on Tuesday, a child holds aloft a placard that asks: “Who will hear us, who should we tell?”
Picture by Prem Singh
Imran Ahmed Siddiqui   |   New Delhi   |   Published 05.11.19, 08:28 PM

Protectors turned protesters and pleaded for protection in the national capital on Tuesday as thousands of Delhi police personnel struck work, jeered officers and took potshots at the Narendra Modi government that runs the force.

Countless policemen and their relatives laid siege to the police headquarters in New Delhi to demand action against lawyers who had beaten up the men in khaki since Saturday following a parking brawl in the Tis Hazari courts’ complex.

“How’s the Joshhh... Very low Sir,” read a placard in a direct and daring criticism of the Prime Minister who used to invoke the “How’s the Josh” dialogue from a movie on the 2016 surgical strike on terror launch-pads in Pakistan to underscore the high morale among uniformed personnel.

“It was almost like a mutiny,” a home ministry official said on Tuesday.

The protest dragged on for over 10 hours, marked by the silence of Union home minister Amit Shah, the latest “Iron Man” whose department directly controls Delhi police although the national capital territory has a separate government.

After a day of strife and rancour, a truce was reached at night, the siege was withdrawn and the following decisions were announced. The points cover almost all the demands raised by the police personnel during the day.

“We have identified the lawyer named Tanwar who had slapped a cop on Monday outside the Saket court. He will be arrested soon,” an officer said on Tuesday night.

Through the day on Tuesday, Delhi police personnel openly flayed senior officers, including police commissioner Amulya Patnaik, for their reluctance to back them.

“If you want to suspend us, do it. We’ll sit at home. But we haven’t joined this profession to get kicked around,” Mahendra Singh, a policemen at the protest, told Reuters.

Policemen, including constables, head constables and assistant sub-inspectors, started gathering outside the police headquarters in central Delhi near ITO from 10am to express their anger over the attacks by lawyers since Saturday.

At least 20 policemen and eight lawyers were injured and 21 vehicles vandalised in the clash on Saturday. The lawyers alleged that the police fired at them.

Holding placards that read “Protectors need protection”, “We are not punching bags” and “We want justice”, the angry cops chanted slogans against the top brass and alleged that the police commissioner was protecting lawyers. Later in the day, some of the protesters entered the headquarters by scaling the iron gates.

Home minister Shah’s silence drew comment through the crisis. Shah, who reached his North Block office in the morning, left in the afternoon for his residence where he chaired a review meeting on Jammu and Kashmir with the ministry’s top bureaucrats.

“It is very surprising that the home minister has not spoken a word on the issue even though Delhi police directly report to him. The protest has taken the shape of a virtual mutiny against the police commissioner. Shah is known as a decisive leader but his silence is very puzzling,” an IPS officer said.

Another officer said: “We were hopeful that Shah, who is being viewed as the “new Iron Man”, will speak up and reassure the protesting cops. But that assurance never came.”

The police personnel felt badly let down after the high court order on Sunday that suspended their colleagues. “No similar action against the lawyers was ordered and no compensation given to the injured policemen. It is very unfortunate that the court did not pass any order against the lawyers despite video showing the assault,” said a cop.

Besides, there is widespread resentment that no superior police officer visited the hospital to enquire about the injured cops.

Addressing the protesters, police chief Patnaik said: “I appeal to all to maintain peace. It’s trying times for us. We need to fulfil the responsibility of maintaining and assuring law and order. It is expected from us that we the protectors of law will continue to assure law and order in the capital.”

“In the past few days, there have been certain incidents in the capital which we handled very well. The situation is improving after that,” he said.

Patnaik urged the police personnel to return to work and asked them to behave like a “disciplined force”. But they continued with the sloganeering and jeered the police commissioner during his address.

A retired IPS officer sought to compare the protest outside the police headquarters to the unprecedented midnight raid last October on the CBI headquarters by the Centre.

“What we saw today was complete anarchy in the capital. Who is accountable for this? Isn’t it a strong government which always claims all is well?” the reitred officer said.