Advertisement
Home / India / Everyone deserves to have a voice no matter who they are, says Antony Blinken

Everyone deserves to have a voice no matter who they are, says Antony Blinken 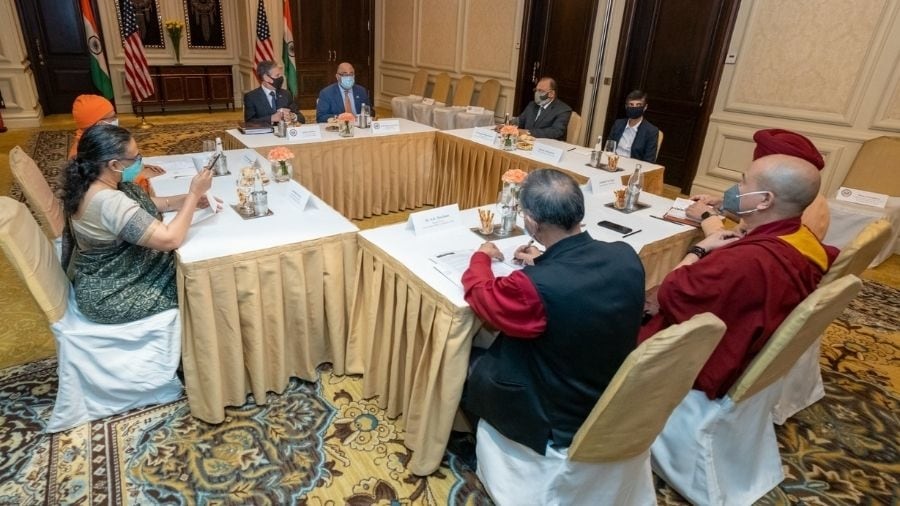 All people deserve to have a voice in their government and be treated with respect no matter who they are, US Secretary of State Antony Blinken asserted on Wednesday while noting that Indians and Americans believe in human dignity, equality of opportunity, the rule of law, fundamental freedoms, including freedom of religion and belief.

Addressing civil society members in his first public event after arriving here and ahead of his meetings with the Indian leadership, Blinken said that both US and India share a commitment to democratic values and it is part of the bedrock of the bilateral relationship.

The US Secretary of State said that successful democracies include "thriving" civil societies, noting that they are needed to make democracies "more open, more inclusive, more resilient, more equitable."

Blinken cited business cooperation, educational engagement, religious and spiritual ties and ties between millions of families as some of the key pillars of the overall relationship.

"Perhaps most important, we're connected by shared values, and I believe shared aspirations, that are common to our people. The Indian people and the American people believe in human dignity, in equality of opportunity, the rule of law, fundamental freedoms, including freedom of religion and belief," he said.

"We believe that all people deserve to have a voice in their government and be treated with respect no matter who they are. These are fundamental tenets of democracies like ours, and our purpose is to give real meaning to these words and constantly renew our commitment to these ideals," he added.

The transcript of his address was released by the US State department.

In the course of his remarks, Blinken referred to rising global threats to democracy and international freedoms, talked about "democratic recession", noting that it is vital for India and the US to continue to stand together in support of these ideals.

"And of course, both of our democracies are works in progress. As friends, we talk about that, because doing the hard work of strengthening democracy and making our ideals real is often challenging.

"We know that firsthand in the United States, where we aspire to be, in the words of our founders, a more perfect union. That's an acknowledgement from day one of our country that in a sense we will always fall short of the mark, but that the way to make progress is by constantly trying to achieve those ideals," he said.

Sometimes that process is "painful, sometimes it's ugly", but the strength of democracy is to embrace it, Blinken added

"At the same time, we celebrate our achievements. Here in India, that includes the free media, independent courts, a vibrant and free and fair electoral system -- the largest expression of free political will by citizens anywhere in the world," he said.

"At a time of rising global threats to democracy and international freedoms - we talk about a democratic recession -- it's vital that we two world leading democracies continue to stand together in support of these ideals," he noted.

Blinken said he is in India to underscore the importance of the relationships and to try to deepen the ties and extend the cooperation.

"I think it's hard to find countries with more -- who do more together in more different areas than with the United States and India," he said.

Later he in a tweet, he said,"I was pleased to meet civil society leaders today. The U.S. and India share a commitment to democratic values; this is part of the bedrock of our relationship and reflective of India's pluralistic society and history of harmony. Civil society helps advance these values."

Ahead of his visit, the Indian side had indicated that it is prepared to engage with the US on issues relating to human rights and democracy after a senior Biden administration official said that Blinken will raise these matters with Indian leaders.

US acting assistant secretary for South and Central Asian affairs Dean Thompson said on Friday that Blinken will raise issues of human rights and democracy with Indian officials during the visit.

Following the comments, government sources said India is proud of its achievements in upholding democratic values and human rights and it is open to engaging with those who recognise diversity.