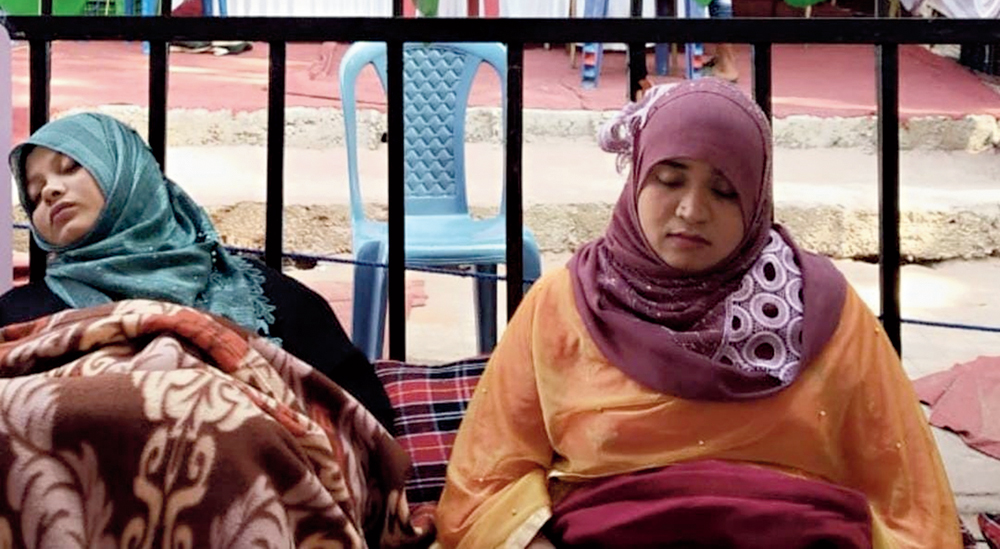 A small group of women who have been on a fast since Tuesday at Bilal Bagh, Bangalore’s own replica of Shaheen Bagh, have decided to press ahead with their hunger strike to urge the Karnataka government not to roll out the National Population Register.

The relay hunger strike was originally scheduled to conclude on Thursday but the activists said they would extend it as long as it takes to convince the BJP-led state government to scrap plans for the controversial enumeration rumoured to begin in April.

The women are among the 200-odd protesters at Bilal Bagh who began their indefinite sit-in against the new citizenship matrix 12 days ago.

“The women originally started this as a three-day hunger strike. But now they don’t want to stop it until the government gives an assurance regarding the NPR,” student activist Najeeb told The Telegraph on Thursday.

“Warsi and Amreen were among the four women who started this hunger strike. Now many more women are expressing their willingness to take part in the hunger strike.”

What these fasting women now plan to do is 48-hour shifts so that the agitation can go on indefinitely.

The round-the-clock sit-in at Bilal Bagh, essentially a tent, began as a spontaneous movement by women and some children of the Muslim-dominated area and student activists, their main demand being the withdrawal of the Citizenship Amendment Act.

“We are ready to continue this hunger strike until this black law (the CAA) is repealed and the government stops rolling out the NPR,” Warsi, who has been at the spot from the first day, told this newspaper.

“I am ready to die for the cause and will continue this hunger strike until we achieve the goal.”

The protesters had initially faced some issues with police sniffing around the place and taking down their names, phone numbers and addresses.

“The police stopped coming after the Supreme Court upheld people’s right to protest,” she said, citing the Shaheen Bagh case.

The top court had on Monday appointed a committee to talk to the protesters of Shaheen Bagh, who are on dharna on a Delhi road for the past two months, and see if they would be willing to move their sit-in to another location.

The court said it was important to allow people to protest but added that the blockade of a “public road is troubling us”.

Warsi said they started the hunger strike to “convince the government about our intent, which is more important than our own health or personal suffering”.

“But what we see is that neither the Centre nor the state government is bothered about our concerns,” she said.

At least one outspoken celebrity, however, was inspired enough to drop by. Actor Naseeruddin Shah made a surprise visit to Bilal Bagh on February 14 to express solidarity with the students and others protesting against the citizenship matrix.

Akmal Pasha, activist and legal adviser to the protesters, said the Karnataka government should have reached out to the women of Bilal Bagh. “Instead, they are getting ready to roll out the NPR by the second week of April,” Pasha said.

The planned enumeration involves a list of questions and the fear is that the NPR would be the first step towards the proposed National Citizens Register, the other controversial exercise in the citizenship tripod.

In the next phase of their agitation, Pasha said, the Bilal Bagh protesters would take a call on whether to take part in the NPR enumeration.

“We will be more than ready to participate in the regular census. But we have serious objections to the NPR asking the date of birth of our parents.”

The Centre has said the NPR and the NRC were not linked and not all questions were mandatory.