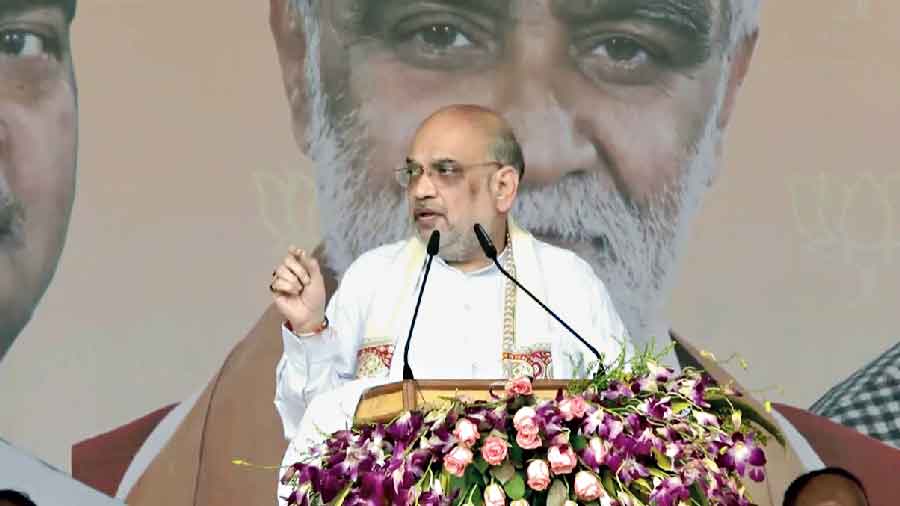 Union home minister and senior BJP leader Amit Shah sought a “full majority” for his party in Bihar instead of a “langdi sarkar” (lame government) while kick-starting the campaign for the 2024 Lok Sabha and 2025 Assembly elections with a public meeting here on Friday.

“Give your mandate for 2024 that you want a government under the leadership of Prime Minister Narendra Modi and 2025 will automatically improve. A BJP government will come to power here,” Shah said.

“You voted for the BJP, but always gave a langdi sarkar (lame government) here. Give a full majority to our party this time and then see how we turn Bihar into the most developed state of the country. The people and the youth of Bihar should see the development in the states where we have our full governments,” he added.

The home minister arrived on a two-day visit to the Seemanchal region comprising Purnea, Kishanganj, Araria, Katihar districts tucked in the northeast corner of the state. It shares borders with Bengal and Nepal, is located very close to Bangladesh, and is counted among the poorest areas in Bihar.

According to the 2011 Census, the four districts in the Seemanchal region have a sizeable population of Muslims, ranging from 30 to 68 per cent. Shah’s decision to start the campaign from here is being seen as part of the BJP strategy that hinges on religion and communal polarisation.

Lalu Prasad and chief minister Nitish Kumar had been cautioning that Shah’s visit to the region would be detrimental to harmony as the high minority population in the four districts could help the BJP raise the bogey of changing demography and instil fear among Hindus.

“My visit was giving a stomach ache to the pair of Lalu and Nitish. They were saying that I was coming to incite a fight or I will do something before going from here. There is no need. They have already done such things here throughout their lives,” Shah asserted.

However, Shah did try to play on the fears while expressing happiness over the large number of people who had assembled to listen to him at the Jan Bhavana Rally.

Shah said atrocities were being done on the people belonging to the Santhal tribe residing in the Seemanchal region and Modi’s welfare schemes for the Scheduled Tribes were not reaching them. He also asserted that crime had skyrocketed in the state since the day the new government with Nitish and Lalu as partners was sworn in.

The Union home minister lambasted Nitish for ditching people and parties throughout his political career for the lust of power.

“Nitish Kumar has ditched the BJP again and gone with Lalu Prasad in his greed to become the Prime Minister. But now Lalu should be alert because nobody knows when Nitish will ditch him to sit in the lap of the Congress. We had made him the chief minister despite his party having just half the numbers that we had. He has no ideology. His policy is that his position should remain intact,” Shah added.

Shah wondered how Nitish would defend Lalu, an accused in several corruption cases, and against whom Nitish used to petition the CBI. He also recounted the welfare schemes brought by the BJP government at the Centre and gave a quick account of the expenditure under the Rs 1.25 lakh crore special package given to the state after the 2015 Assembly elections.

Many BJP leaders raised issues related to Bangladeshi infiltrators and activities of the Popular Front of India (PFI).

Shah held a meeting with all senior BJP leaders, MPs, MLAs and MLCs of the state at Purnea. Sources said he discussed the forthcoming elections and the party’s strategy. He moved to Kishanganj in the evening where he would stay till Saturday evening, chairing several meetings and also visiting a Sashastra Seema Bal (SSB) camp on the Indo-Nepal border.