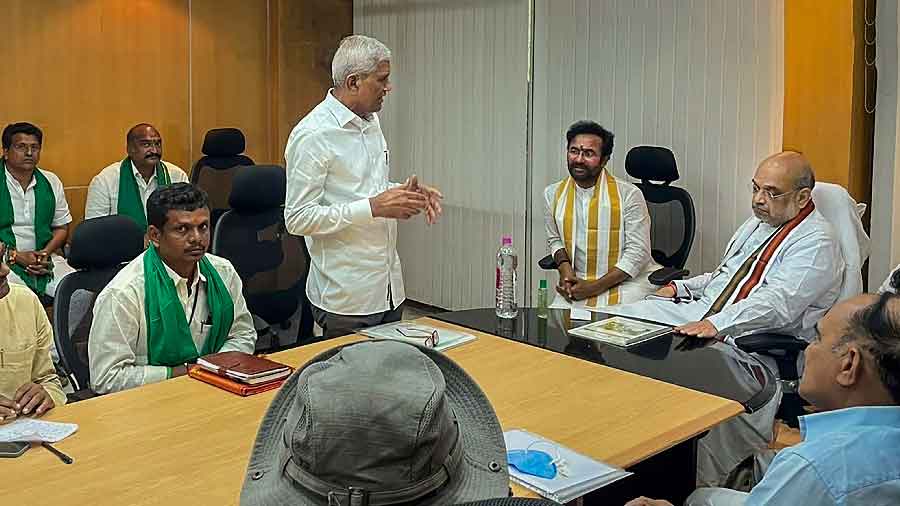 Even after the Centre gave over Rs two lakh crore to Telangana, the state has plunged into a debt trap, Union Home Minister Amit Shah said on Sunday and claimed that the K Chandrasekhar Rao-led government was anti-farmer.

Shah further added that the CM was making false promises and his countdown had begun.

Speaking at a public meeting at Munugode, about 85 km from here, where a by-poll is scheduled to be held later, Shah alleged that the TRS government is committing a sin by keeping the farmers away from PM Fasal Bhima Yojana and assured that if the BJP is voted to power in the next Assembly elections, it will ensure that every grain of paddy will be procured from farmers.

"Despite over Rs 2 lakh crore help from Modi's government, Telangana has plunged into debt. I promise that if Rajagopal Reddy wins and the BJP is voted to power (in the next elections), Telangana will also be developed like any other state in the country," Shah said.

He further said though the central government has reduced fuel prices twice, the Telangana government did not bother to slash VAT charges thus making the state as a costlier place for petrol and diesel in the country.

Reacting to Amit Shah's allegations, Telangana Energy Minister G Jagadish Reddy said his statement was unbecoming of a Union Home Minister. He spoke like a booth level leader and there is nothing more than that.

"When it comes to petrol prices, it is like a thief shouting at another thief. I don't know why he did not mention the gas cylinder prices. He should have spoken about it also. The speech was packed with lies and jealousy, Reddy told reporters.

He added that Shah did not provide any reply to the questions posed by the KCR in his address at a public meeting in Munugode on Saturday. Reddy claimed that the state government implemented the best insurance policy in the world for the farmers, under which more than one lakh ryots have been paid insurance.

Earlier, alleging that the TRS government was not celebrating September 17 as Liberation Day as promised due to "fear" of the AIMIM party, Amit Shah said the BJP if voted to power will hold the celebrations.

He charged that the Kaleshwaram Lift Irrigation project has become like an ATM for Rao's family.

"The TRS government is an enemy of farmers," Shah said referring to the issues over paddy procurement from the state.

Pointing to the poll promises of the TRS, he said KCR failed to give three acres of land, two-bedroom houses to dalits and Rs 3,000 financial help to unemployed youth. "Leave alone houses, you (KCR) are even obstructing the toilets which are being provided by Prime Minister Narendra Modi," he said.

Shah also alleged that except the family members of KCR, no youth in the state secured jobs as promised by his government.

Chandrasekhar Rao earlier promised that a Dalit will become the CM if TRS was voted to power, but now his son will occupy the post if the party wins again.

He asked the public whether any Dalit is getting 'Dalit Bandhu' scheme under which the state government would provide Rs 10 lakh to set up any business of their choice.

Union Minister for Tourism G Kishan Reddy, among others spoke in the meeting.

K Rajagopal Reddy, Congress legislator from Munugode Assembly constituency, who resigned as MLA, joined the BJP at the meeting.

The Union Minister further said Rajagopal Reddy's win will ensure the downfall of KCR government in the next Assembly polls.

Popular actor Jr NTR, former Chief Minister NT Rama Rao's grandson, who acted in the recent movie 'RRR', is also scheduled to meet Shah in the night. It is not clear what the agenda of the meeting is.

With PTI and ndtv.com inputs