Advertisement
Home / India / Along a far border, the margins

Along a far border, the margins 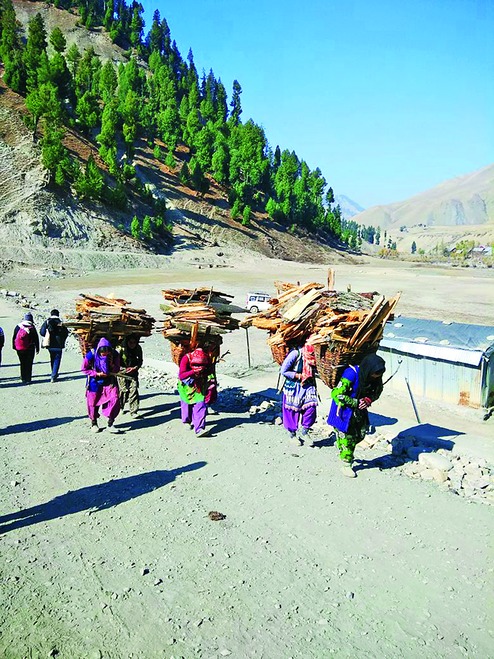 Imagine a dystopian land where hopes lie buried, dreams have paled, electricity is non-existent, telecom services don't reach, and the computer is just a fancy notion. This is a land where metalled roads are a rarity, where women carrying heavy logs of wood in wicker baskets is a common sight, where children walk nearly 16 to 18 kilometres each day to attend school - a few of which are perched atop steep hills.

In this region, army checkposts greet you at nearly every bend; civilians tread cautiously. They have defence borders cutting through their homes and fields, forcing them to take detours to access their own agricultural lands.

Gurez Valley rarely sees visitors, especially at this time of year. Dawar - the only place with telephone services and Internet connectivity - is the zone's Lakshmanrekha. Few dare to venture beyond that. So when we undertake a Gandhian style weeklong hike through this rough, undulating terrain, it arouses curiosity if not anything else. To alleviate the freezing temperatures there's the villagers' warm hospitality.

Better known as shodhyatra (loosely, research journey), this trek into remote regions of India in extreme weather conditions is in search of grassroots innovations, traditional knowledge and unsung centenarians. Organised by the Ahmedabad-based Society for Research and Initiatives for Sustainable Technologies and Institutions and led by its founder Anil Gupta, it has been going strong for over two decades.

The shodhyatra reveals human endurance levels and ingenuity in the face of odds. The trek through the valley is no exception. We come across men, women and children, each of whom vouch for peace, a wee bit of happiness, and are eager to think up feasible ideas to achieve that.

Tauseef, a local innovator, has set a precedent. Due to heavy snowfall, people in these villages are usually confined to their homes for a good half year. To keep themselves warm at night, they light bukharis or iron stoves. Each bukhari requires 35 to 40 kilos of wood daily.

"Tauseef has designed an energy-efficient bukhari that saves both energy and wood. It uses four to five kilos and burns longer," says Prof. G.M. Bhat of Kashmir University, one of the yatris. "We, as part of the National Innovation Foundation - an autonomous body of the government of India's Department of Science and Technology - provided Tauseef necessary support. Today his idea is being deployed and tested in some of the villages."

In Wazarithal, Class X students Khalid Hussain and Mir Zamman have used local herbs to make tablets that can cure stomach ailments. Arshad Ahmad Lone from the same village has come up with an innovative track shoe made of willow. It provides a firm grip to help wade through snow.

Necessity spurs innovation. It also accounts for large families in these parts. "We need helping hands to survive in these harsh conditions. From felling trees to working on the fields, tending to livestock, clearing the snow and working as labourers - there is a lot of work to be done," says a villager in Abdulain.

Baduab's Manan Lone is more vocal. He says, "No one knows when we will get electricity. Diesel generators light up our homes for four to five hours every evening. For the rest of the day, we depend on solar panels. Living on the margins, we are forever marginalised."

There is some truth in that, as the district development commissioner (DDC) of Bandipora, Sajad Hussain, admits. "The villages are extremely backward. They are not electrified. There are landslides, heavy snowfall and devastating fires. People face unimaginable hardships. They have neither critical care facilities nor any infrastructure. It will take another five years, if not more, for them to see any development."

Initiatives such as Digital India and Swachh Bharat Abhiyan hold no water here and the pledge for a New India by 2022 seems nothing short of a farce. A board on the premises of the DDC's office in Bandipora emphasises - "This is corruption free zone. Let's pledge to make our district corruption free."

This is easier pledged than done. Mid-day meals in government schools here are served for three months instead of round the year. "Seventy quintals of food are allocated for schoolchildren, but only 10-11 quintals reach the schools," says a teacher. "So meals are provided from mid-March, when schools reopen after the harsh winters, to early June. No one questions that," he shrugs.

In all the villages we trek through, we spend the nights in school buildings. Teachers cook meals for yatris and ensure we are comfortable. Locals drop by for a chat - word has got around that the shodhyatris are here. A soft-spoken primary health centre doctor in Barnei is one of them. "The government can at least provide telephone services," he points out, adding, "The situation is terrible during winters. If anyone falls ill, he or she has to be carried on a stretcher through snow-ridden paths for over 10 kilometres to reach the nearest health centre."

A week later, we pack up and return to the wired world. Indeed, there is a gaping disconnect here between life and times. But the yatra has taken us beyond a less explored geography. It has connected us with a forgotten people.