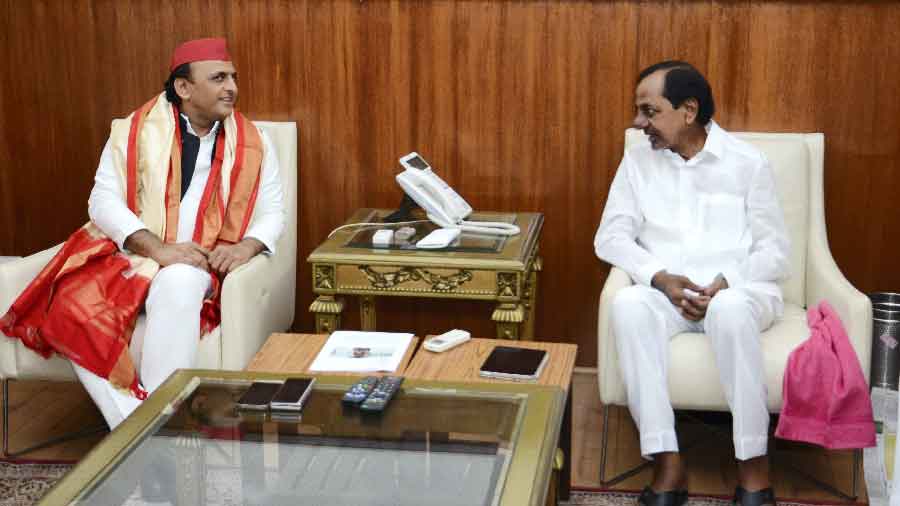 Rao is in Delhi as part of his week-long tour to attend national-level political and social programmes. Yadav met the chief minister at the latter's official residence on the Tughlaq Road here.

According to the Telangana chief minister's schedule, he will meet political, media and economic experts and also extend help to the families of soldiers who sacrificed their lives for the country.

Rao will also meet the families of those who died during the "fight for farmers' rights" against the Centre.

On May 22 afternoon, he will embark on his Chandigarh tour.

Rao will meet 600 families of farmers who laid down their lives during the nationwide farmers' agitation against the now-repealed Central farm laws.

As financial assistance, he will distribute Rs 3 lakh to each family. The cheque distribution will be taken up along with his Delhi and Punjab counterparts Arvind Kejriwal and Bhagwant Mann.

The assistance will be given to the farmers' families belonging to Punjab, Haryana, Uttar Pradesh and Delhi.

On May 26, Rao will reach Bengaluru to meet former prime minister H D Deve Gowda. From there, he will go to Ralegan Siddhi in Maharashtra the following day to meet activist Anna Hazare. He will then travel to Shirdi and offer prayers to Sai Baba and return to Hyderabad the same day.

On May 29 and 30, he will embark on a tour of West Bengal and Bihar to meet the families of the soldiers who died in the Galwan Valley. He will extend assistance to those families, the release said.