Centre, while assuring the court that strong measures were being taken, blames Punjab over stubble burning 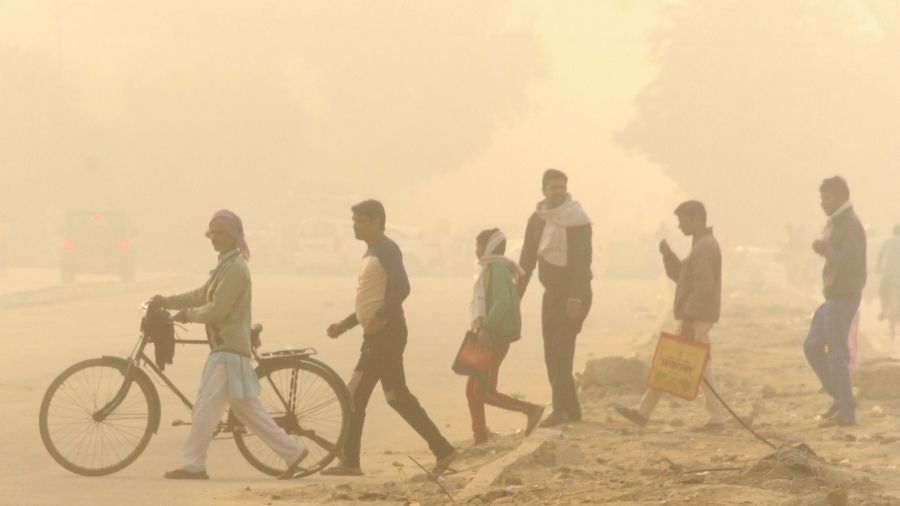 Air quality in Delhi was reported to be in the "severe" category on Saturday, prompting the Supreme Court to ask the government about the measures it was planning to tackle the "emergency situation".

Delhi's air quality index (AQI) was recorded at  473. In  neighbouring areas of Noida and Gurgaon, AQI readings were 587 and 557 respectively.

Chief Justice NV Ramana, hearing a petition on air pollution in the national capital, asked the Centre, "You tell us how do you plan to take the emergency measures? Two-day lockdown? What is your plan on lowering the AQI (Air Quality Index) levels?" reported ndtv.com.

Breathing the Delhi air is "like smoking 20 cigarattes a day," the state government admitted in the court, stressing, "We agree to the gravity of the situation."

"You see how bad the situation is....even in our houses, we are wearing masks," the Chief Justice added.

The Centre while assuring that strong measures are being taken to combat the situation, seemed to blame Punjab over stubble burning. "We are taking steps to stop stubble burning. But in (the) last five-six days the kind of pollution, we have seen is because of (the) stubble burning in Punjab. The state government needs to buckle up... stubble burning (is) happening in farms," it said.

Chief Justice Ramana said in his reply, "Why are you projecting like pollution is because of farmers? It is only certain percentage of pollution. What about the rest? What are you doing to control the pollution in Delhi? We have nothing to do with which government ....state or centre.You tell us what is your proper plan...not about 2-3 days," the ndtv.com report said.

An AQI between zero and 50 is considered 'good', 51 and 100 'satisfactory', 101 and 200 'moderate', 201 and 300 'poor', 301 and 400 'very poor', and 401 and 500 'severe'. Authorities on Friday had advised people to limit outdoor activities and told government and private offices to cut vehicle use by at least 30 per cent as air quality in Delhi-NCR inched towards the emergency level amid a rise in emissions from farm fires and unfavourable meteorological conditions.

Over 4,000 farm fires, accounting for 35 per cent of Delhi's pollution on Friday, played a major role in pushing the 24-hour average Air Quality Index (AQI) to 471 by 4 pm. It was 411 on Thursday. A sub-committee on Graded Response Action Plan (GRAP) said meteorological conditions will be highly unfavourable for dispersion of pollutants till November 18 and agencies concerned must be fully ready to implement measures under 'emergency' category.

Delhi recorded a minimum temperature of 11.1 degrees Celsius, three notches below the season's average, on Saturday. The relative humidity was recorded at 90 per cent.