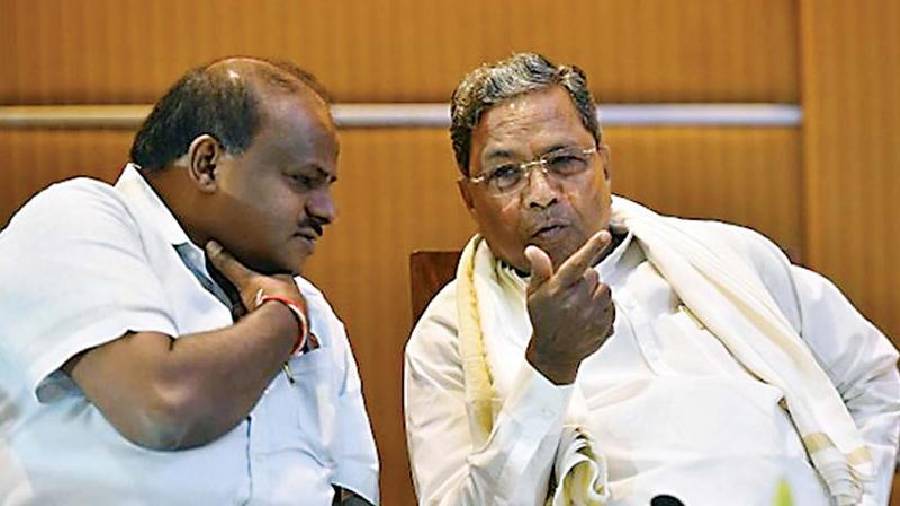 The friendly conversation between Bollywood actor Ajay Devgn and Kannada actor Kichcha Sudeep took a political turn with Chief Minister Basavaraj Bommai and former Karnataka chief ministers Siddaramaiah and H D Kumaraswamy joining the debate and insisting that Hindi is like any other language in India and not the national language. However, Bommai's cabinet colleague Dr C N Ashwath Narayan said there is nothing wrong in learning Hindi as a communicative language at the national level.

"Whatever Sudeep has said is correct. After the formation of states on linguistic basis, languages got importance there (in those regions). That is supreme. The same has been said by Sudeep, which is right. Everyone should accept and respect it," the Chief Minister told reporters in Hubballi. "Hindi was never & will never be our National Language. It is the duty of every Indian to respect linguistic diversity of our country. Each language has its own rich history for its people to be proud of. I am proud to be a Kannadiga!!" Congress stalwart Siddaramaiah tweeted.

Hindi was never & will never be our National Language.

It is the duty of every Indian to respect linguistic diversity of our Country.

Each language has its own rich history for its people to be proud of.

I am proud to be a Kannadiga!! https://t.co/SmT2gsfkgO

The JD(S) second-in-command Kumaraswamy too aired a view similar to Siddaramaiah and backed Sudeep. "Actor @KicchaSudeep saying that Hindi is not a National Language is correct. There is nothing to find fault in his statement. Actor @ajaydevgn is not only hyper in nature but also shows his ludicrous behaviour."

According to him, Hindi is also one of the languages like Kannada, Telugu, Tamil, Malayalam and Marathi. "India is a garden of several languages. Land of multi cultures. Let there be no attempts to disrupt this," he added in his series of tweets on Thursday on the issue.

Just because a large population speaks Hindi, it doesn't become a national language, Kumaraswamy said adding, less than nine states, Kashmir to Kanyakumari, have Hindi as second or third language or not even that.

"This being situation what is the truth in Ajay Devgan's statement? What do you mean by not to dub? Kumaraswamy sought to know.

According to him, from the beginning, 'Hindi' based political parties at the Centre have been making efforts to destroy regional languages. The Congress started 'suppressing' regional languages and that is being continued by the BJP, he charged.

However, Ashwath Narayan said there will be topmost priority for Kannada in the state and simultaneously it is necessary to treat Hindi as the communicative language at the national level.

"There is no need to hate any language in order to strengthen our own language. We need to do what is possible in a constructive manner to nurture Kannada but there is nothing wrong in learning Hindi when we are giving overemphasis to learn English," Narayan maintained. Bollywood actor Devgn and Sudeep engaged in a 'brotherly argument' on Twitter on the topic of whether Hindi is a national language or not.

However, Sudeep clarified that the context in which he made the statement was different from the way it was perceived and that it was not intended to provoke, hurt or start a debate.

The trigger for the argument was Sudeep's statement a few days ago during a function in Bengaluru where the who's who of the Kannada film industry celebrated the nationwide success of 'KGF-2' starring Yash. When the compere of the event said 'KGF-2' had a pan-India effect, Sudeep said Hindi is no more a national language.