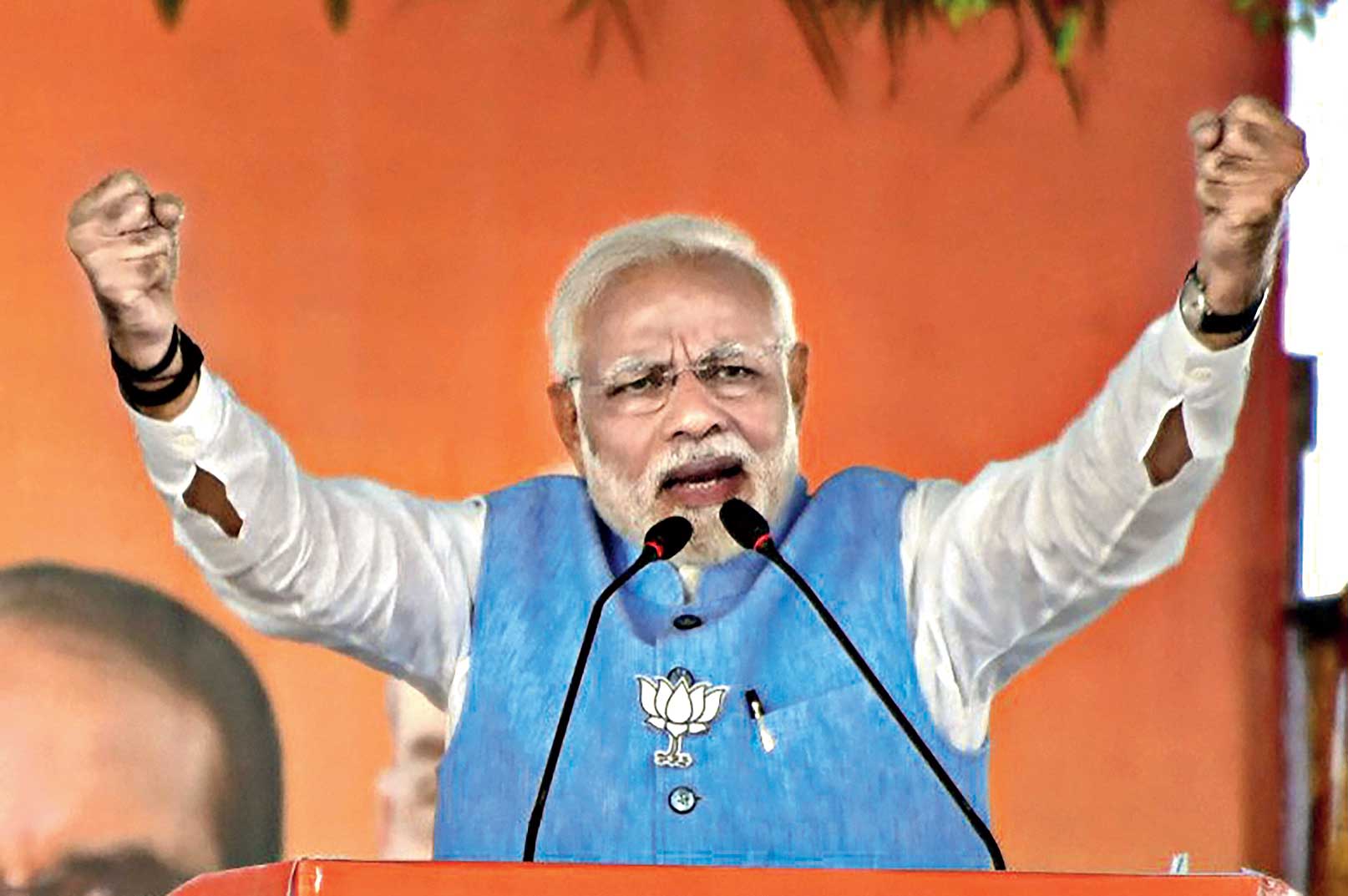 Narendra Modi addresses a public meeting in Vidisha on Sunday ahead of the Madhya Pradesh Assembly elections. At the rally, the Prime Minister attacked the Congress for dragging his parents’ name into the campaign.
(PTI)
Sanjay K. Jha   |   Bhopal   |   Published 25.11.18, 09:33 PM

Feeling a city’s pulse becomes easy if the whispers in the corridors of power echo what the streets are noisily conveying.

Bhopal, the picturesque capital of Madhya Pradesh, is beginning to display an unusual convergence of opinions, from the elite drawing room to the market to the slum.

While a senior bureaucrat told The Telegraph, “strictly off the record”, that the BJP might struggle to cross the halfway mark, a retired IAS officer bluntly said the election was a “lost case” for the ruling party.

But the veteran added: “The BJP will survive whether it wins or not, but the Congress cannot afford to lose this time.”

His logic: “If the Congress loses under such circumstances (of anti-incumbency, corruption scandals, joblessness and farm distress), what will its leaders and workers do? Four successive defeats will mean death for the party.”

He had a blunt message for the Congress: “The stage is set for a change. Both the rich and the poor, the powerful and the vulnerable, are angry (with the government). If the BJP survives this, the Congress should shut shop.”

Asked whether the poor were not receiving food grains at Re 1 a kg, his reaction was: “Sirf khana hai kya? Nikamma bana diya logon ko (Is eating all that we need? They have turned people into good-for-nothings).”

A young boy in the Anna Nagar slums said: “The BJP seems in trouble. When Hema Malini came here the last time, a large crowd welcomed her. This time her visit was a flop.”

Purushottam Sarathe, a shopkeeper in an upscale market, wondered: “It’s difficult to say why (chief minister) Shivraj (Singh Chouhan) is in trouble despite his good performance. He has done so much for the farmers, for rural housing and for the Ladli scheme (a health and education scheme for young girls) and is yet in trouble.”

Even the Rashtriya Swayamsevak Sangh conveyed to the chief minister early this week at a midnight meeting that at least 60 of the 165 seats the BJP had won in 2013, in a House of 230, had turned unsafe.

Chouhan had dropped in at the Sangh’s Bhopal headquarters to discuss how to salvage the situation in the few days left before the November 28 polling.

The Sangh had already activated its network across the state after the Congress declared in its manifesto that if it came to power, it would not allow Sangh shakhas (assemblies) on official premises.

Special squads were formed after the meeting with Chouhan to persuade at least the traditional BJP voters to forgive the party’s mistakes. Frantic outreach meetings are now being held in Sangh-run schools, temples and civic bodies.

Lists of the beneficiaries of state and central government welfare schemes have been given to Sangh cadres, who are campaigning door to door to remind people about these programmes, from the Ladli Laxmi Yojana and housing loans to cheap food and cooking gas.

The NaMo App and thousands of favourable WhatsApp groups have been pressed into the campaign.

The Sangh has already classified households in every booth into A (diehard supporters), B (fence-sitters and those angry but still supporting) and C (supporters of rival parties) to enable targeted campaigning. This saves the campaigners’ time and resources and makes the task of bringing voters to the polling booths easier.

But the BJP’s biggest problem is that the upper caste youth is not ready to forgive it for enacting a law to bypass the Supreme Court’s dilution of the SC/ST Atrocities Act. In a perverse retaliation, many upper caste youths are demanding that the reservation system be scrapped altogether.

Outside an academic coaching centre at the MP Nagar market, most of the young men and women condemned reservations and vowed to punish the BJP for the “betrayal” (over the atrocity law).

Anurag Singh Thakur, who is preparing for various competitive exams, summed up the mood: “The BJP and the Congress appear to support reservation. So, the upper caste youth will back the candidates fielded by the Sapaks (Samanya Pichhada Alpsankhyak Kalyan Samaj) party or take the Nota (none of the above) option.”

Asked about the feelings of students from the lower castes, Thakur said: “They are our friends. They understand it is about justice and not enmity with them.”

Sapaks took out a full-page newspaper advertisement on Saturday asking voters whether they didn’t want freedom from caste-based reservations and warning them of victimisation under the strengthened SC/ST Act.

A major slice of opinion among the elite too should be worrying the BJP.

Rajendra Kothari, who retired as vice-president of an export major and has turned a firebrand social activist, said the ruling party’s fortunes were going downhill because the people had woken up to its false propaganda.

“Their image, their agenda, their accomplishments, everything is fake. Both Narendra Modi and Shivraj Chouhan used the media to hide the truth but finally the people have realised the truth after experiencing their rule,” he said.

“If you ask questions, their reply is, ‘What was the situation in (Congress chief minister) Digvijaya Singh’s time?’ Or they say, ‘Hindus are in danger.’ What’s going on?”

Kothari sees the situation as the BJP losing, not so much as the Congress winning.

“They (the BJP) have told us they are fighting black money. Then we hear that hundreds of crores are being spent on electioneering and buying MLAs,” he said.

“Somebody told me the other day that Rs 4 crore had been spent on a religious function and bhandara (sacramental food). I hope they are not using cheques at the temples.”

Similar arguments can be heard on the streets too. Still, to many in the slums, markets and drawing rooms, it continues to be a contest “too close to call”.