At any given point the Bilal Bagh vigil is attended by at least 100 people, which go up to over 1,000 in the evening 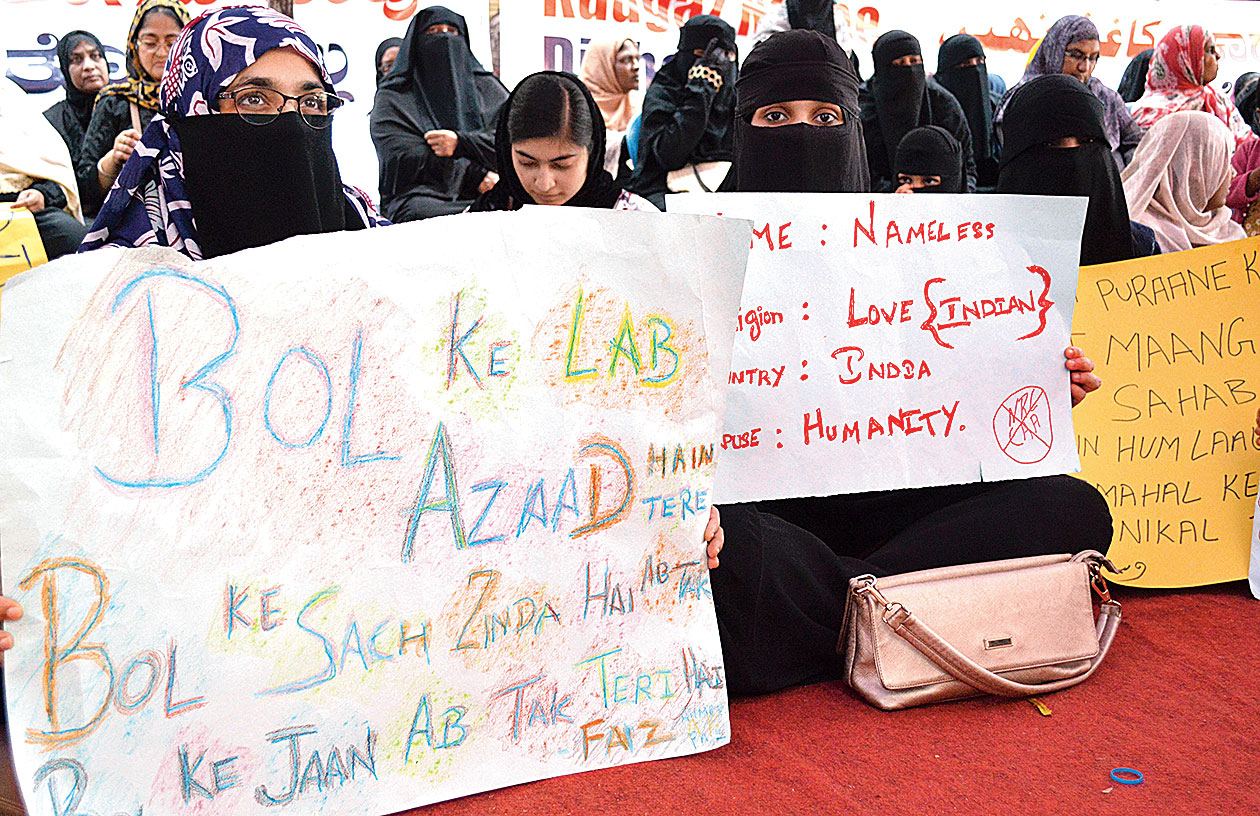 A women’s vigil inspired by the Shaheen Bagh protest in Delhi is underway for the past three days in the tech city of Bangalore against the Centre’s new citizenship matrix.

Located near the famous Bilal mosque on the busy Tannery Road in east Bangalore, the venue has been carved out by blocking one of the many crossroads. The protesters have called the vigil Bilal Bagh, a nod to Shaheen Bagh.

The sit-in, which began on Saturday, has already become a go-to place for all those who believe that the citizenship regime must be overthrown.

Located in a busy area dotted with shops and workshops, the women sit under a big tent and chant slogans and listen to speeches from their compatriots. The microphone is switched off when the azaan is sounded from the nearby mosque.

After a rather quiet opening on Saturday, Bilal Bagh has been getting support of women from all walks of life and cutting across religious lines. Many of them sit round the clock, while others come and go, yet others troop to the venue after class or work.

Sources said that at any given point the vigil is attended by at least 100 people, which go up to over 1,000 in the evening.

“There are no leaders here. Everyone is an organiser, everyone matters to this movement,” said Warsi, a young burqa-clad woman energetically leading the gathering in chanting slogans against the citizenship matrix, Prime Minister Narendra Modi and Union home minister Amit Shah.

“We don’t need another leader after the one that we elected became a ‘chowkidar’ who does nothing for the people,” she said, taking a jibe at Modi.

“What the great women at Shaheen Bagh are doing is our main inspiration. So, like Shaheen Bagh, the agitation here will continue indefinitely,” Warsi added.

“This is a spontaneous act by women who don’t want to depend on anyone, not even political parties. This is our fight and we will not move from here,” she said.

Shobha from the All India Mahila Sanskritik Sanghatan of the Socialist Unity Centre of India (SUCI) said the protesters did not wait for police permission.

“The government has made it difficult to get police permission for people to exercise their fundamental rights. So we just came here and started protesting,” she said.

The local police make frequent visits to Bilal Bagh and check with the women if everything is all right.

Cooperation from the Muslim-majority area has helped the women to organise basic amenities. “We have arranged for a prayer room, cooked food, water and washrooms with the help of the local people,” Shobha said.

Men from the area have come in solidarity with the women and also keep watch at night. “We have nothing to worry as our brothers are always here for our safety,” Shobha said.

Student activist Sadiq, who has become a familiar face at most protests against the citizenship law, has joined the vigil. “ I am not going to move from here till this is over,” he said. “All of us are going to be here in solidarity with our mothers and sisters.”

Corinne Kumar, an elderly Kashmiri who has been participating in vigil against the Citizenship (Amendment) Act in Bangalore, described the nationwide protests as “the second freedom struggle”.

Having witnessed the Jasmine Revolution in Tunisia which forced long-serving President Zine El Abidine Ben Ali to step down and shook up the Arab world, Corinne saw a similarity with the ongoing protests in India.

“We can see a large number of youths and students leading the protests across our country. That’s how the Jasmine Revolution and the Arab Spring spread to Egypt (in 2011-2012),” she said. “This is leading us to a new political imagination, as women like this are challenging the paradigm of a unitary leader,” Corinne added.

Advocate Sheela Rao is also taking part in the Bilal Bagh vigil to tell the people about their fundamental rights that allow them to protest.

“The Centre has already denied and violated fundamental rights enshrined in the Constitution by enacting this draconian law which will affect everyone, not just Muslims,” said the senior lawyer.

“We are educating the people on how the CAA, NPR and NRC infringe on our basic rights. The government cannot trouble the citizens in the name of finding out illegal immigrants, which is a police job,” Sheela added.