Advertisement
Home / India / A change of course and heart

A change of course and heart

After Jamia nightmare, some see rays of hope 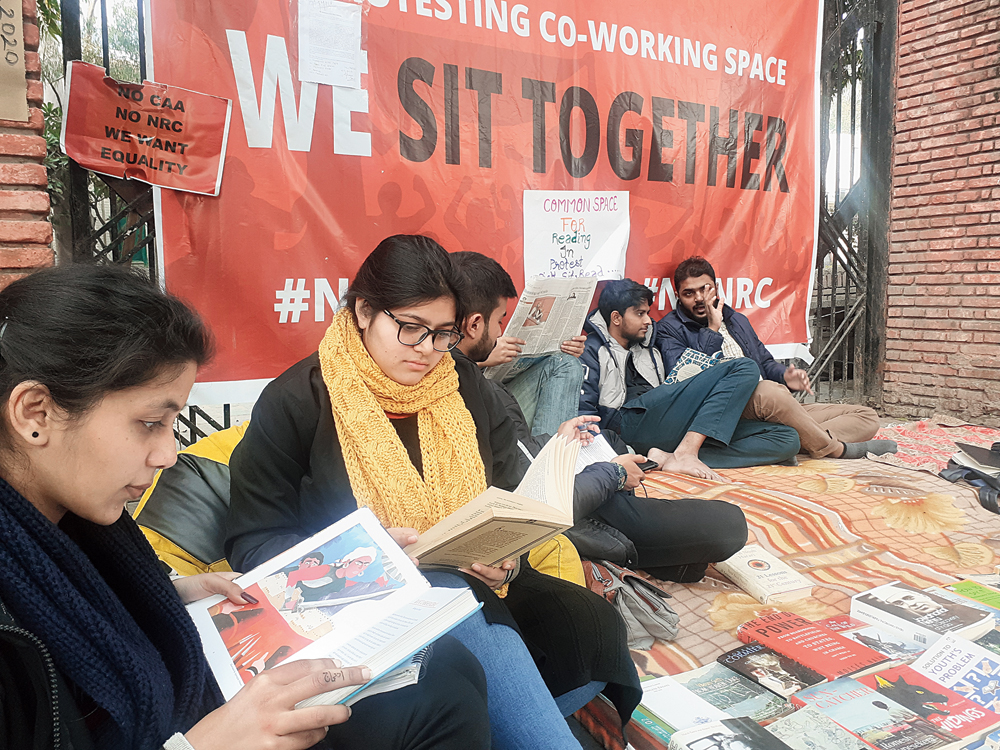 Till a month ago, Hashmat Naiyareen wanted to go abroad to study and work. Delhi police have changed her mind.

The MA (mass communication) student at Jamia Millia Islamia, a native of Champaran in Bihar, was among the lucky few at the Zakir Husain Library to come out unscathed from the December 15 police raid.

While she was hiding with more than 60 others on the first floor of the library, choking on tear smoke, her journalistic training had kicked in and she began sending whatever videos she had of the police action to “honest” journalists she knew.

“I always wanted to go abroad and be a good journalist. I’ve now decided not to leave until I make this country right. I don’t want to leave my country in such a plight,” she told The Telegraph, sitting at the protest site outside Jamia, reading a translated collection of stories by Malayalam author and freedom fighter Vaikom Muhammad Basheer.

Naiyareen went on: “I was unable to sleep for a fortnight after the raid. I saw students being brutally thrashed. We were made to walk out of campus with our bags on our head and we just kept walking into unknown streets at night till we felt sure there were no more police around.”

Naiyareen and her friend Tehreem Roshan, an MA (development communication) student from Meerut, feel even more encouraged to stay on after Tuesday’s Delhi High Court order on a public interest plea that asked the nearby Shaheen Bagh to be cleared of protesters.

A division bench headed by Chief Justice D.N. Patel declined to issue any specific directions and left it to “the wisdom of the police”, saying they had all the powers to control agitations and traffic keeping in mind “the larger public interest”.

Hearing Azad’s bail plea, additional sessions judge Kamini Lau had said he had a constitutional right to protest. (On Wednesday, Azad was granted bail but the court laid down some unusual restrictions.)

Roshan said: “Even if the government does not care, we feel that our voice is at least reaching the judiciary. We were losing our hope in the judiciary, too, but something has been happening over the past few days.”

“She added: Seeing a protest against the CAA by Supreme Court lawyers also gave us a feeling that we are not the only ones protesting.”

Both Naiyareen and Roshan spend time at the Read for Revolution, an open library started by master’s students Tanya Sablok and Sahil Ahmad beside the protest site, Gate 7. It has a beanbag and several books, many of them donated by author Arundhati Roy who had come to support the agitation recently.

“We come to this protest because people coming from anywhere give us hope. Even the local children know what the CAA is, and why students are protesting,” said Roshan, who was reading Aparna Jain’s Like A Girl.

A group of Punjabi peasants who had come with several quintals of wheat and milk to support the protest at Shaheen Bagh also marched to Jamia.

Among the protesters outside Jamia was neighbourhood resident Imran Khan, who had come with his two little daughters. He wore a skullcap, white teeka and symbols of other religions and carried a Tricolour in protest against Prime Minister Narendra Modi’s comment that the citizenship protesters could be identified from their clothes.

“I felt I had lost my identity when the PM said that. I now need to carry a Tricolour to show I am an Indian,” he said.

“My grandfathers were freedom fighters. My maternal grandfather Mehndi Hassan was sent to the Cellular Jail (in the Andamans). I raised my daughters as secular Indians. Today I fear for the future of India.”

He feels heartened by the high court order. “The high court could have said, ‘Move them’. But it’s order nudges the police to talk to us,” he said.

“I feel sorry for those who say that we are causing a traffic jam. You never complain about the jams and the stopping of ambulances when the PM passes by.”

For the past few weeks, the roads around home minister Amit Shah’s home in Lutyens Delhi have been barricaded, causing traffic snarls in the heart of the capital.

Khan’s daughters are in Classes I and VII at the Kendriya Vidyalaya, Andrews Ganj. They have not rejoined school after the winter vacations ended this week.

Ahra, the elder, said: “We don’t want the country divided on the basis of religion. We have read everything the newspapers say about the new law.”

Central Bank of India’s Jasola branch is the only commercial establishment functioning out of G.D. Birla Marg, the site of the Shaheen Bagh protest in southeast Delhi and which the police have cordoned off.

It’s senior manager, Mohammad Shoaib, who used to drive to work from Noida, now takes the Metro. He said the cash vans cannot get through the police barricades, and it’s against their procedure to use smaller lanes.

So, the branch disburses cash with the deposits it receives. Customers seeking higher withdrawals are directed to nearby branches.

“We came on December 16 and saw the huge protest. So we pulled our shutters half down. We know the local people as we are the only bank on this road. They assured us they had no intention of harming the bank,” he said.

“We have worked on all the working days since then.… Those of us who come on our own vehicles (through the lanes of Shaheen Bagh) now have no problem finding parking space.”

The bank staff, most of whom are Hindu, assured this reporter the crowd outside had never threatened them. Social media, however, is abuzz with communal propaganda against the Shaheen Bagh sit-in by women, and the others like it at Kureji in east Delhi and at Seelampur and Jaffrabad in northeast Delhi.

The police have repeatedly appealed to the protesters to vacate the sites and have been talking to community leaders to persuade the women to leave.

“We never ordered the shops to close. When we began, one carriageway was open. It’s the police who have barricaded the road,” Shaheen Kausar, one of the leaders of the Shaheen Bagh agitation, told this newspaper.

“The station house officer (of Shaheen Bagh police station) came recently and said we should vacate one side of the road. We asked him to send a government representative.”

Kausar continued: “We are women with children in our arms and are intelligent enough to know when the country is in danger. Not one stone has been thrown from here, but we won’t move till the government assures us that the law would be repealed. The high court has made it clear that the responsibility for law and order is the police’s. We have not broken the law.”