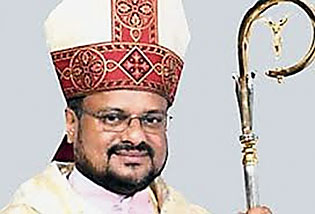 Investigators probing a nun’s allegation of rape against Bishop Franco Mulakkal subjected him to yet another marathon grilling session on a day the Vatican took the embattled clergyman off his pastoral duties.

Thursday’s seven-hour quiz at the crime branch office in Tripunithura in Ernakulam — after Wednesday’s interrogation that had also stretched for seven hours — set off a buzz that police in Kerala were closing in on a possible arrest.

State police chief Loknath Behera hinted as much. “There is no such law that would stop an arrest,” the DGP told reporters.

Behera had been asked if the plea for anticipatory bail Mulakkal has filed in Kerala High Court would come in the way of an immediate arrest.

The court is set to hear the plea on September 25.

On Thursday, Rome appointed Right Reverend Agnelo Rufino Gracias, the auxiliary bishop of the Mumbai diocese, as the apostolic administrator of the Jalandhar diocese that Mulakkal had headed till a few days back.

The move followed a request Mulakkal had sent last week while handing over his administrative responsibilities to a senior priest.

The Catholic Bishops Conference of India confirmed the communiqué from the Apostolic Nunciature, or the Vatican’s diplomatic mission, in Delhi.

In Kochi, protesting nuns who have been on a sit-in since September 8 demanding justice for the victim, welcomed the Pope’s consent on removing Mulakkal.

“We are very happy (about the action). It now appears we are heading to victory,” Sister Anupama, one of the nuns, told reporters from the protest site.

The victim nun has accused Mulakkal of sexually assaulting her at least a dozen times between 2014 and 2016.

Late on Thursday evening, the police chief of Kerala’s Kottayam district, where the nun has alleged she was raped for the first time, told reporters the interrogation would continue on Friday.

The bishop, Harishankar said, had been summoned to appear at 10.30am at the crime branch office in Tripunithura in Ernakulam, the same venue he was questioned on Wednesday and Thursday.

Asked about the possibility of an arrest on Friday, the officer said: “The next decision will be taken only after completion of the interrogation.”

Sources said the interrogators who had grilled the bishop on Wednesday changed their strategy on Thursday by cross-questioning him to check for variations in his responses so far from the time he was questioned at the Bishop’s House in Jalandhar, Punjab, on August 13. The bishop, they said, kept repeating his innocence and claiming he was a victim of a conspiracy.

Police sources said they had already secured evidence to prove Mulakkal’s presence at a church facility where the alleged rapes took place, though the clergyman insists he had never stayed at the place overnight.

The nun had in her complaint and statement told the police the first rape happened on the night of May 5, 2014, at a church facility in Kuravilangad in Kottayam. The bishop says he was at another facility in Idukki, around 100km away, that night.

The sources, however, said the evidence with the police concurred with the nun’s version. Apart from entries in the register at the Kuravilangad facility, Mulakkal’s mobile tower locations were also a giveaway, they said.