The arrested include Sumit Jaiswal Modi, photographed escaping from the Thar jeep that was leading the convoy that crushed to death four farmers and a journalist 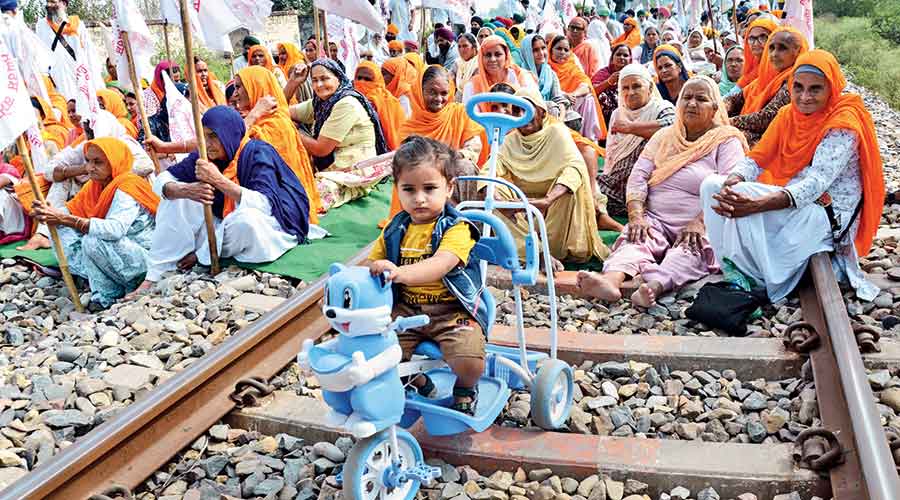 Farmers sit on tracks at Devi Dass Pura in Amritsar on Monday as part of the Samyukta Kisan Morcha’s “rail roko” protest demanding the dismissal and arrest of Union minister Ajay Mishra in connection with the Lakhimpur Kheri carnage.
PTI
Piyush Srivastava   |   Lucknow   |   Published 19.10.21, 01:25 AM

Four persons were arrested by Uttar Pradesh police on Monday evening in connection with the October 3 massacre at Tikunia in Lakhimpur Kheri.

The arrested include Sumit Jaiswal Modi, photographed escaping from the Thar jeep that was leading the convoy that crushed to death four farmers and a journalist.

Sumit is a councillor of Shivpuri ward in Lakhimpur Kheri and an associate of Union minister of state for home Ajay Mishra Teni, who owns the Thar jeep.

The other three arrested and sent to judicial remand for 14 days are Satya Prakash Tripathi alias Satyam of Kaushambi district, Nandan Bisht and Shishu Pal, both from Lucknow, according to a media release issued by the special investigation team probing the Lakhimpur Kheri massacre.

Besides the Thar, which was allegedly driven by Teni’s son Ashis, there was a Toyota Fortuner and a Mahindra Scorpio in the convoy, which were seen in several video clips, running at full speed on the road where the peasants had gathered. The Thar hit the farmers from behind, ploughed through them and sped off.

Meanwhile, the SIT also summoned 10 farmers to the crime branch office in Lakhimpur Kheri on Monday to interrogate them. Sumit had registered an FIR against 20 unidentified farmers for allegedly lynching the minister’s driver and two BJP workers who were in the convoy.

Mohammad Amaan, a counsel for the farmers, said: “The SIT will have to summon 20 farmers. It called 10 of them at its office on Monday to interrogate them and the remaining would be called in the next two days.”

Police sources said that Shekhar Bharti, driver of Ankit Das, an associate of Teni and owner of the Fortuner, had claimed that Satyam was driving his SUV on October 3. Nandan was also in the Fortuner, they said. Pal was driving the Scorpio, they added.

Ashis, Ankit, Shekhar and three others are already lodged in jail in connection with the incident.