3-month-old among 9 killed in fire in Delhi's Kirari 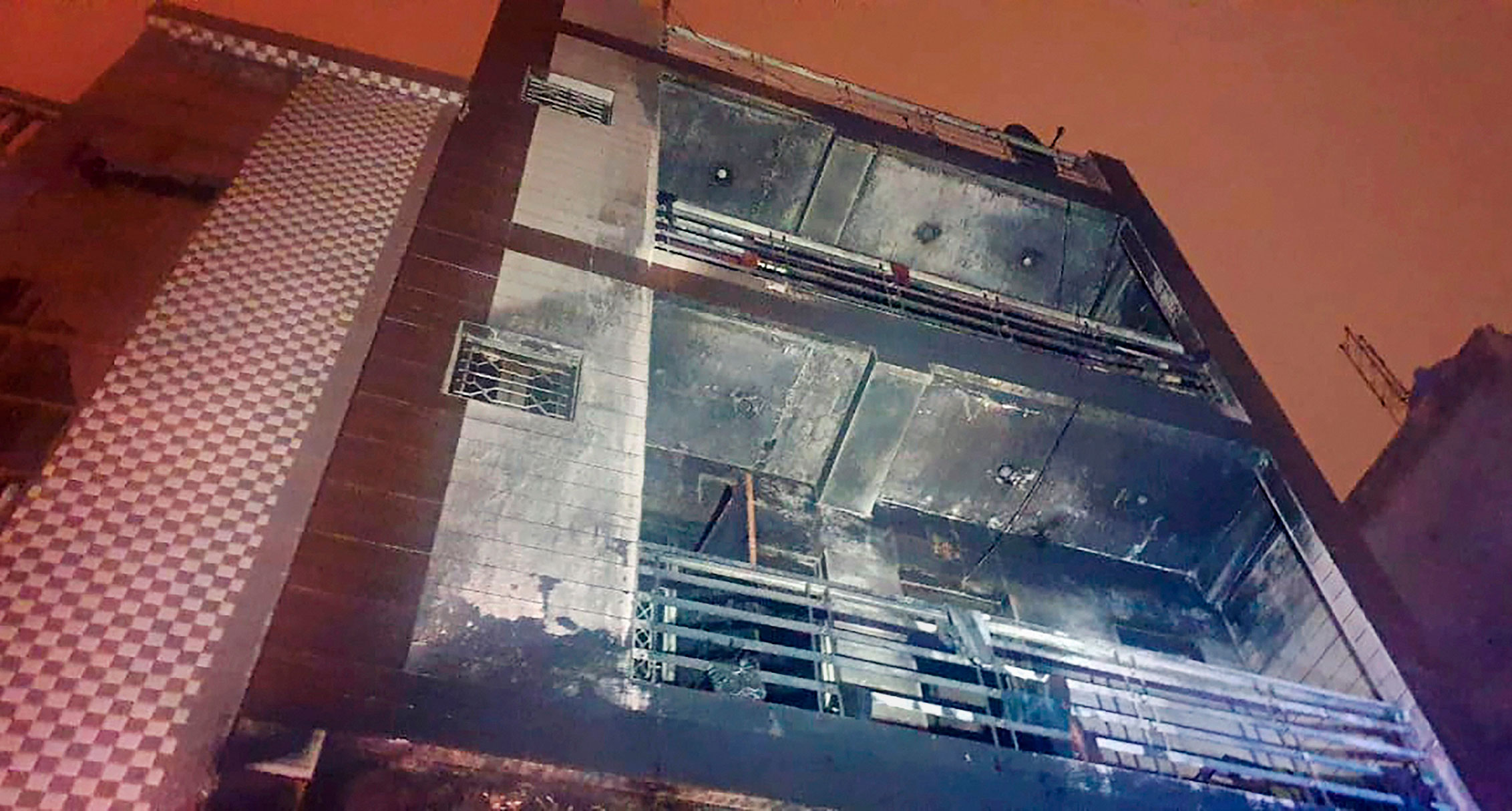 A massive fire broke out at a three-storey residential/commercial building in outer Delhi's Kirari area early on Monday, killing at least nine people, including three children.

Nine fire engines were deployed after a distress call was received at 12.30am and the blaze was brought under control by 3.50am.

No fire safety equipment was found in the building that housed a garment go-down on the ground floor.

During preliminary probe, it was found that the fire started on the ground floor and spread to the upper floors. A cylinder blast on the second floor caused a part of the building to collapse.

It is suspected the fire started due to a short-circuit but the exact cause is being investigated, a fire department official said.

Pooja, 24, her three-year-old daughter Aaradhya and niece Saumya, 10, jumped to an adjacent building to escape.

Those killed in the blaze were identified as the building owner Ram Chandra Jha (65), residents Sudariya Devi (58), Sanju Jha (36), Guddan, Udaykant Chaudhary (33) and his wife Muskan (26), their children Anjali (10), Adarsh (7) and three-month-old Tulsi.

Guddan was the mother-in-law of Vaidnath Jha, the elder brother of Ram Chandra Jha, according to officials who said that Udaykant Chaudhary was a tenant in the building.

Police said three of them were found dead in the corridor on the first floor.

The autopsy of seven people have been completed at Sanjay Gandhi Memorial Hospital in Sultanpuri.

The building owner's younger son said he was in Haridwar when he got to know of the incident.

”I reached Delhi today (on Monday) around 10.30 am and got to know that I have lost my parents and sister-in-law. This is the second tragedy in my family in 2019,” he said.

A senior police official said the single entry-exit point of the building was locked from inside.

The official said it appears that Udaykant, one of the deceased, had locked the gate of his house from inside and died of asphyxia. Had he instead tried to escape through the balcony, the chances of the family's survival would have been more, he added.

However, Chaudhary's relatives alleged foul play, saying he had called them and said somebody had locked the front gate from outside.

The Delhi government announced a Rs 10-lakh compensation to the next of kin of those who died in the Kirari fire. Health Minister Satyendra Jain said the government will also bear the expenses of the treatment given to the injured and will give them Rs one lakh.

”I got to know that nine people have died. One by burn injuries while the eight died due to suffocation. Three are injured and admitted to a hospital. We have ordered an investigation by the SDM. Rs 10 lakh will be given as compensation to the family of every deceased while the government will bear the expenses for treatment of the injured and will give them Rs one lakh,” Jain said.

”It is very unfortunate that nine people have died in the incident and three people are in hospital. I have ordered the official to give me a report about the cause of incident by evening. We are done with the inquiry in the Anaz Mandi incident and will submit the report soon,” Singh said.

”You expect the administration to be a little more sensitive than they are. It is unfortunate that such an incident happened. Mostly poor people from UP and Bihar come here to work in inhuman condition,” former cricketer-turned-politician Kirti Azad said.

Ram Chandra Jha had rented out the ground floor to Vijay Singh Katara, who claimed that clothes worth Rs 20 lakh were gutted in the fire. ”It is a matter of investigation whether the area was being used for commercial purpose. Police will do their investigation and will give their report, following which necessary action will be taken,” said SDM Rohini NSP Tripathi said. Earlier in the day, the fire department said Tulsi was six-month-old. Further investigations are underway, the officials said.