Advertisement
Home / Health / The influence of exercise on the immune system

The influence of exercise on the immune system 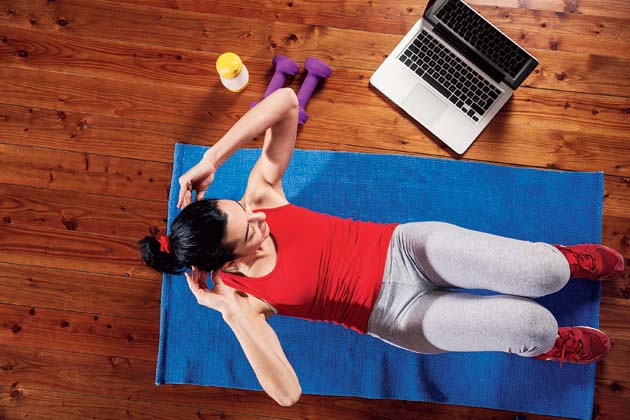 Immunity is the ability of the body to defend against infection and disease. Multiple cells, tissues and molecules make up our immune system. There are primarily two categories of the immune system:

They both work together for the overall functioning of the body. For example, the innate arm (phagocytes) can respond quickly to challenges faced by the body but lacks specificity (it has the same response to all challenges faced by the body). The adaptive response (T and B lymphocytes) on the other hand has both antigen specificity and memory properties but it takes a longer time to adapt. Throughout the lifespan, immune function changes, at birth neither innate nor adaptive immune systems are developed.

During the younger years, the immune system is also challenged by several infectious agents but as the adaptive response is built due to subsequent exposures, infection incidences tend to diminish. However, a decline in cellular and humoral immune function has been observed with age due to poor lifestyle choices, nutritional habits and impaired function of immune cell. This also causes an increase in inflammatory status often associated with the ageing process and can give rise to cardiovascular disease and type 2 diabetes. Therefore, exercise and nutritional modifications are crucial determinants in the effective functioning of the immune system.

The association between physical activity and immunity has been well investigated. More specifically, researchers have investigated the effects of low to moderate-intensity endurance-based physical activity on the immune system. For example, it was reported that acute bouts of moderate cycling for one hour has been shown to increase the capacity of blood neutrophils (phagocytic cells) to respond receptor-independent and receptor-dependent in vitro stimulation. Previous studies have reported that a duration of 12 to 15 weeks of moderate exercise (for example, 30-45 minutes at 60-75 per cent heart rate reserve, five times a week) resulted in lower upper respiratory tract infection (URTI) in older population compared to sedentary individuals. Longitudinal studies (repeated observation short and long) on general population (18-85 years old) also found that people with moderately active lifestyles had lower incidences of URTI. However, beginners (new to exercise) may initially suffer greater short-term immune disturbance compared to active individuals in response to acute moderate activity due to larger stress response tipping the balance (homeostasis). This may also cause a dropout in adherence due to the short term acute negative response. Therefore, the intensity and volume of any exercise must be gradually increased.

The anti-inflammatory response created by regular moderate physical activity can help the body to protect against chronic inflammatory conditions, such as cardiovascular disease, type 2 diabetes and obesity. It has been suggested that moderate-intensity activities can induce heightened type 1 responses (cell mediating immune response).

It is documented that type 1 responses have a protective mechanism against viral infection. Moreover, longitudinal studies (0.5 to four years) have reported that moderate activities (cycling or walking 30 minutes a day) can reverse type 1 lymphocytes and cytokines that seem to decline in the older population. Besides, studies (16 weeks) have also reported that moderate-intensity aerobic exercises can mediate the resting levels of other immune parameters in the circulatory and mucosal (saliva) compartments such as restoring plasma immunoglobulin (Ig) levels or preventing further age-related decline in salivary concentrations in the elderly. Therefore, based on the available evidence, regular moderate exercise three to five times a week for a duration of 30-45 minutes of aerobic activity can be useful for the effective functioning of the immune system, particularly in the elderly population.

In comparison, resistance training has been studied less with regards to the immune system. Previous researchers have found an increase in circulation of natural killer cells, and phagocytes (monocytes and neutrophils) post resistance training. More specifically, researchers have reported that bouts of light to moderate intensity (65 per cent of repetition max) resistance training (lower body with contraction speed of two second concentric, three second eccentric with 90 second rest) can acutely increase white blood cells, neutrophils, and monocytes (adaptive immunity) immediately after the exercise session in both trained and untrained males.

However, the study did not have a control group with another form of physical activity to compare with. In contrast, a study that investigated the effects of resistance training on the immune system in women, found that 10 weeks of resistance training (three times a week light to moderate intensity lower-body exercises) did not influence resting immune markers. This may be attributed to the fact that the study did not include eccentric focus training.

Kaushik Talukdar is founder and CEO of Athlete Institute (www.athlete.institute) and a PhD scholar (Exercise and Sports Science). He tweets @coachkaushik and you can reach him at kaushik@athlete.institute