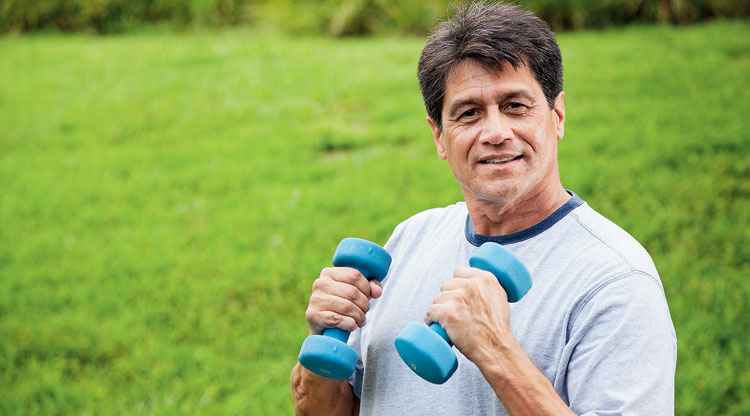 Hot flashes. Raging moods. They’re symptoms typically associated with midlife hormonal bedlam. But hormones control so much more, from our energy and metabolism to how we build muscle. Hormonal changes are an inevitable part of ageing but these can be influenced by the choices we make. Namely, how we move and what we eat.

“As we get older, exercise is key,” says Dr Richard Quinton, consultant and senior lecturer in endocrinology at Newcastle University, UK. “Hormones are important to physical fitness but while they change with age, exercise can have similar benefits to what hormones do and help make up for some of those age-related changes.”

“As people get older, they get more resistant to insulin,” says Dr Quintan. This means your cells are less able to use this hormone effectively, leading to high blood sugar, weight gain around the middle, and an increased risk of type 2 diabetes and heart disease. “Exercise, however, can be transformative for insulin resistance,” he explains. A study published in the Journal of Obesity and Weight Loss concluded that not only did exercise help insulin resistance, it also influenced the way our muscles use glucose.

Can diet help? “Research suggests that eating more in the morning, followed by smaller meals as the day progresses, may be more favourable in terms of insulin sensitivity,” says Rick Miller, a clinical and sports dietitian. “This is especially important as we get older and insulin sensitivity goes down.”

If you’re perimenopausal — the decade prior to the menopause —your oestrogen levels fluctuate dramatically, says Miller, which is going to affect your weight.

“As oestrogen levels fall, muscle cells become less sensitive to blood glucose changes, leading to insulin resistance,” says Miller. “This leads to an increase in appetite, especially for sweet and carbohydrate-rich foods, making the cycle worse.” So, what to do about it?

“Choose smaller portions of starchy and wholegrain carbohydrates such as sweet potatoes, rice and quinoa, healthy fats such as avocados, olives, olive oil or nuts or seeds and a source of protein such as meat, fish, eggs, lentils, beans, pulses or tofu at each meal.”

Once your menopause hits, oestrogen levels fall off a cliff edge. The two most important effects of this are weakening bone mineral density and the loss of the heart-protective effects of oestrogen, explains Greg Whyte, a sports scientist. “Exercise can impact both, particularly walking or jogging, with a couple of sessions of circuit training that gets you sweaty with some weights.”

Indeed, resistance training twice a week has been shown to help strengthen bones, as a 2017 study on 101 women found.

Katherine Brooke-Wavell, senior lecturer in human biology at Loughborough University, UK, said the study provided evidence that brief circuit training exercises involving weights or jumping can improve spine and hip bone density in postmenopausal women, so may have a role in prevention of osteoporotic fracture. “Racket sports such as tennis are great for bones and the heart, too,” Whyte explains.

“We talk a lot about the menopause but men go through a similar process, something we term the somatopause,” says Whyte. “Falling testosterone is important, but another key hormone responsible is the reduction in human growth hormone middle-aged men are experiencing.”

Human growth hormone (HGH) is important for muscle growth and fat metabolism. Levels of HGH begin to decline in our mid-20s, but according to Whyte, declining levels in middle-aged men has a profound effect. “This combination in men over 40 of reduced testosterone and falling HGH affects things like strength and mobility, along with central adiposity. In fact, that belly traditionally attributed to beer is in fact linked with this fall in HGH,” Whyte asserts.

“As HGH goes down, muscle tissue starts to develop an ‘anabolic resistance’, which means it becomes more resistant to muscle building,” says Rick Miller. “This means that whatever amount of protein we used to eat when we were younger has less impact on maintaining muscle than before.” So eat more protein in midlife, aiming for 1g per 1kg of body weight.

Middle age is also the time most of us face a peak in stress hormones, especially cortisol. “Increased cortisol levels over a long period can contribute to weight gain,” says Dr Quintan. Cortisol starts to get destructive when its levels are chronically raised, due to a grinding, underlying stressor that doesn’t seem to have an endpoint. Think a bad marriage or thankless job.

Exercise raises cortisol levels in the short-term, bringing them back to normal after recovery. But that’s healthy, because it provides your body with a stressor to which it’s forced to adapt by becoming stronger and fitter.

“Much of that occurs during sleep and rest,” Whyte says. “That’s why recovery is essential for over-40s exercisers. The older we get the more seriously we should ensure that we’re sleeping enough, rehydrating properly, eating enough protein, and taking 48 hours off between bouts of heavy strength training to help muscles recover. You can do active recovery during these times, with low-intensity walks or swims, but you have to let muscles rest and recharge.”