On paper, twin weights off school kids’ back

Children must not be overburdened with too many subjects, says Centre 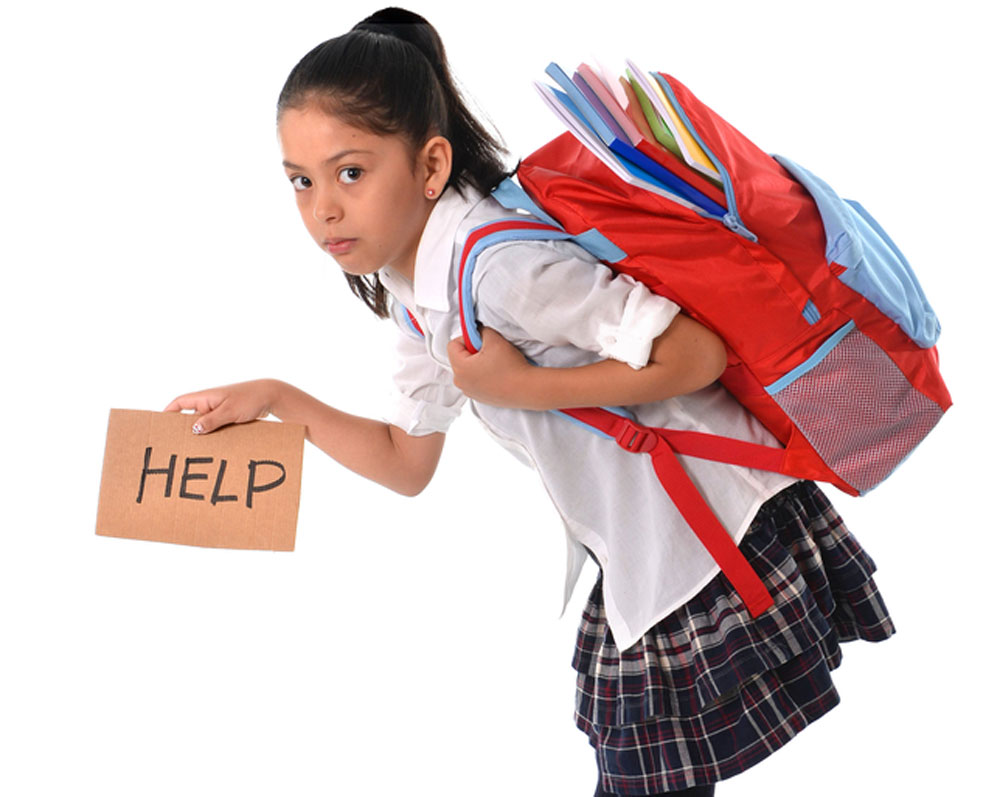 A statement from the American Academy of Sleep Medicine, published in the Journal of Clinical Sleep Medicine in 2016, had said that children aged three to five should sleep 10 to 13 hours every day. Those aged 6 to 12 should sleep 9 to 12 hours and teens between 13 and 18 years, 8 to 10 hours.

Regularly sleeping less than the recommended hours can lead to problems with attention, behaviour and learning.

“It would not be an overstatement if it is said that over-ambitious parents are also responsible for spoiling the childhood and joy of learning,” the judgment said.

“Thrusting something in the name of education, at an inappropriate age, would amount to violating the fundamental rights and basic human rights of children.”

The court added that children should not be made — or even allowed — to hold pencils till they had attained five years.

The Kendriya Vidyalaya Sangathan had in 2009 issued limits on the schoolbag weight that were marginally higher than Telangana’s at 2kg (Classes I and II), 3kg (III and IV), 4kg (V to VII) and 6kg (VIII to XII).

In September 2016, the Central Board of Secondary Education had prohibited homework and schoolbags for Class I and Class II children altogether. However, Ashok Agrawal, president of the All India Parents Association, complained that the board did not monitor whether the schools were following the directives.

As for the mathematics-and-language-only norm for Classes I and II, the National Council of Educational Research and Training, whose advice is not binding on school boards, had prescribed it as early as 2006.

The Centre has asked all states to restrict the weight of schoolbags and ensure that schools don’t set homework for Class I and Class II children so they have time to play and get a full night’s sleep.

Last month’s directive from the human resource development ministry also asked the states and Union territories to ensure their school boards only allowed the teaching of mathematics and language in Classes I and II. It said environmental studies could be added in Classes III to V.

The ministry’s advisories are usually not binding on the states or their school boards but these constraints on schoolbag weight, homework and syllabuses were directed by Madras High Court, which asked the Centre to issue appropriate orders.

According to the ministry directive, the states should follow the schoolbag norms laid down by the governments of Telangana or Maharashtra. Telangana has absolute class-wise ceilings for the weight of schoolbags (see chart) while Maharashtra says the bags should not weigh more than 10 per cent of the child’s weight.

Ministry sources said that several states and Union territories had already issued orders to their school boards in keeping with the central directive.

Sources in Calcutta said that neither the ICSE council nor the Bengal government had any norms relating to schoolbag weight or homework.

“We recently framed the curriculum from preschool up to Class VIII, ensuring there is less rote learning and the focus is on classroom learning and real-life situations,” said Gerry Arathoon, chief executive and secretary, Council for the Indian School Certificate Examinations.

Manik Bhattacharya, president of the West Bengal Board of Primary Education, said the board had not received the ministry circular.

“The board has no instructions for the schools in the matter but teachers are encouraged not to set homework but to focus on classroom teaching,” he said.

Madras High Court had passed the judgment in May. A lawyer, M. Purushothaman, had petitioned the court contending that the Central Board of Secondary Education had prescribed subjects like grammar and computer science for Class I children, which were not part of the National Council of Educational Research and Training’s curriculum.

Justice N. Kirubakaran held that children have a fundamental right to enjoy their childhood without stress.

“Children should not be overburdened with many subjects. Children are entitled to minimum sleeping hours as per their age… which is a fundamental right as per Article 21 of the Constitution,” the judgment said.

It quoted doctors to say that children aged five or six years need 11 hours of sleep every night. If they leave for school early in the morning, they need to go to bed early, which homework might prevent them doing.