Inspiring: It was six years ago that Eric Burton of Black Pumas performed on the Santa Monica pier. The fact that they were nominated was itself a huge step for the duo. The two describe their music as soulful. While performing Colours, Eric Burton was dressed in a white-and-black jacket, playing jazzy notes. It was Adrian Quesada, the guitarist, who added a bit of rock with his solos. 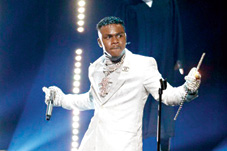 Rags to riches: Much like Black Pumas, the story of DaBaby is also one of hustling through life. Before his performance, DaBaby mentioned in a video clip that he came from a place of “nothing”, where it was hard for him to even get a haircut. For someone who was “up against all odds” it was inspiring to see him being nominated in four categories. Although he didn’t win any, he lived up to his name with a performance of Rockstar in which he orchestrated a choir, creating a fusion with hip-hop, dressed in a white Chanel suit, done up with some spark.

It finally happened: It isn’t only Beyonce who has made a mark in the history of the award ceremony. Mickey Guyton is Grammys’ first Black solo female country nominee. She didn’t win but what a show it was. She performed Black Like Me in a golden gown, backed by a choir, a piano and string instruments. 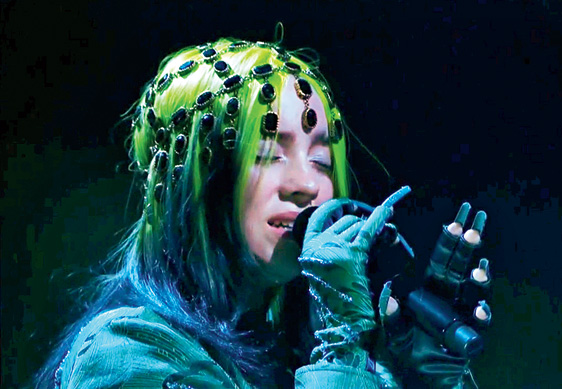 Strong-Minded: Something we really enjoyed about this edition of the Grammys was that the artistes were introducing themselves and their stories before they went on stage to perform. Before Billie Eilish’s performance, in an interview/mini clip made by the organisers, she claimed to being afraid of sleeping because of nightmares, lucid dreaming and sleep paralysis. Her way of taking control or advantage of the situation? Make music... and that’s what she did. The 19-year-old took the stage with her Grammy-nominated song Everything I Wanted. With her brother Finneas on backing vocals and keyboards, she performed atop a “sunken and battered” car. The concept was similar to the music video of the song in which the two sit inside the car while it sinks. Later, Eilish was awarded Record of the Year. She said: “This is really embarrassing. Megan deserves this, you’re unstoppable. You’re beautiful, talented and deserve everything in the world. This goes to Megan.” 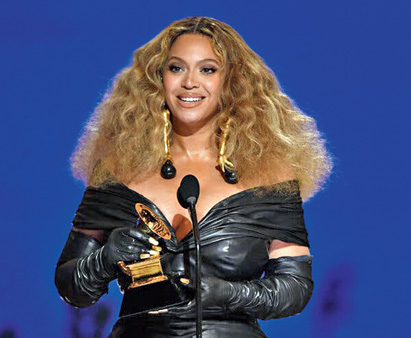 Slaying like a queen: We are just surprised that this did not happen earlier. By collecting much-deserved awards for Best Music Video (Brown Skin Girl), Best Rap Song, Best Rap Performance for Savage remix and Best R&B Performance for Black Parade, Beyonce surpassed the record of Alison Krauss. Queen B currently has 28 Grammys to her name. Not only is this a big win for her but her album Black Parade was in support of small black businesses, making it relevant. “I am honoured and excited. I believe it’s my job as an artiste to reflect our times and it’s been a difficult time. So I wanted to highlight the black kings and queens that inspire the world. I’m working my whole life and this is a magical night,” said Beyonce during her acceptance speech. 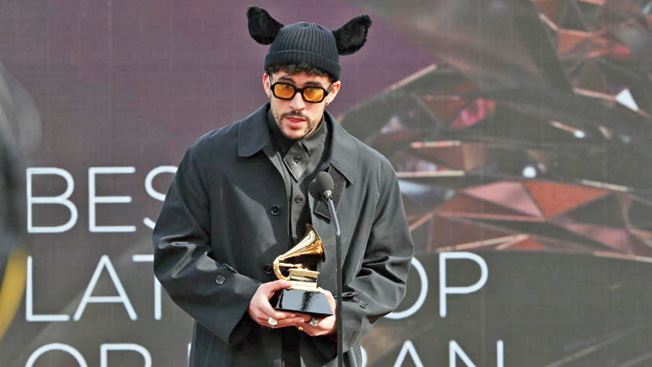 Yes, A win! After being nominated in 2019 and 2020, Bad Bunny finally got his win this year in the Best Latin Pop Album category with YHLQMDLG. Before receiving his award he also put in a performance with Jhay Cortez for Dakiti during which the stage was set up with blue-and-purple lights. 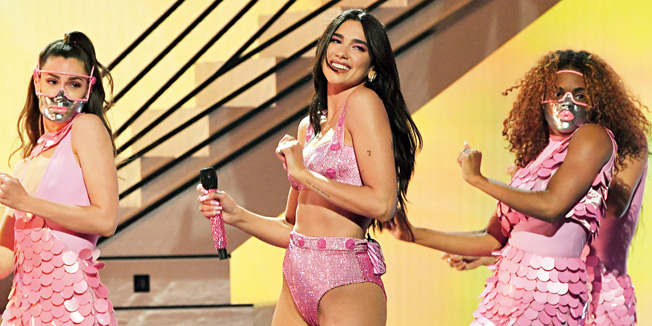 A happy time: It is always fun to see Dua Lipa perform on stage, especially with songs from an album like Future Nostalgia on which most of the songs are happy and fun. At the beginning of her performance, Lipa is seen in a pink gown, singing Levitating, with purple hues behind her. After this DaBaby joins her on stage to rap along with dancers. She takes this off-camera time to quickly slip into a two-piece. She then moves on to Don’t Start Now, which sounded just like the original track minus the echo. After such energetic performances, Dua went on to receive her award for Best Pop Vocal Album which is when she said: “This is insane. Future Nostalgia means the absolute world to me and it changed my life in so many ways but one thing that I really come to realise is how much happiness is important. I got really jaded at the end of my last album; I thought I had to make sad music to make it feel like it mattered. I am so grateful because happiness is something we all deserve,” she said. 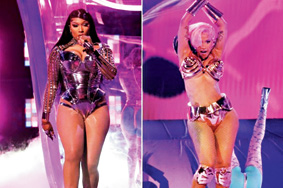 Three times a charm: It was a big night for Megan Thee Stallion, who managed to win trophies for Best New Artiste, Best Rap Song and Best Rap Performance. Although she was also nominated for Best Record of the Year, it was a tough call as Billie Eilish is proving to be a champ at streaming. Nevertheless, she deserves a round of applause for her wins as well as the performance of Savage and WAP. While Megan’s performance started with Savage as soon as she moved into WAP she was joined by Cardi B and if an audience were there, they would not have been able to keep calm. The two powerhouses showed off some stunning moves. We loved how the two of them were comfortable in their skin. “Music helped us get through the pandemic,” she said. She then turned to Beyonce, who was on stage, and said: “I love her work ethic and my mama would always ask me:  ‘What would Beyonce do?’ So I do what Beyonce does but a little more ratchet,” she said. 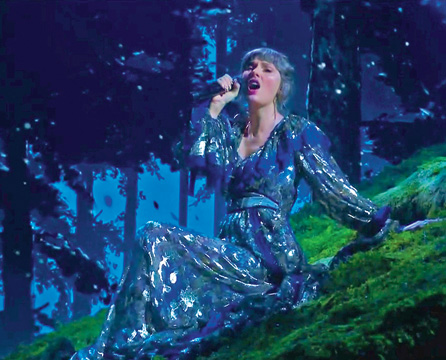 Teamwork: It is almost impossible to not have a music award ceremony without a Taylor Swift performance, especially after how she released her surprise album Folklore during the pandemic. It’s an album that showed her in a different way to the world. Her performance started with Cardigan during which she is seen lying on the grass-covered roof of a collapsible hut and the visuals tried to project a dense forest with snowfall and fireflies. She makes her way inside the hut to join her musicians for August, followed by Willow. Later, she and her team were given the Best Album award for Folklore. It was a bummer to see Taylor go home with just one trophy! “I want to thank all my collaborators on stage. I want to thank Joe (Alwyn) who is the first person to hear my songs when I write them. I had a lot of fun writing songs with you during quarantine. Mostly, we want to thank the fans who met us in this imaginary world that we have created,” said Taylor.

Lone Ranger: After One Direction, Harry Styles pushed himself big time and his Grammy performance (and win) is proof. The singer was the opening act of the evening and, of course, he wowed us with Watermelon Sugar. He looked fresh as ever in his green, floofy scarf and jacket, performing for the first time at the Grammys. Later, he won an award for Watermelon Sugar in the Pop Solo Performance category. “This was the first song we wrote after my first album came out during a day off in Nashville. I would like to thank my manager (Jeffery) Jeff Azoff for nudging me and not pushing me,” said Harry 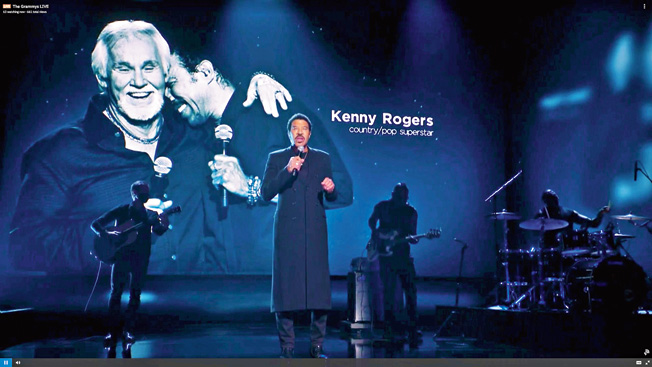 They won’t be forgotten: To bid goodbye to some of the musicians we lost last year, a special montage was prepared. To remember Kenny Rogers, Lionel Richie took the stage to perform Lady. At the end of his performance, he had a message for the iconic country singer: “I miss you Kenny, I miss you man.” This was then followed by a performance by Brandi Carlie who payed tribute to John Prine. The performance was an acoustic one in which she performed I Remember Everything. The ‘In Memoriam’ section ended with Britney Howard and Chris Martin doing a cover of You’ll Never Walk Alone. 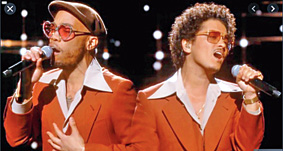 Debuting: This was the first time Anderson Paak  and Bruno Mars, aka Silk Sonic, took centre stage. The two performed their new single Leave The Door Open, which draws inspiration from some old-school love songs. Being their debut, they weren’t going to perform just once. They appeared again to pay tribute to Little Richard who passed away last year. They performed Good Golly Miss Molly and Long Tall Sally. 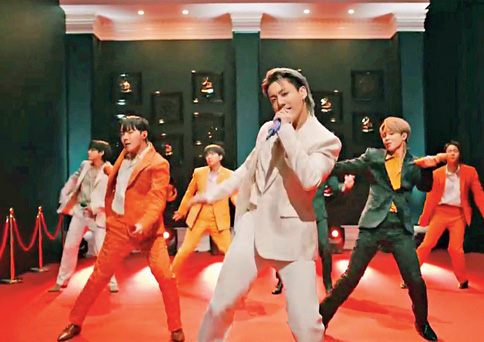 K-POP LOVE: The world got a glimpse of BTS, once again. The group of seven recreated one of the four stages in Staples Centre in Los Angeles and danced their way through different set-ups while performing Dynamite. The boy band climbed all the way to the top of the building and ended their performance on the terrace, filled with lights, energy and a beautiful view of the city. 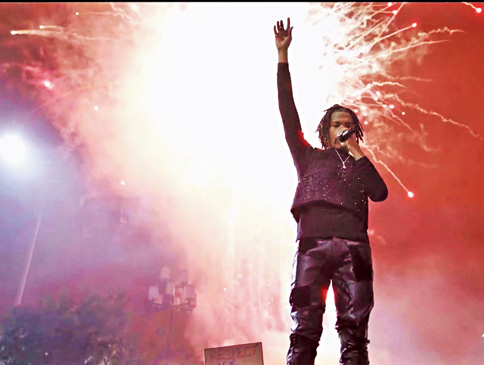 Stronger together: Lil Baby’s performance was hard-hitting. While performing The Bigger Picture, the rapper pointed out the acts of racists and police violence. His performance was a response to the cases of George Floyd and Breonna Taylor and Black Lives Matter. During the performance, rapper Killer Mike, activist Tamika Mallory and actor Kendrick Sampson made an appearance, requesting US President Joe Biden for a safe and secure life for the Black community.